The discovering of Greek Rapture was a great surprise for me. These young guys are delivering very intense, fast, but varied Death/Thrash Metal, with hints of Black Metal as well. Their third full length (Malevolent Demise Incarnation) showcases a very talented outfit. The answers have been given from guitarist/vocalist Apostolos Papadimitriou.

So, Apostolos, what are your views on the current Greek underground scene?

First of all, thank you very much for this interview! Regarding the Greek underground scene, I think that during the last 15 years we can safely say that it is at its best. Extreme Metal in particular has a lot to offer, with some of the best underground acts worldwide such as Dead Congregation, Embrace of Thorns, Death Courier and many more. Moving on to the thrashier side of things there are some amazing bands as well such as Violent Definition and Slaughtered Priest. Since we are all fans of Hardcore Punk and Crust, it should be stressed that the Greek scene is thriving on these genres as well. Check bands like Chaotic End, which is one of the oldest bands in this category but released a great album some years back, or Paroxysm and Cursed Blood, which represent a younger breed.

Would you say that Rotting Christ, Varathron, Necromantia, Septic Flesh, Flame put Greece on the map of metal? Do you consider them influential outfits?

Of course, their importance cannot be underestimated, especially for Rotting Christ, Varathron and Necromantia that led the Black Metal movement. But I would go ahead and add Death Courier, Septicemia and Sarcastic Terror, since they were bands that a lot of people used to talk about back then. Also, I have to say I do not know these by first hand, since I was not even born at that time. It’s information I have acquired by reading old fanzines, interviews, etc.

Please, tell us the history of Rapture so far: how did you get together, have you been involved in any other bands prior to Rapture, your materials etc.!

Rapture is a Death/Thrash band from Athens Greece, currently flying under the banner of the label FDA Records. The band was formed in 2012 and has since released 3 full length albums and various other spin-off releases. During these years the band has established a strong fanbase around the globe and has gathered a series of great reviews, especially for its 2nd and 3rd album. Some have even labeled this releases as modern-day classics of the genre. Moreover, these releases gave Rapture the chance to play gigs across Europe in festival slots and self-organized tours, and sharing the stage with some of the best acts of the underground and mainstream metal scene (Sodom, Vektor, Venom Inc, Stalker, Dead Congregation and more).

Since 2014 you have a stabile, steady line up; does it mean that you are on the same wavelength both musically and humanly? Is there a chemistry among you?

Yes, of course, that is exactly what it means. To be honest, I think that a great part of what we have achieved is owed to this fact. It’s amazing to have people that share the same vision for music (and art in general), touring and even for the way of life. We have been together for almost 8 years now and this has granted us an amazing bond both in terms of music and of personal relationship.

Yes, as their surname suggest. And this has contributed in the aforementioned facts of the previous question, as you can imagine.

When did you start working on your new album? How long did it take you to come up with new material?

In general, it’s safe to say that we are a hard working band, and there are always individual ideas of riffs or lyrics here and there. If I remember correctly, the first song was written right after an amazing gig at Izmir Turkey in April of 2018, which was only 3 months after the release of our second album Paroxysm of Hatred. I think that the whole album was complete a couple of months prior to its recording. However, a lot of ideas were born during the recording sessions as well, and they of course consist a part of the final product. We always experiment and let the compositions “speak” to us.

You entered the Eleventh Tower Studios again, like you did with the previous effort Paroxysm of Hatred. What do you recall of the recording sessions? Were you prepared to record the album?

As you can imagine, we were really satisfied with the outcome of the previous album in terms of production, that’s why we chose to work with Harris (the owner of the studio) once again. He completely understands our sound, our vision about music and he is always willing to experiment with different sounds, techniques and tricks. This has to do with the general “no boundaries” approach that we have as a band. It was a really fun process but really exhausting, since we all have other stuff going on such as university studies, jobs etc. 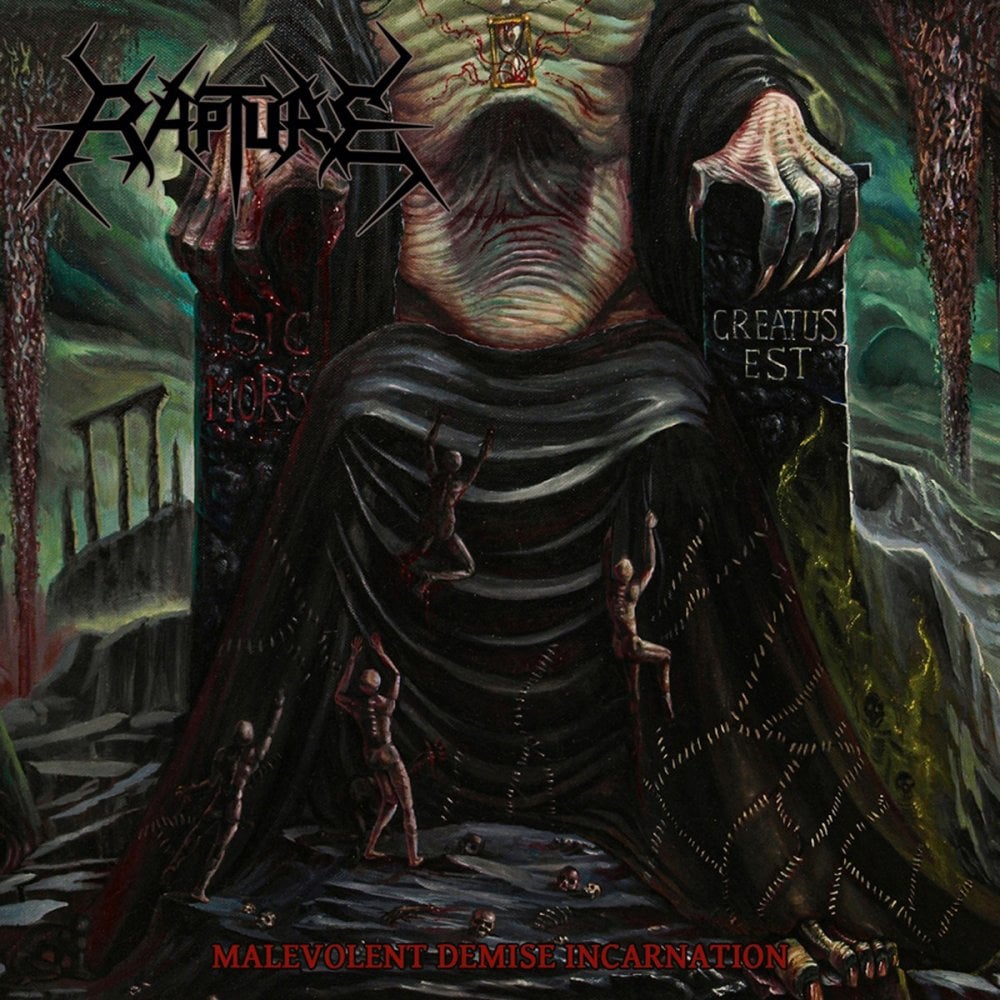 Are these songs full of hooks and satisfying songwriting?

Well, if this is what you think I won’t disagree at all, hahaha. Music is perceived different by each individual. I think that’s highly positive that you find the album full of hooks, because it firstly shows that you have listened to it closely. Moreover, it proves that there is a lot of information if you scratch its surface.

Does the band move between very fast moments in the vein of Solstice, Demolition Hammer, Sadus etc. and mid-tempo sections where creepy melodies and a thicker atmosphere seep in that are much closer to classic American Death Metal like Morbid Angel or Cannibal Corpse?

This is a pretty accurate description to be honest. All the bands you mentioned are hugely influenced us. However I have to stress something that I regularly say. Our music has no boundaries at all. We have a huge variety of influences that are based on what we listen to every day. These range from classical music and jazz to Extreme Metal and Hardcore Punk. But of course, it’s natural for some of these influences to be more apparent (especially bands like Morbid Angel and Demolition Hammer) since we play the genre of deathrash and these are basically some of our favorite bands regardless of what genre they belong to.

In your opinion the high-flying riffs and somber interludes working in tandem to create plenty of memorable moments? Is there a good mixture of paces and moods and the band’s grasp of dynamics and transitions is strong?

Yes, exactly. It’s really nice to have these “mood changes” in the compositions. And of course, the album is best listened as an entire piece of unseparated work. I think this goes for every full length album in recorded history. You have to listen the album in its entirety, the same way you would read a book in its entirety without skipping any chapters.

You flirt a little with Black Metal riffing on After Your Eternity, I Am Become Death or Herald of Defiance, but for the most part you focus on spinning out relentless and well-crafted Death/Thrash, only with tighter performances and more professional songwriting than before. Do you agree with it?

Yes, I agree 100%. And this has to do with the aforementioned facts about our influences. Moreover though, it has to do with how we vision our music. We aim forward all the time and we always want to push everything one or two steps further and higher. We always aim on expanding the variety of the compositions in terms of structure, riffing, and overall experimentations. According to our opinion this is the true spirit of extreme music, and extreme art in general. Boundaries exist only to be broken. 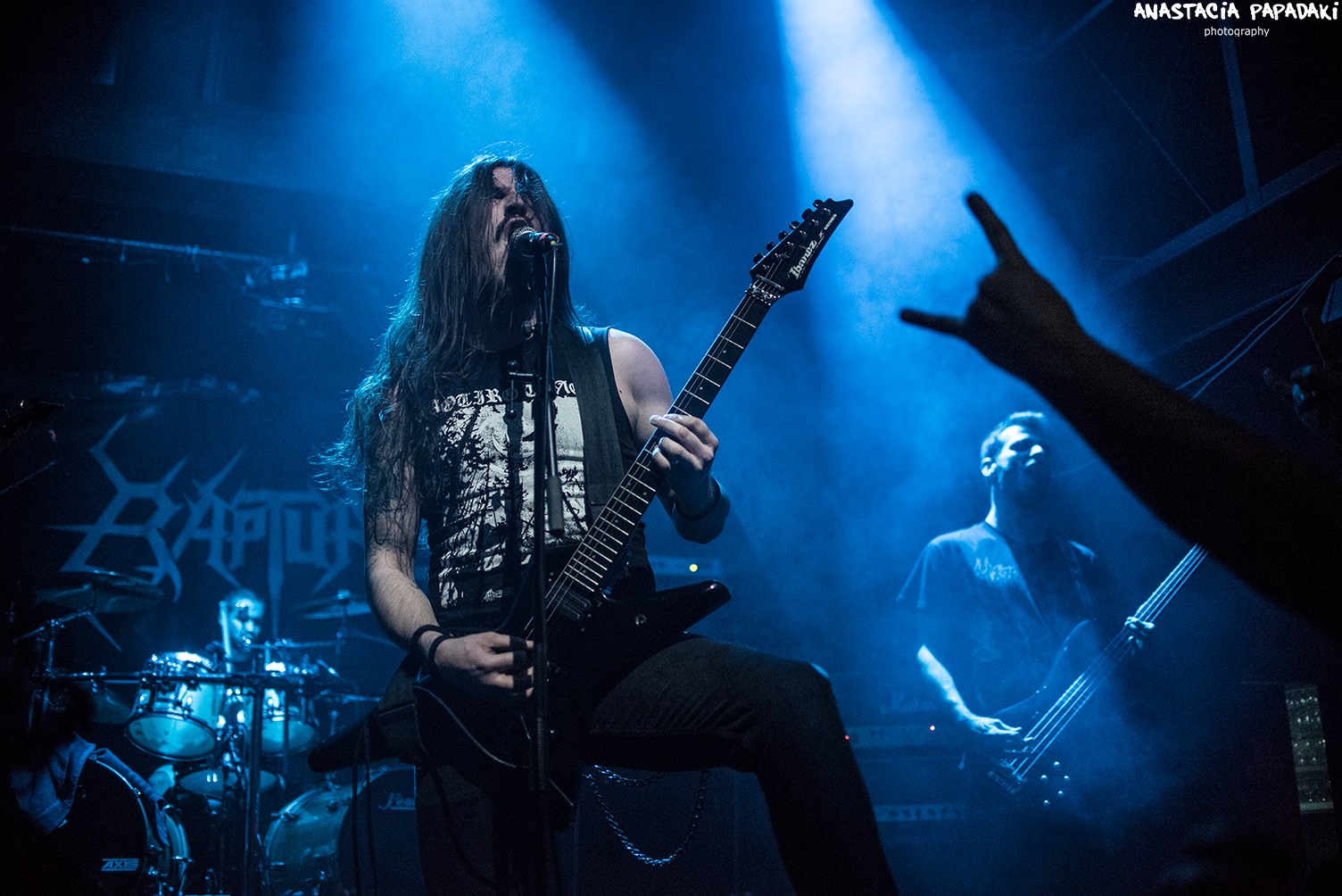 Are the songs built on heavy, meaty riffs and a startling degree of technicality in the musicianship, especially in Giorgos top-notch drum work?

It’s a huge part of our compositions indeed. We want to sound as tight as humanly possible. That’s also a key ingredient of true extreme music. Wanting to always sound better than your yesterday’s self. The highly technical drum parts and riffage are the result of relentless practice sessions. We despise the modern approach of “metal” bands that base their studio outputs on editing. You should always sound as great as you really are. And of course, the live performances MUST be better than the studio outputs.

Like its predecessor Malevolent Demise Incarnation shows no signs of weakness and presented as a direct album without any compromise. Did you develope a lot in terms of skills, songwriting etc.? Where do you find the differences (and/or the similarities) between Paroxysm… and Malevolent…?

To me, and to us it’s a true product of extreme human art, expression and mentality. I think the greatest difference lies in what each of the records wanted to sound like. During the Paroxysm of Hatred sessions, we wanted to sound like an relentless deathrash Armageddon. The difference is that in the latest album, the deathrash element is still apparent and consists the main ingredient, however we expanded our sound creating a more original musical identity.

What kind of feedbacks did you get on the album so far?

Up to now the feedback is great and really heartwarming. It’s really moving to see people from all around the world appreciating something that is basically our artistic offspring.

How about your future plans?

Currently the band’s plans consist of performing live across Europe (and outside of it) as soon as the situation allows it.

Apostolos, thank you for your answers! Any closing words for our readers?

Thank you so much for this interview and for this chance to speak to your readers! We will soon make it to a stage near you to unleash our Deathrash Misanthropy! ONWARDS TO TOTAL DEATH! 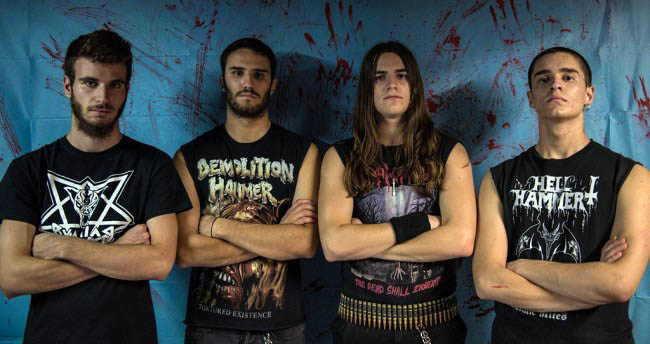