A. C. Wild about Bulldozer’s 35-year-old album The Final Separation

Italian heavy metal bands, like the Spanish, Portuguese, Greek etc. ones never managed to be big or influential, but some of them reached a cult status among the fans. Like Bulldozer, that released their second effort The Final Separation 35 years ago. Bassist/vocalist A. C. Wild gave his answers regarding that record.

A. C., before I ask you about the The Final Separation record, what were your views on the Italian metal scene at the mid 80’s as a whole?

Did it have a strong background in terms of fans, record labels, magazines, festivals etc.?

Not really. Few hundreds fans in the whole country at the time of The Final Separation. With IX the followers increased a lot, while it disappeared abroad because the album was badly accepted outside Italy. In Germany and UK that album was persecuted like a witch at the times of the „holy” inquisition.

Did Italy have a prolific, unique scene at this point?

I don’t think so. I have only bad memories.

Did Italian pioneers of the 80’s era have different approaches to the scene? I mean, Death SS had doom and speed on their side, Bulldozer was raw, extreme and Venom-inspired, Dark Quarterer was considered the founders of epic progressive, Adramelch was the forerunner of power/speed metal, while Hocculta was traditional in the vein of Scorpions…

Death SS was a great pioneer. We have been labeled by Roadrunner as Venom clones to sell our records to Venom fans. I’m a big fan of early Venom but this is not what I felt at that time. I never liked the „Venom clones” label. When we played live in that period (only in Italy because I could not have passport), we had maximum 2 or 3 hundreds fans. The other bands you mentioned were basically ignored; I was friend of Hocculta and Don Andras bought the drums from them. These bands were appreciated as cult bands vears after….

Were you happy to see the Italian scene developing that way just like the other scenes in Europe were doing?

Are you kidding? The Italian scene was „nothing” in comparison with other European countries. It was a kind of „ghetto”, the respect came many years after.

Although the scene went to different places back then they all had the awesome atmospheric Italian touch. Do you agree with it?

When did you start working on The Final Separation and how long did it take you to come up with the new tunes?

At that time we were meeting every fucking day after work. We took several months to write and learn all the material but since we worked basically every day we were ready in less than one year. In that period we played live very very rarely.

Compared to its predecessor, in less than one year was the album released, so it seems you were continuously writing on new songs, correct?

Did you somewhat change on the songwriting process, by the way?

Not really. That was our „natural” evolution. Andy’s melodies developed in the years. I never changed my approach to lyrics in the years. Always personal and real contents.

Were you completely ready and prepared when you entered the Bips Studio in Milano to record the album?

Ready to record but not produce! The performance was OK but sound production much poorer than the previous LP.

Did the label ask you to hear any new material?

Did you use all the tracks you had written for this album or were there any ones that didn’t make get on it?

There were no other songs written and not used.

How much budget did make Roadrunner available to you regarding the recording sessions?

Honesty I don’t remember, but we could cover all costs. 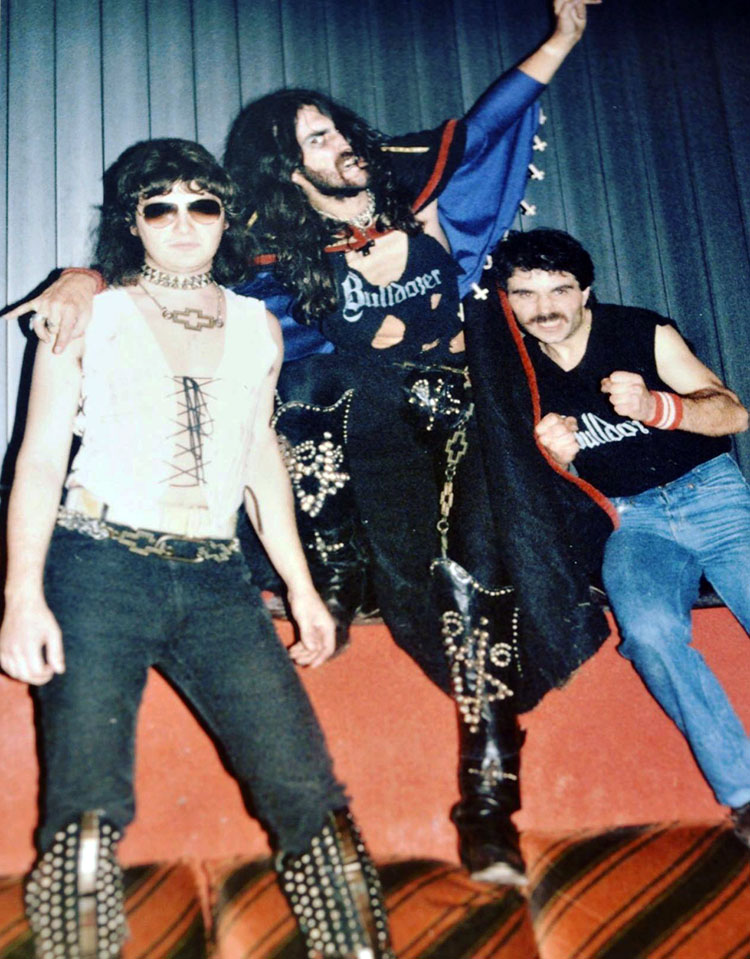 What do you recall of the recording sessions? Were you coming along well with the works?

It’s not so easy to remember. In the same studio we recorded IX and Neurodeliri. My memories are limited and mixed. It happened 35 years ago.

Could you have moved on and unleashed a totally different work, showing evolution, musical prowess, capacity to walk out of the shadows of Venom?

The sound is very different from the previous. Regarding the contents we just made what we felt at that time. Regarding the shadows of Venom I think I was doing everything with instinct without thinking about other bands. Certainly there were music influences but I can’t say we followed a certain path.

Is the Venom worship almost entirely gone by now and Bulldozer has developed more onto their own sound with this release?

Bulldozer always changed its sound, every album is different. I personally loved the early Venom (till the EP 7 Gates of Hell, then not much) but I never worshipped them. The „label” of Venom clones influenced the listeners.

Do you think that it’s not a complete change in style (yet), but the acquired maturity is tangible even after a single year from the debut or did it feature more or less the same characteristics?

Certainly Andy’s compositions were more sophisticated in this album, but I think the sound of TFS is poor. This ruined the album which was really aggressive but sounded weak.

Where do you find the differencies, similarities between the first record and the second one?

My approach to Bulldozer is just instinct and did not change much. Andy made his composition choices. That’s the result. Certainly he had some inspirations/influences but I don’t know. Maybe this album is a compromise between my aggressive instinct and the melodic approach by Andy. But this combination was badly damaged by the weak sound.

Did Bulldozer contain no audible extreme metal elements, unlike your countrymen from Schizo or Necrodeath?

I can say that I never compared Bulldozer elements with Necrodeath and Schizo, both of them are very good friends. The only very extreme track of Bulldozer is The Exorcism which is signed Contini-Panigada, but the concept is 100% mine. In my mind any band can do what they like or feel and I listen to their music without scheme or analystic approach. I’ve been asked recently from some magazine to review albums but I always refused.

The track Don Andras is some kind of joke track dedicated to him and it’s a re-interpretation of a popular song from Naples called Jamme Jà, with different lyrics. Who came up with it?

That’s a funny song about the roots of Don Andras: he’s from Naples’ bad areas where there are lots of crimes. Funny but dramatically realistic. 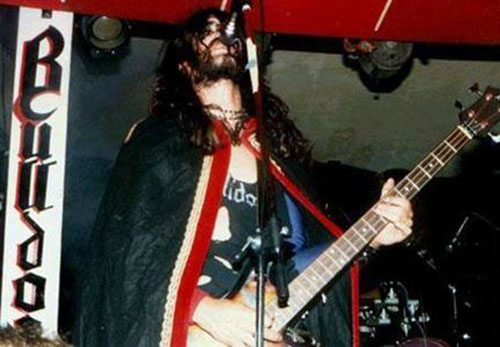 Do you agree with that the The Death of Gods, a long slow-paced piece is possessing a truly devilish atmosphere that’s different from the rest of the album?

That’s an important song with important contents. Unfortunately the production is very poor. It’s not devilish but realistic. It’s a description of human kind along the history, focusing the greed and lust of power, uses of religions for disgusting purposes and billions of innocent victims, always and everywhere. The song Unexpected Fate is the chapter 2 of this personal but realistic vision. My lyrics are totally different from Venom, but only few fans noticed it.

Is it correct that The Final Separation’s cover simply exploited a photoshoot of an year earlier, without permission of the band?

Probably when Roadrunner received the master, they were disappointed for the production and used that picture for selling more records.

Why did the label also refuse to insert lyrics in the booklet?

Probably they did not want fans to realize that our lyrics were totally different from Venom. When finally my lyrics were released with IX album, I had been persecuted like a heretic in Germany and UK. The „metal elite” showed to have the same mentality of Christian medieval inquisition.

Did this release help the band getting included on bigger bills as far as shows go?

Not at all. Moreover I could get my passport finally after the release of Neurodeliri.

Were there any tours/gigs in support of the record?

Only few gigs in Italy. Nothing else was possible.

Did Bulldozer have everything it takes to become a cult band in some circles?

Bulldozer became a cult band in Scandinavia, thanks to Mayhem and Fenriz. Over there we had been sincerely respected. Of course in Poland (and some Eastern European countries), where we had better respect than anywhere else and in Japan (only underground scene, lots of bands covered our songs). Recently we toured Latin America with great feedback. But overall we are still just a cult band for limited fans.

A. C. thank you for the answers! What are your closing words for our readers?

Wish you all the best! I’m almost 60. I don’t know about my future. Maybe a solist project. 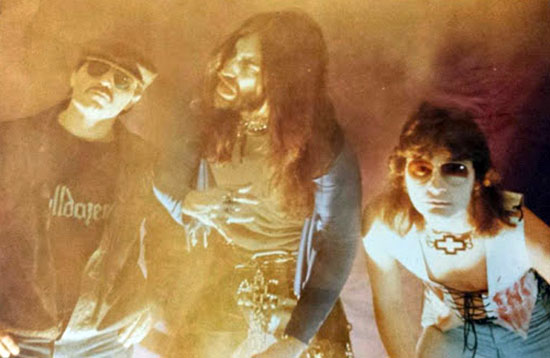