Bay Area is one of the most influential scenes considering the heavy metal scene as a whole. It became the hotbed of the technical, melodic thrash metal, the home of bands such as Exodus, Vio-lence, Testament, Possessed, Death Angel, Forbidden, Heathen etc. The scene started around the late 70’s/early 80’s, bands such as Anvil Chorus, Murder, Metal Church, Control were formed around those times and they opened the doors for the other outfits. In this interview, guitarist Chip Wagner told us about Control.

Chip, do you still remember at which point you started showing an interest in music and in hard rock/heavy metal particularly?

In 1972, when I heard Highway Star from the Deep Purple Made in Japan album. It blew my mind.

What were your very first faves to start with?

How did you end up becoming a musician? When did you first start learning to play an instrument and which instrument was it?

My first instrument was the bass guitar at 13 years old. I did not play the 6-string until I was 21.

Were you self-taught or did you regularly take lessons?

Self-taught, I took about 5 guitar lessons when I was 23.

When did you decide to be part of a band? 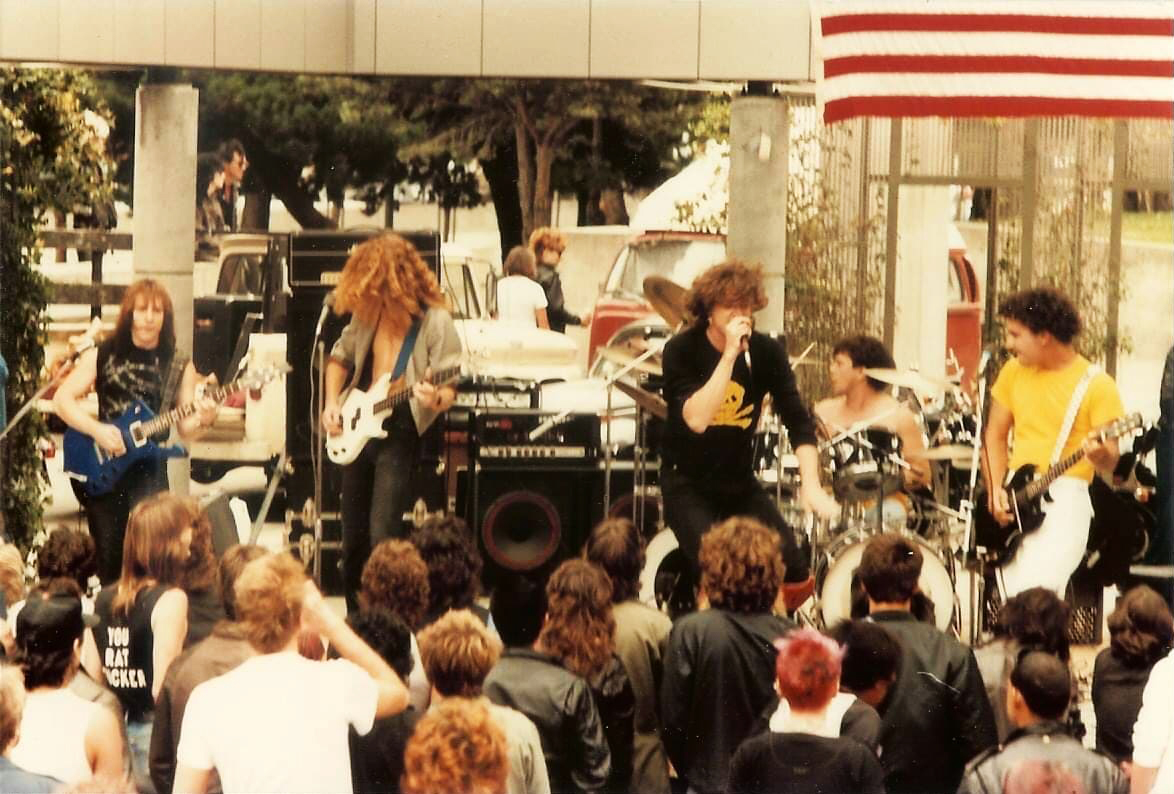 In your opinion, did several early outfits of the Bay Area scene borrow heavily from the N.W.O.B.H.M. metal and early punk rock?

Do you think that the Bay Area thrash scene might not have had the media attention L.A.’s glam scene received?

It really was a true underground movement.

Would you say that Rampage Radio, which was conceived by KUSF DJs Ron Quintana, Ian Kallen and Howie Klein, and has been assaulting the airwaves with metal on a weekly basis ever since its official birth on Sunday, March 6th, 1982, played also an important role in the Bay Area scene?

Do you recall one of the very first fanzines, Metal Mania, that was done also by Ron Quintana?

He was a kind of catalyzer of the Bay Area scene as well, wasn’t he?

Again, he played the most vital role in my opinion.

There was another fanzine, called Whiplash, created by Sam Kress (R.I.P.) and Brian „Umlaut” Lew. Do you have any memories about it? 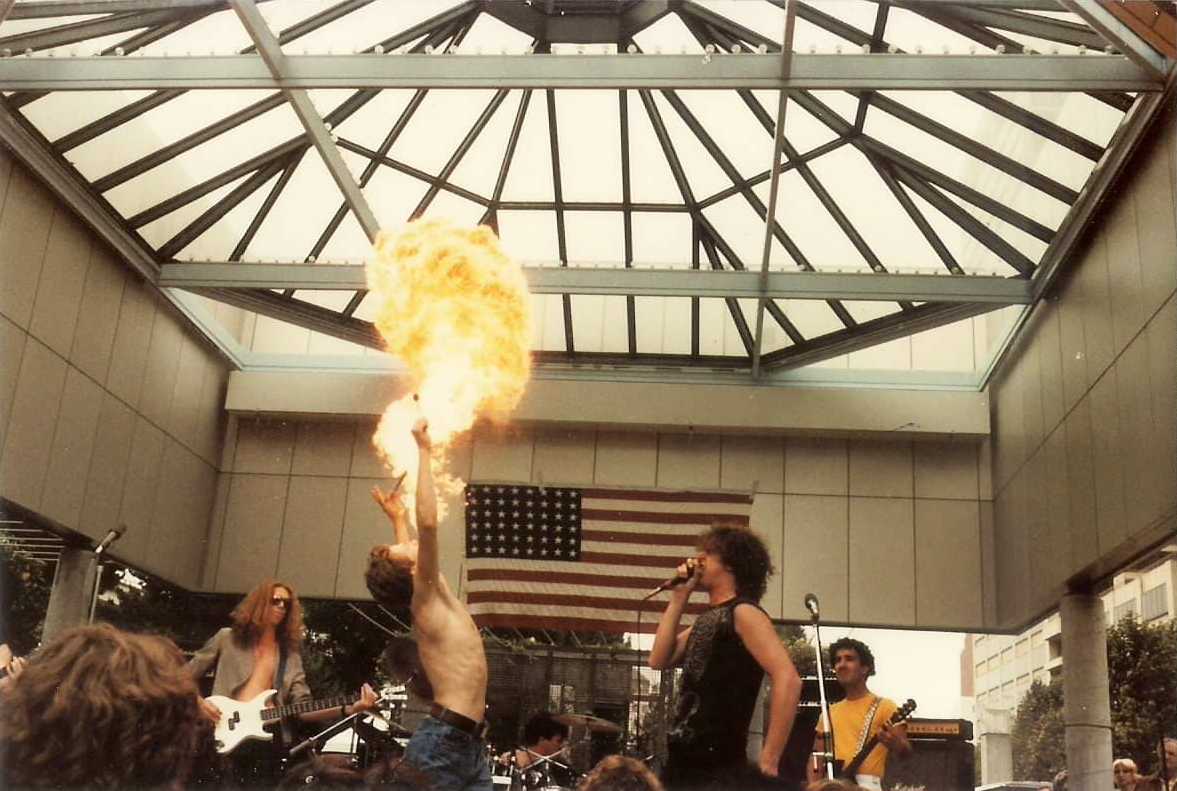 What can you tell us about the club scene? What were the first clubs that started opening their doors for hard rock/heavy metal?

I heard about the club scene as early as high school, especially the Mabuhay Gardens. I graduated early from high school and immediately got a job as a bus boy/dishwasher at Mab. I eventually became Front of House engineer at the Mab due to my work ethic obsereved by Dirk Dirksen.

How do you think that Metallica’s move to the Bay Area was an important step? In your opinion, were they the fastest, rawest and most brutal band at this point?

They were certainly the most different sounding band around in my opinion, lots of time-signature changes, very intricate.

Was it in the air that a huge metal explosion would occur later on?

Yes indeed, especially with the N.W.O.B.H.M. on the horizon.

You mentioned to me that you played on the second demo of Control. Was it an established band when you joined ’em? What was the band’s line up at this point?

Do you still remember how you were recruited? Were you the first choice or did they audition other musicians well?

I don’t think they auditioned. I practiced my guitar in the studio next door to theirs and Eric, their drummer, suggested I try out for the band. I am an audio engineer and had been doing their sound at several gigs prior to joining the band.

Were you familiar with their first material, by the way?

Yes, they practiced right next door to me and I did sound for them. I overdubbed a guitar solo on their first demo on the song, The Trap Is Set.

In the early/mid 80’s more and more bands started popping up in the Bay Area such as Mordred, Ruffians, Death Angel, Trauma, Laaz Rockit, Warning, Ulysses Siren, Havoc etc. What were your views on the scene at this point?

The scene was very active with a lot of new bands coming on.

When did you start to work on the second demo? How long did it take you to come up with newer songs?

April or May of 1984. Our songwriting did not take long, just a few practice sessions each. The recording of that second demo took 2 weeks maybe.

What do you recall of the recording sessions?

There was no money spent on the recording. The tape we had was previously recorded on and we used borrowed microphones from other bands there at Turk Street Studios. I am unhappy with the quality of the recording.

Can you give us any details regarding this demo?

It was done on 4-track 1/4″ tape. Pretty simple and straightforward. We doubled the rhythm guitars on a few parts. No real tricks in the mixing.

Was it a better representation of the band?

Some folks liked this incarnation the best, but in my opinion, Mach III with Doug Piercy and Thaen Rasmussen had more advanced guitar work and recording production expertise.

Was this demo spread around in the tapetrading scene or to attract labels’ interests?

We only made about 150 cassette tapes and handed them out to whoever was interested.

Did you manage to make a name for the band to get fans and stuff with the demo?

Yes, the demo helped and we got airplay on KUSF and once on the major rock station in the area on a show hosted by Howie Klein of 415 Records.

How were the demos received by the fans?

They went nuts over them.

Did you play a lot of gigs with Control? Were you mostly an opening act for bigger bands or did you perhaps played as headliners as well?

We tried to play only on Friday or Saturday nights opening up for bigger bands. I did about 8 gigs with them in 1984. We supported Metallica at the Mabuhay Gardend on July 20, 1984 and broke the record for attendance revenues at that night club. The record still stands.

Why and when did you quit Control? Were you perhaps involved in any other outfits after you left the band?

I quit Control on Jan 1st, 1985. It was a mutual decision between Ed Bull and myself. Music became a hobby for me after that.

In the mid 80’s there was a kind of thrash metal boom in the Bay Area. More and more newer outfits appeared on the scene such as Forbidden Evil/Forbidden, Heathen, Death Penalty (later known as Vio-lence), Defiance, Redrum, Sentinel Beast, Führer, Mercenary, Desecration, Epidemic, Sacrilege B. C., Betrayel, Sadus etc. What did you think of this movement? Were they the second generation of thrash metal?

After I quit Control, I left the scene, got married and had a kid. I got into property management and moonlighted as an audio engineer and stage tech, so I lost touch for a while.

A lot of musicians crossed their paths since they played in several groups, correct?

Yes, as a matter of fact, Control Mach III’s Just Another Killing had 3 members from the band Anvil Chorus, who also practiced at Turk Street Studios. 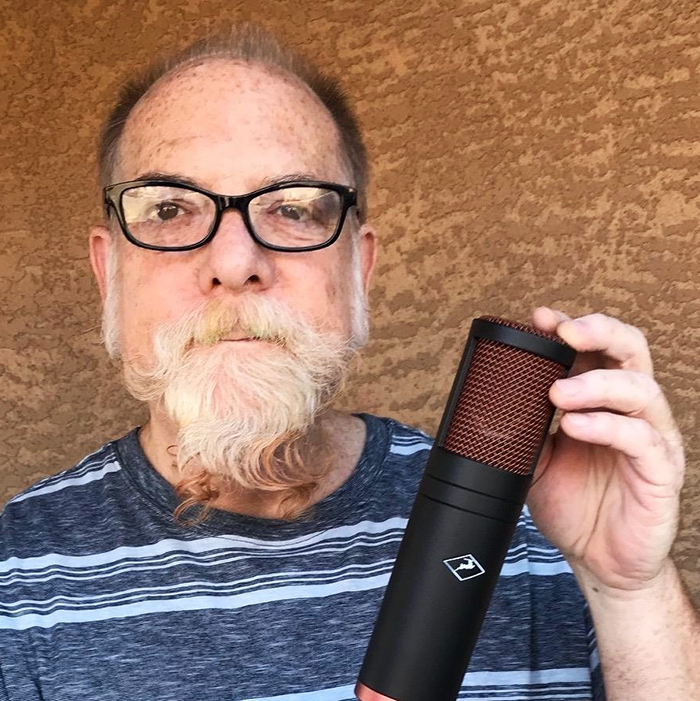 In your opinion, was a kind of rivalry between the bands?

Not that I noticed.

Compared to the New York or Los Angeles based thrash bands, the Bay Area ones were more melodic, technical, had a tight rhythm section, catchy riffs, killer solos and often sing along choruses. Do you agree with it?

Were the Bay Area bands easily distinguishable from each other in terms of songwriting, producing, sound etc.? Did all of them have an own/unique music, style, sound etc.?

I’d say many of the bands had something all their own. Some sounded the same and did not stand out.

During the past years, a lot of Bay Area musicians passed away such as Cliff Burton, Jon Torres, Sam Kress, Jim Larin, Kevin Mahoney, Mike „Yaz” Jastremski, Bob Yost, Randy Laird, Aaron Zimpel, William „Bill” Skinner etc. How do you feel about it?

Aaron Zimpel and William Skinner were my friends, so I was particularly saddened by their passing.

Who are/were your best friends from the Bay Area scene?

Bill Tudor, who was on the first Control demo ended up being one of my very best friends and we still are so even today. Carol Dauley, who did sound at The Stone for a few years is a dear friend as well. I’m still friends with many musicians who rehearsed at Turk Street Studios.

Do you still keep an eye on what’s going on in the metal scene? How do you view the scene these days compared to the glorious 80’s?

I do somewhat. I am impressed with how things have evolved, especially with recording production becoming digital and guitar playing becoming so advanced.

Chip, thanks a lot for the interview! What are your closing words?

Thank you, I consider it a great honor to be asked to contribute to your project and I highly recommend getting in touch with Bill Tudor, Dino Scopazzi, Michael Singer, Ed Bull, Thaen Rasmussen, Eric Rasmussen, Doug Piercy and Joe Bennet, all members of Control. Their input can round-out the information about the most fun and successful band I have ever been a part of, Control. If you can get in touch with Howie Klein of 415 Records and Mike Varney of Shrapnel records, they might remember us and have some input also. All the best and please let me read your publication when you have completed your research.