Tobias Karlsson about the story of Eructation

With the emergence of Nihilist, Carnage, Morbid, Mefisto, Obscurity, Grave etc. a new musical wave called Swedish Death Metal was born. The center of this movement was Stockholm, but later on a lot of bands started popping up from every part of Sweden. The scene became oversaturated very soon and a lot of bands managed doing only a couple of demos, rehearsals and then they faded into obscurity. One of them were Alafors (Västra Götaland) based Eructation that recorded only one demo, back in 1992. Four years ago Memento Mori Records released a compilation with all of the materials that the band have written and bassist Tobias Karlsson told us the entire story of the band.

Tobias, how do you view, that unlike American Death Metal groups, the first Swedish bands were rooted in hardcore punk?

I think it’s a kind of natural evolution. However, since we were based in Gothenburg, the talk was mainly about the evolution of the melodic “Gothenburg sound”.

Do you agree with, the first wave of Swedish Death Metal consisted of bands such as Obscurity, Mefisto (previously known as Torment), Carnage, Morbid and Nihilist who fragmented later into Entombed, Dismember and Unleashed?

For sure some of these bands have to be included as a first wave.

Many of these bands used the trademark Tomas Skogsberg/Sunlight Studios „buzzsaw” guitar tone, that was created by using detuned electric guitars (usually C# standard or lower), a maxed out Boss HM-2 Heavy Metal pedal, sometimes in combination with a single guitar through a Boss DS-1 Distortion pedal and the originator of this guitar sound was Nihilist guitarist Leif „Leffe” Cuzner (R.I.P.), correct?

This question is more technical than I could answer unfortunately. But that was a trademark sound of many bands of this time.

Was Bathory (Quorthon – R.I.P.) a pivotal group in Swedish extreme metal as well?

Yes. But I feel that Bathory or Quorthorn didn’t get the recognition he deserved at the time. My first album that I got was Under the Sign of the Black Mark, and it’s still one of my “go-to” albums.

Eructation was formed in 1990 by Tobias Sannerstig on the drums, Daniel Olson on bass, Mattias Stenborg on guitars/vocals and Anders Melander on guitars. Was it the line up right from the start or did you go thru any line up changes?

That was the initial line-up. But the „creative core” was always Tobias on drums and Mattias on guitars/vocals.

Was it the first really group for all of you or did you have any experiences prior to Eructation?

All members had some prior bands growing up. Most of them more rock/hardrock genres.

Did you know each other earlier, by the way? Were you good friends?

Tobias, Mattias, Daniel and Anders ended up going to the same school when they started the band. At the time we all had rehearsal rooms at our schools, which we could book and use on afternoons and evenings.

You came from Alafors, Västra Götaland; how was the underground scene in your town as a whole?

The whole area surrounding Gothenburg, and Sweden for that matter, had many oportunities for bands to come together. At this time in Sweden there were rehearsal rooms with some instruments available in many villages/towns, for young people to try and grow their creativity. So many bands started out from these rehearsal rooms during this time.

What about your rehearsals? Did you start writing originals or were you jamming mostly on covers?

At a start, mostly jamming covers: Slayer, early Metallica. But it wasn’t long before the own material started to evolve.

At which point and why did Daniel Olson leave the band?

Daniel wasn’t the kind of person who enjoyed being on stage, in the „spotlight”. He did choose to leave himself.

How were you recruited? Were you the first choice or did they audition other members as well?

I think I was the first choice. I went to the same school as the other guys in the band, and I played in another Thrash Metal band. So they knew about me, and when Daniel said he wanted to leave, they asked me.

What about your musical background and influences?

At the time I was playing in a Thrash Metal band together with my older brother. I also had a hardcore/punk band with all lyrics in Swedish. I’ve always had a diverse and broad listening. But the main influential bands were Grotesque/At the Gates, Morbid Angel, Sepultura, Pantera, Terrorizer, and swedish punk bands. My influences didn’t show so much in Eructation, since Mattias and Tobias Sannerstig were the creative core for Eructation. And they were great at it.

In 1992 you recorded a demo (recorded and mixed at by Sonny Wadstedt, Studiojedet, Surte); what do you recall of the recording sessions?

Time pressure and Tobias taking up way to much time for drums. I think we consumed as much time for drums as the all the other instruments and vocals together. It was fun for sure, at last getting the first tracks on tape. Sonny didn’t have much experience of Death Metal, but he did great. 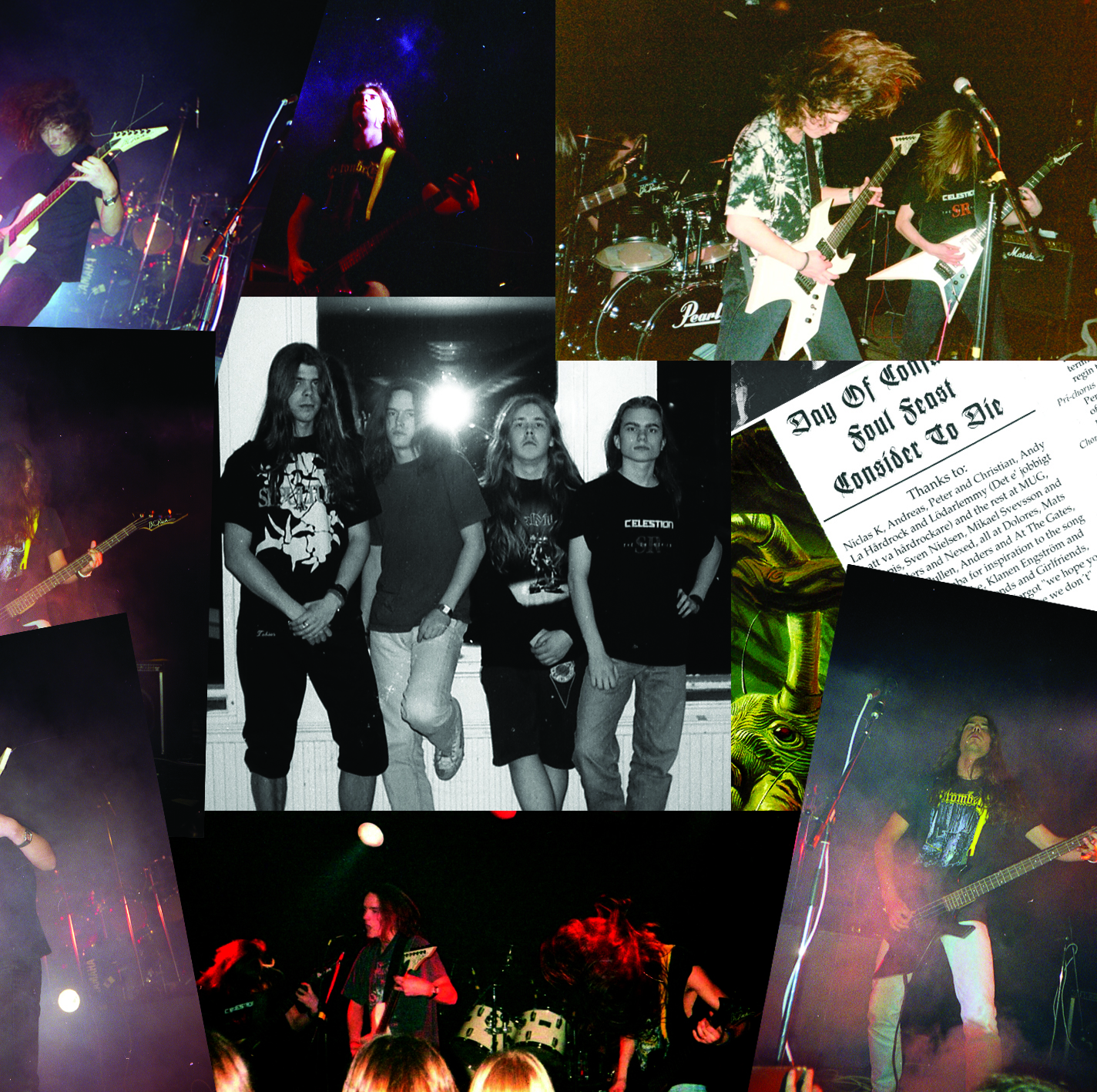 How much time did you have to complete the demo?

Who financed the costs? Did you pay everything from your own pockets?

We did pay everything from our own pockets. And for some reason someone took the decision to make a color sleeve, to add some extra cost.

Can you tell us every details about the demo?

It was the best three songs we had at the time. Time we booked in the studio didn’t allow for more tracks to be recorded. And we did feel that the songs would have been something we would listen to ourselves. And were positive to how people would react to it.

Do you think that it doesn’t fall into either the Gothenburg style melodic Death Metal or the Stockholm style old school Death Metal; instead, it sits on its own as an anomalous piece of Swedish music being a little bit progressive?

Yes. I wouldn’t say that we were totally unique, one of a kind band. But we didn’t fall into the typical Gothenburg sound or Stockholm style Death Metal.

Even though the songs mainly focus on a straightforward Death Metal format sometimes they go out of their comfort zone, a good example of this would be the melancholic outro on Day of Confusion…

Those parts are Mattias creativity totally taking over during the studio session.

There a lot of tempo changes, catchy riffs, the bass is audible; did you place a serious emphasis on the diversity?

Again, that’s Mattias and Tobias combined creativity in a nutshell. And I know that Mattias can still produce these kind of riffs, unfortunately not in a band. I met up with him a couple of times at the time when Raul approached us to release the compilation on Memento Mori, and he did play a couple of new ideas for songs. Still the same intensive catchy riffs.

Were all of you satisfied with the end result?

We were all thrilled with the result. 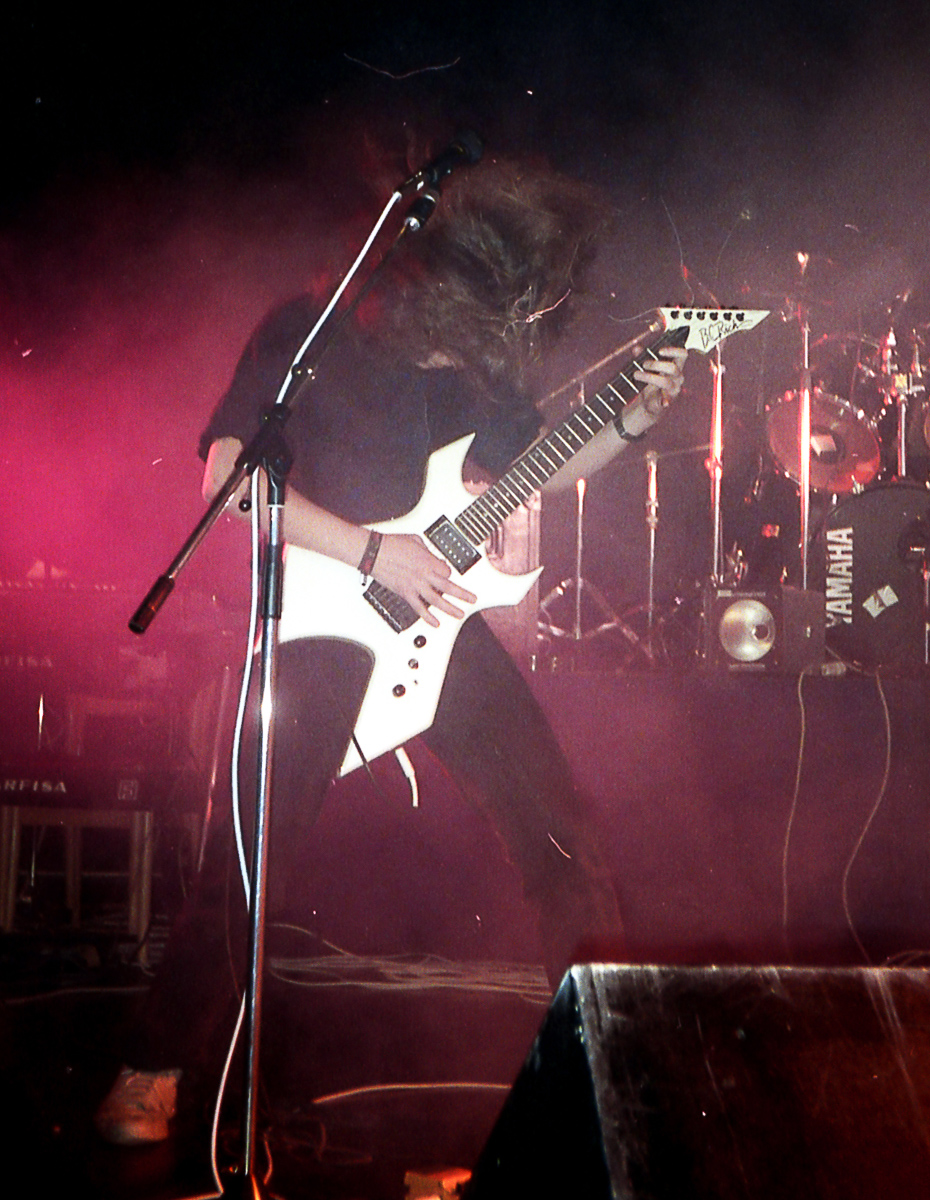 Was the demo spread around in the underground scene? Did you try to make a name for the band, to draw the fans’ attention?

We brought that demo everywhere. Sold at the local record stores. And ’zines all over the world. We shipped it all over the world. I know Tobias and Mattias got all kind of currencies mailed to them for the cost of the demo plus shipping. We did two “pressings”.

The demo was dedicated to Hakan Karlsson…

My father had passed recently when we recorded the demo, and the other guys thought it would be a nice gesture to dedicate it to my father. Really appreciated that.

According to the book Swedish Death Metal by Daniel Ekeroth, you had another demo in 1993. Is it the late 1993 recording session that meant to be out in 1994 as an EP?

We did record a couple of songs in about that time. The idea was to release it as an EP or split on a local record label in Gothenburg.

What were the reasons that these materials never saw the light? If there weren’t any labels’ interests in the band, didn’t you think to release the material as a self-financed one?

I remember Tobias talking to the guy who ran the label and I actually don’t recall the exactly the reason. But I think they had money issues. And we had already paid for this recording as well from our own pockets.

Would you say that the Death Metal scene was oversaturated and winded around those times?

Yes, I think you have a point there, to some degree. Everyone wanted to release the next big band. But there were a lot of good bands out there.

What did the cause the band’s break in 1997? What did all of you do after Eructation’s demise?

Four years ago Memento Mori Records released a compilation The Fumes of Putrefaction. What’s the history behind this stuff?

That compilation is all Raul’s making. He did search all paths and ways he could imagine until he found me. And I’m the only one that has changed my last name, so I should maybe be the hardest to track down. But through old friends and mutual connections he did. Awesome job. He really were dedicated to at least get to ask the question to be able to release the record. And we are so glad he did. And very thankful to him. 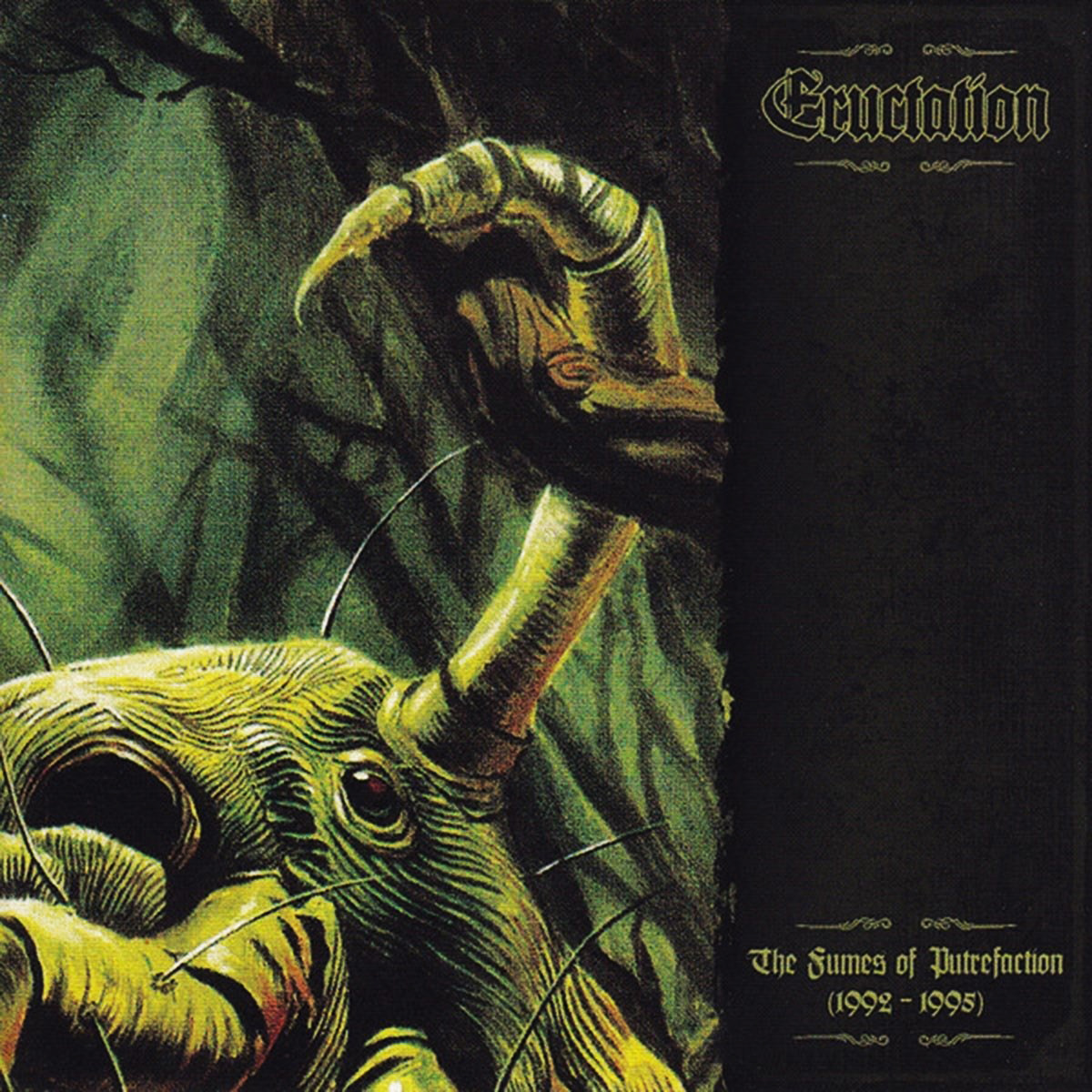 Were all of you guys involved in the project?

In one way or another all but Anders did take part in the project.

I had the honor to write the linernotes. The other guys had full trust in me, and they also had their chance to review it before I sent it to Raul/Memento Mori. Ola, another great guy. He helped Raul and us to re-use the demo artwork and refine it for the CD.

Is it a good chance for the fans to discover the band?

The best chance to discover the band today would probably be on Spotify or other streaming platforms where we put the songs a while back.

How do you view, that the history of underground Death Metal is crammed with bands that never got to make it past the demo stage, however, only a handful of them actually deserved much better in terms of both longevity and recognition; such was the case with Eructation?

It is what it is. There will always be a lot of bands that never get to see the attention deserved. I’m really glad to hear people mentioning Eructation in that way. So thank you and thanks to all people out there listening and still spreading the word about the small band from Alafors Gothenburg called Eructation. I think that in our case, one of the reasons were just that we didn’t sound Swedish or like the Gothenburg sound bands. So we didn’t fit in to what labels searched for in a Swedish band.

Do you still follow what’s going on in the underground scene these days?

It’s both harder to do so, but at the same time easier. I’m missing the fact that going to local record stores and find demo tapes and finding new bands. At the same time, with internet and all the platforms available, the possibilities are endless. I try to dig into the scene and all great bands. But as an older guy now, I tend to roll back and relax with the Under the Sign of the Black Mark album.

Tobias, thank you for your answers! What are your closing words?

Thank you David for bringing us to attention. And for keeping the scene alive. 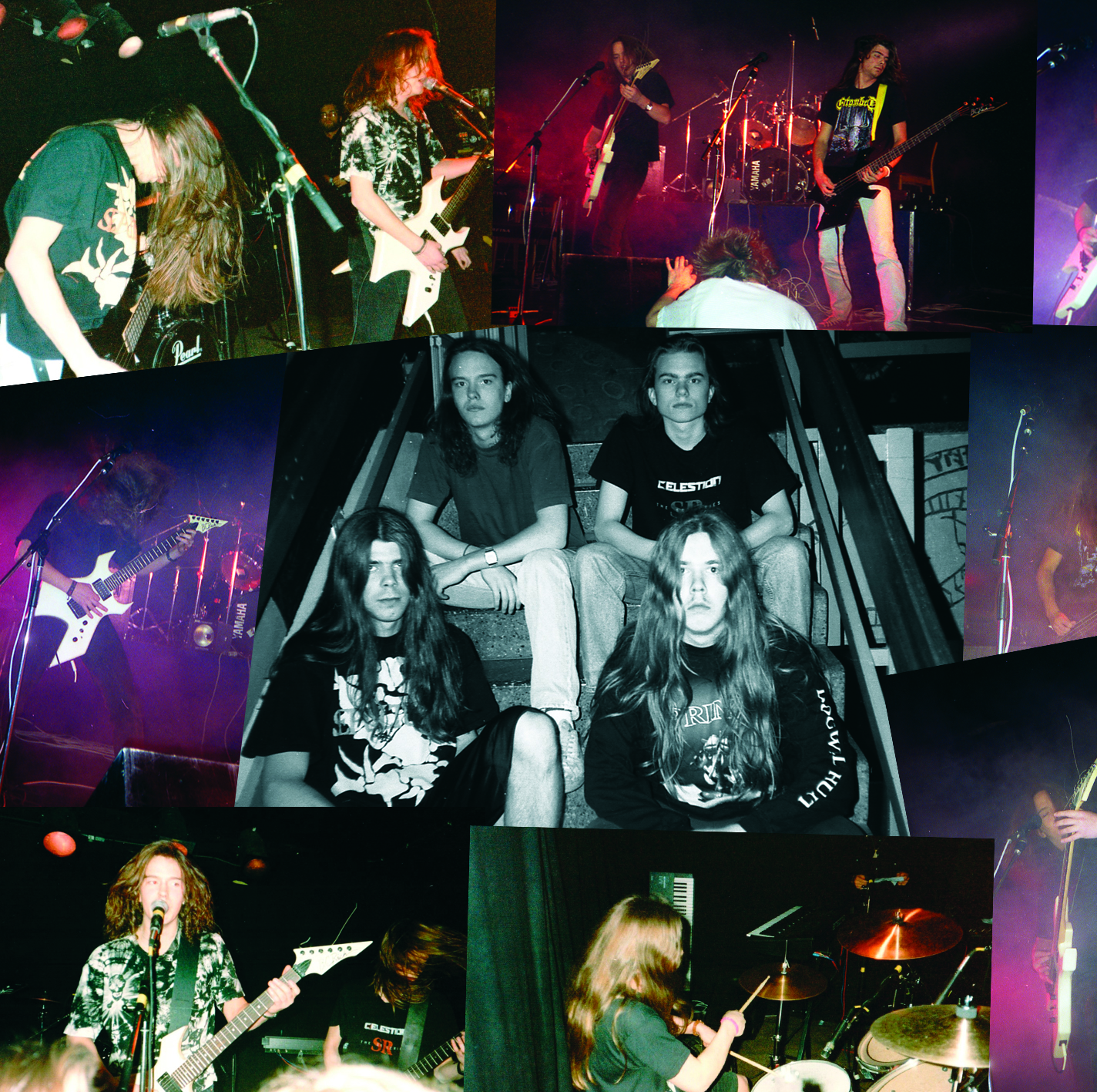