Paul Speckmann’s name doesn’t need any introduction. In this interview he speaks about one of his bands, Abomination’s first full length record, that was released 30 years ago.

Paul, before I ask you about Abomination, being based in Chicago, do you think that Trouble and Zoetrope were the first original heavy metal bands who were actually really heavy and not hard rock?

This hard to say because although I followed the bands in the beginning like everyone else, the notoriety of the two really became evident after the Metal Massacre 4 was released which also included Witchslayer, War Cry and Thrust which were also booming on the scene by this time!

Were they the first to maybe define a sound of heaviness in the scene and maybe everyone kind of took that sound a little?

Not in my opinion. I would say they helped shaped their own future of course early on, but there were many other bands evolving by this time in the Chicagoland area.

They (Zoetrope and Trouble) were the earliest bands that brought everyone together, weren’t they?

Both of them were influential…

The Thirsty Whale connection was certainly there, so I guess you could call this the first wave! Many of the bands supported one another during this time period before some bands got signed and jealousy prevailed, but this was later on! We would meet up for drinks nearly every weekend, was really quite the scene I would say. We had a blast in those early days!

All the bands were influenced by early Heavy Metal, some more pop than others, etc. Many of bands were paying homage to the Glam scene as well! There was quite a mix to be honest, at least in my opinion!

On the Metal Massacre IV compilation appeared five Chicago bands (Trouble, Zoetrope, War Cry, Thrust and Witchslayer). In your opinion, did it help a lot to attract the fan’s attention to the Chicago based outfits?

Honestly only Trouble, Zoetrope and Thrust did anything after this release. Nothing came of the scene, the exact opposite really. I left War Cry after hearing Venom, Slayer and Motörhead repeatedly! Chicago never really gets credit for influencing the rest of the world with their excellent bands! Abomination was formed in 1987 by you on vocals/bass, Aaron Nickeas on drums and Mike Schafer on guitars. How did you get together?

Actually, the band was formed by Chaz Baker and Mike Paul and Nickeas respectively! I went to see the original lineup a few times and was interested in the drummer. Needless to say, late nights after the Funeral Bitch rehearsals in 1987, I would join Nickeas for these late-night rendezvous with Shafer as we began our own band. Aaron decided that the name Abomination was his and soon we became Abomination.

What was your goal that you wanted to achieve Abomination with?

Obviously, we were a crossover band with many different ingredients at play in the music. We were trying to succeed in bringing the band to the world’s stage and in the end, we had several opportunities to enjoy the fruits of our labor!

Was Master on hold or did the band break up at this point?

The band had broken up by this time for several years already. I was happy to get a second chance with Abomination.

How about the musical past of Mike and Aaron?

Mike was playing guitar in Impulse Manslaughter before we met up! 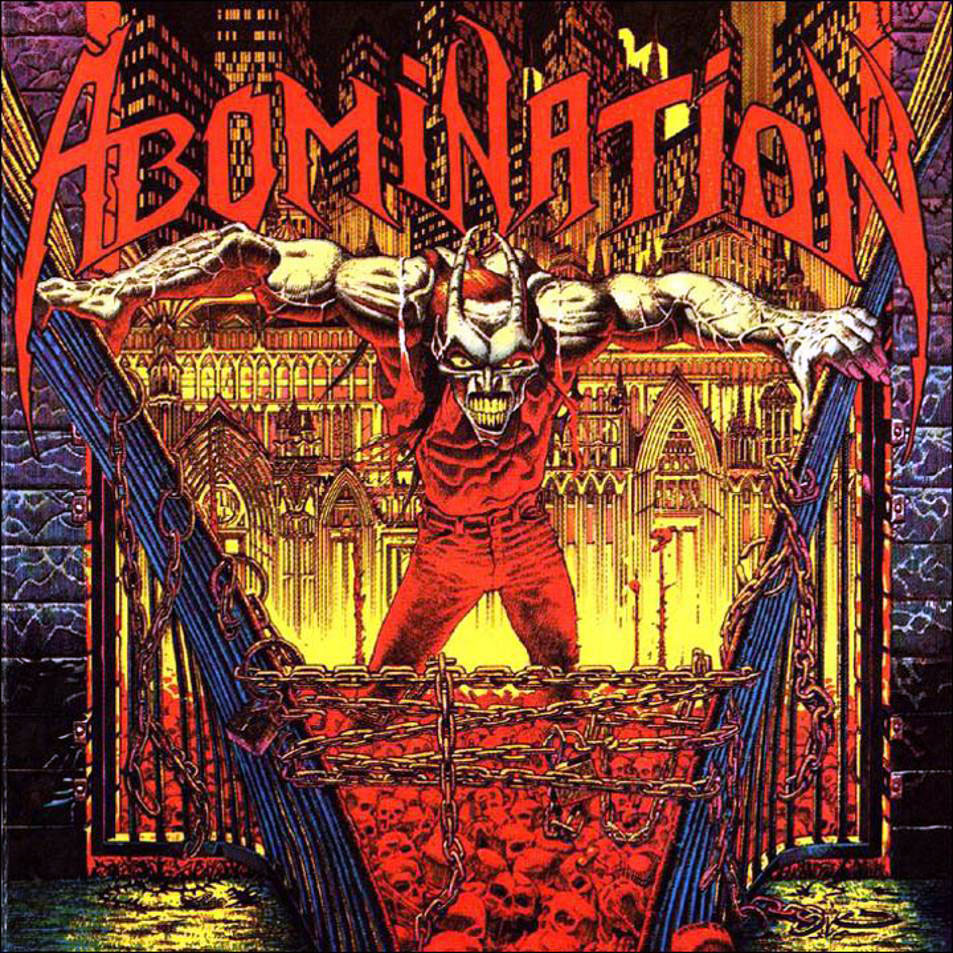 Not a lot to tell: Shafer came in with a few songs he had written and I wrote the rest. Mike sang his songs on the first demo, and I sang all the tracks I wrote. The only sad thing about the first demo was the crappy guitar sound. Shafer had no clue about sound at the time. Greg from Znowhite actually came to Seagrape Studios in Chicago to help me with the mixes, but said he could do nothing with the shit guitar sounds and left. After a falling out with Shafer over who knows what anymore, Aaron said he had a friend that was a killer player and this would prove to be true. I wrote all the tracks on the 2nd demo and we began rehearsals with Dean Chioles (R.I.P.) and proceeded to record again. This time the guitar sound was better, but still a bit rough.

Were these tapes heavily spread around in the scene?

The tapes were spread around the scene just as the Death Strike and Master demo were. Some of these early demos went on the influence a heavier genre of music later labelled as Death Metal!

Did you try to draw the fan’s attention to the band and to attract labels’ interests?

No, no one was interested in Abomination whatsoever until that fateful day at the woods. I had just finished working my moving job and my partner Mick said let’s go drink a few cold ones at the forest near where we worked. I cracked open an Old Style just as a few Harley’s pulled up. I smiled as I saw one of my high school rivals get off the bike with another fairly already well-known character from the band Righteous Pigs. I laughed as Ninos was speaking his usual nonsense to me and about me, when Joe Caper began burning Ninos and talking about my bands, Master, Death Strike and Abomination, mentioning that he had seen a few gigs and liked what he saw. As luck would have it, I just happened to have a copy of this latest red demo from Abomination in my pocket. Caper spoke of this new label called Nuclear Blast, and honestly, I didn’t hold my breath, because in this world talk is cheap. Well, the legend Joe Caper spoke the truth and a week or so later I received a letter and contract for Abomination from Slatko from Nuclear Blast Records. A week later another contract arrived for Master. 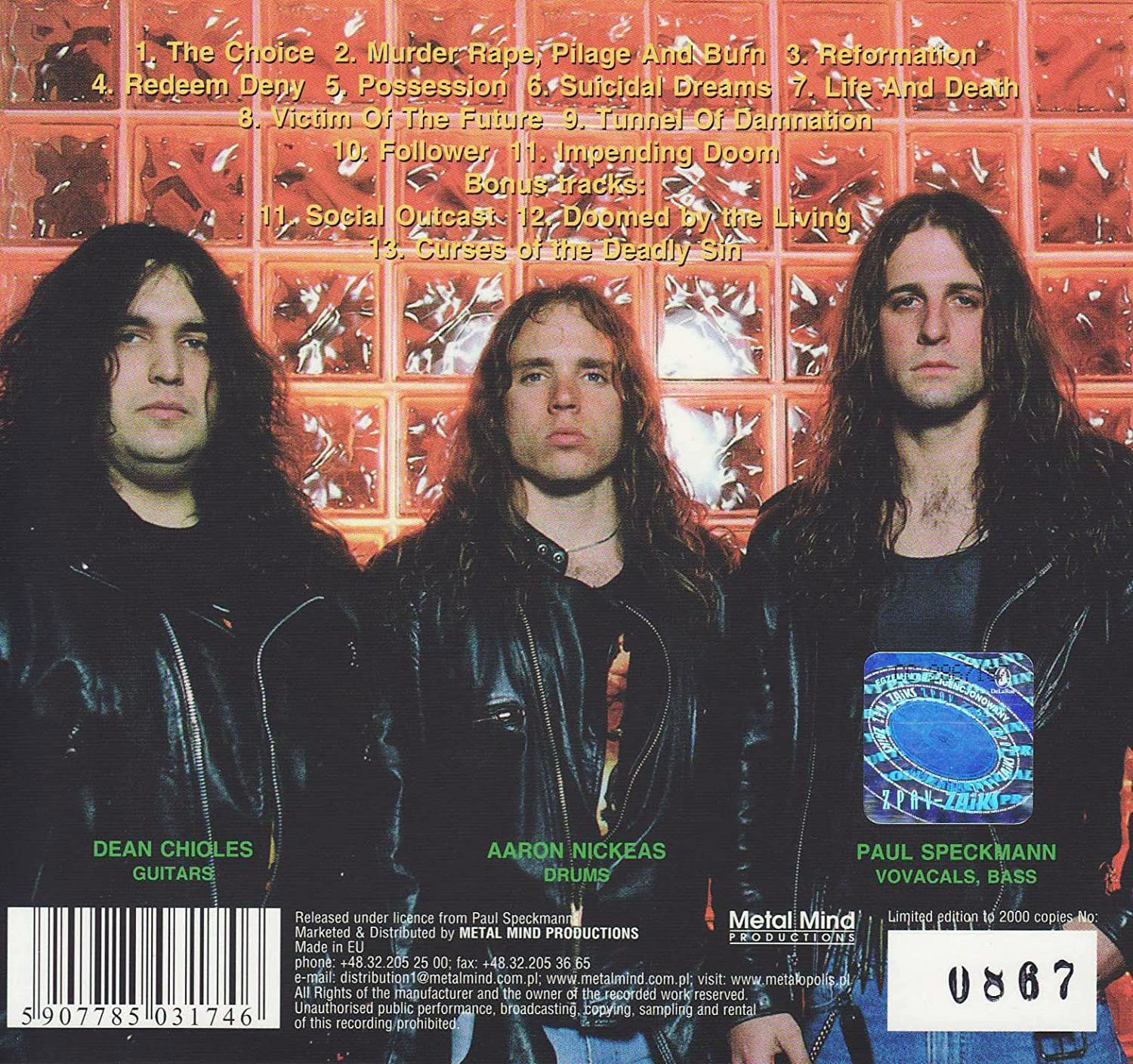 Did other record companies also show any interest in signing the band?

When did you start working on the debut album?

Obviously shortly after Chioles joined the fold we began to put together a repertoire for the first release!

Actually, in my opinion the recordings were pretty weak in the end, Bob Pucci was recruited by Chioles and Nickeas to mix and produce this first album at a commercial studio. After listening to these recordings of some commercial Heavy Metal bands Pucci produced, they convinced me that this was the way to go. This was actually the first time I recorded outside of Seagrape Studios in many years.

Do you agree with, where Master played a raw Death Metal influenced Thrash Metal, Abomination is more straight Thrash Metal?

Hmm, there was no Death Metal at the time?

Was it a conscious decision to diverge from Master’s musical direction?

YES, the idea was to forge a new direction with Abomination and I believe we succeeded.

Did you manage to do a more interesting, varied album compared to Master/Death Strike?

You’d have to ask the listeners. I personally sat at the helm and produced the 2nd album with Mike Konopka again at his Seagrape Studios, and this is by far the best representation of the band at least sound wise. There were some great songs on the first release but the sound was shit!

Is it a pretty raw and unpolished version of US Thrash Metal, played loud, raw and with a savage attitude?

Sure! We were never about nail polish!

This album was dedicated to the memory of Mr. Donald Robert Speckman. Was he your father?

Yes, my father and mother died during these periods of recording!

To support the record, you went on tour with Master and Pungent Stench. What do you recall of it? Can you tell us detailed about it?

This was a difficult tour in the middle of winter. Today in November it has yet to snow, but back then snow covered the ground. Chioles, Martinelli, Nickeas, Jim Daly and I had to snuggle up together to stay warm in these Volkswagen vans to keep warm. We had many adventures, trials and tribulations during this tour. The band split up after this adventure and we all went our separate ways for years. One thing I will always remember was driving around after the shows looking for vegetarian restaurants in the bitter cold to help the PS fellas to survive! This was difficult sometimes in the bitter cold because these special places didn’t exist as they do today. Man, times change! Thankfully in today’s day and age all these animal lovers can find their vegetables without worries!

Abomination seems to be active again. Any plans for the future?

Abomination was only active for a few decent paying gigs to keep the previous band members working, and of course to share some of the killer tracks with fans in Europe.