Last year we already had an Omen interview about the band’s first effort Battle Cry. This time guitarist Kenny Powell (again) shared his thoughts regarding the follow up Warning of Danger.

Kenny, almost one year after Battle Cry you released Warning of Danger, does it mean, that you were continuously writing new tunes or did you have any decumbent ideas, song drafts from the Battle Cry sessions?

No songs for left over from Battle Cry. We started writing new songs as soon as Battle Cry was finished.

A demo was recorded early 1985. What kind of goals did it serve? Were you perhaps asked by Metal Blade to do any pre-production material?

It was our idea to do the demo. The place we were rehearsing also had a 16 track studio and we just wanted to get a buzz going for the next record.

Did the new songs really represent what you wanted to achieve the new album with?

I think the songs were close to what we were trying to achieve, a little more technical, more diversity. I would have liked the sound to have been larger but overall, I think we were pretty satisfied. 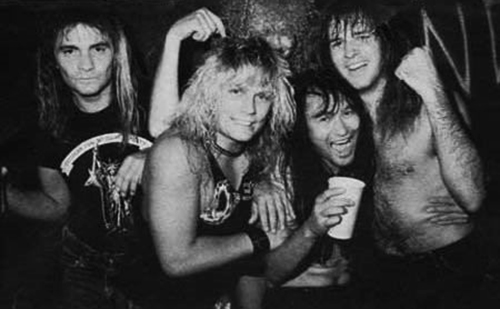 Did you change anything on the songwriting process/method compared to Battle Cry, by the way?

Battle Cry was a compilation of song ideas that we were working on before I joined Savage Grace, with the exception of Battle Cry, Die by the Blade which I had written for the S.G. album, Axe Man which was from J.D. Kimball’s previous band. Probably the only song that was not from previous ideas was In the Arena, which was written only a few days before we started recording. Warning of Danger was written more as a band, with ideas brought in and arrangements worked out during rehearsal times.

You entered the Eldorado and Track Record Studios. How did the recording sessions go? Were you prepared to record the material?

The recording went pretty smooth: 2 days at Eldorado for bass and drums plus some guitar, then maybe 6 or 7 nights at Track Records for guitars and vocals. I remember it being pretty tough because I was working all day as an auto mechanic then going to the studio all night and maybe getting home for a shower before going to work again.

How do you view, that whereas the previous album had a big NWOBHM influence, that’s pretty much taken out here, with more of a Metal Church influence in its place?

I think the NWOBHM influences might be overrated a bit. It came in mostly after I moved to LA. I had not heard much of it in Oklahoma, it turned out to be very similar to what I was already writing. I didn’t feel that WOD was influenced by other bands, not to say that you are always influenced by other music, even if it is on a subconscious level.

Is the album the same quality as your debut Battle Cry or did you manage to overshadow it?

I am not sure that we could overshadow Battle Cry. While it was a bit ragged, we were only together a few weeks before the recording and didn’t play live until it was released, it has an excitement to it that would be hard to match. I definitely think Warning showed we were maturing as a band and was more disciplined as songwriters.

In your opinion, does Warning of Danger showcase quite a bit of variety?

There was definitely more variety, probably more thought put into the arrangements. B.C. was more slam the gas pedal down and go! The similarities are that we had put together a line up that everyone complemented each other’s talents and we were building what I think was a unique sound, especially for an American band at that time.

By the way, where do you find the differences and the similarities between the two records? Did you perhaps step into a more aggressive, thrashier direction?

I think some of it was a little more of an aggressive slightly thrash sound, we were really just getting exposed to that for the first time. Omen was never intended to be a thrash band but I still like to play around with that sound, it is always fun and may go for a full out thrash song on the next record. 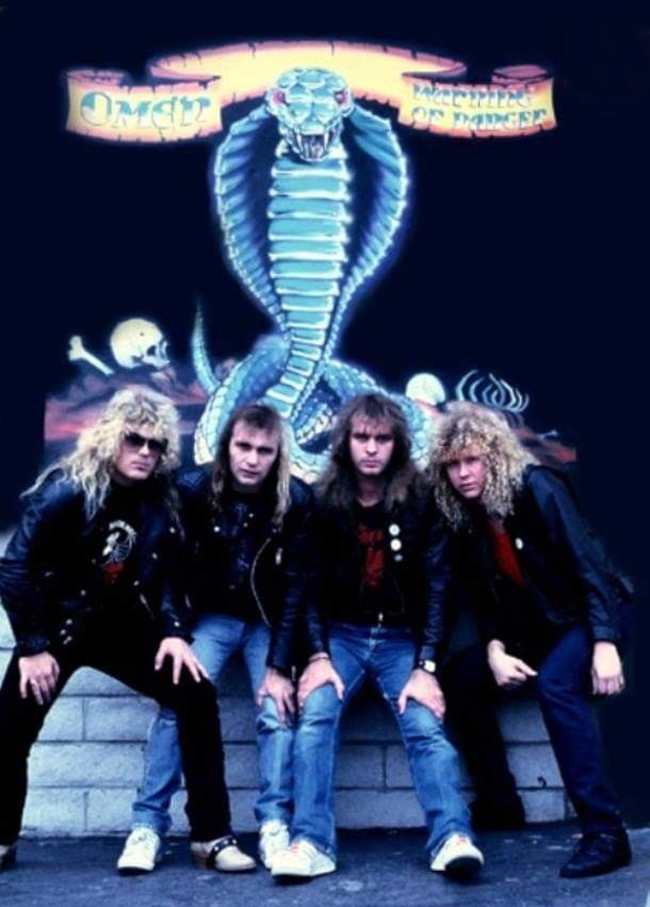 Would you say, that each track a thundering hymn with a soaring chorus and the songs here are easily distinguishable and much catchier than on the previous effort?

I don’t know if every song is a thundering hymn, that’s what we were going for on most of them. The choruses were definitely improved and more thought out and I guess that makes them a bit more catchy.

Do you agree with, that Omen were heavy, inspired, sometimes slightly melancholic and you had an own identity?

There was some melancholy elements in J.D., my stuff tends to a bit more aggressive. Having our own unique sound was something we worked hard at and were very proud of.

One of the greatest things about Omen is vocalist J.D. Kimball; along with Harry Conklin, David Wayne (R.I.P.), Carl Albert (R.I.P.) and Patrick Brown (Oblivion), Kimball was one of the strongest USPM singers of the 80’s. How do you explain this?

Finding J.D. was the final piece of the puzzle. The band would have been together much earlier but we could not find a unique singer and I didn’t want to sound like every other LA band. That’s why I spent time in Savage Grace while looking for the right singer. Ironically I found him in a garage band that Steve was jamming with. He said I should come to a rehearsal and hear him. I listened to about three songs and hired him on the spot. I knew he had a special and unique talent and his writing style was very similar to mine.

Is his vocal delivery here a bit more melodic than it was on Battle Cry?

His style was probably more melodic than he always got to do in Omen. I have to have melodic vocals, but with the right amount of aggression to keep it from being some pussy pop metal. For the most part it worked out well with a little give and take on both sides. I will tell you this, he has been damn near impossible to replace, current singer Nikos A. is as close as it gets and that’s taken 30 years to find!

What were the shows/tours in support of the record?

We probably did more shows in support of WOD than any other record during that time. It was only U.S. shows at that time, shows with Lizzie Borden, Metal Church, Slayer, Stryker some headline shows etc. Kind of fucked up that before this virus shit hit, we play more shows in a year than the original line up did all together.

Back it the day you released some great efforts, that became classics, the band has a cult following, but you never made it big. What was the reason of it?

I guess making it big is in the eye of the beholder. I was never one to play the ass kiss game, be told what to do, how to write songs or any of that shit. Would I have liked Omen to be bigger, Fuck Yes! We are still playing, making new music and have influenced thousands of younger bands and fans. That is making it big to me and doing it while keeping my integrity. I will take that any day.

How do you want J.D. Kimball to be remembered?

As one of the greatest singers of the metal genre and a true innovator. RIP. HOPE THE DAY IS COMING SOON THAT WE CAN ALL BE TOGETHER AS MEMBERS OF THE METAL FAMILY AGAIN, otherwise I will loose my sanity! Lol 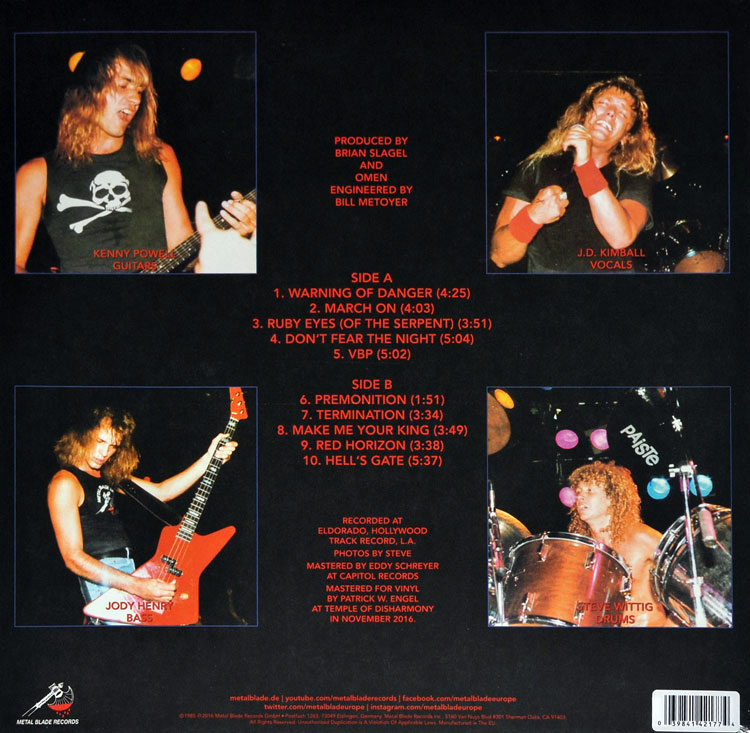