Farida Lemouchi has returned! However her new band Molassess is not the reincarnation of The Devil’s Blood, but a completely new story. Apropos of their debut album Through the Hollow (release date: 16th October) I asked Farida about formation of the band and their future plans.

The Devil’s Blood break up in 2013. Next year you lost your brother Selim (who you’ve played together in TDB for many years with). How could you survive this tragedy?

How does anyone survive losses in their life? I’m not different than everyone who suffers grief and loss and all kinds of terrible stuff that happens to you as you move through life…

Did you think about turning your back on the music industry after that?

I never turned my back on anything, but sometimes other things are more urgent. I actually did a lot of stuff in that time. I was always around…

Everything, that needs to be done. To much to sum up here, I was there for my mother, my son and my friends, and tried to keep my self alive… and in the meanwhile, as I mentioned before, did a lot of guest vocals for projects with befriended bands.

Did you keep in touch with your former bandmates during that time?

Yes of course, we always stayed very close. If you lived what we lived, you are eternally connected.

Whose idea was it to come together again and form a new band? Yours?

It was in the air, everyone had time on their hands all of a sudden. Making music again was something that was on all of our minds but it wasn’t clear in what way or form. Then Walter Hoeijmakers (founder and artistic director of Roadburn Festival) came and expressed that he felt it was time for something to happen again musically between all of us, as a commissioned piece, which we gladly accepted. This really triggered everything to move forward because now there was this dot on the horizon and it all started brewing. It was a special feeling how this all came together in synchronized fashion as if it was meant to be.

Why didn’t your ex-drummer Micha Haring join you?

He was very busy with other stuff and already in DOOL which took all his time and effort.

Why do you write Molassess with double ’s’ at its end? The dictionary version is ’molasses’ and Selim Lemouchi & His Enemies song that you chose your band name from has a single ’s’, too…

We spiced things up here and there.

When did you start to write the new songs? Which was the first one that you completed?

Ron van Herpen got approached first about the project, and had the first song already written before we started. I guess it was Mourning Haze, not long after that we started working on Through the Hollow which became the title track to our album.

What’s the difference between The Devil’s Blood and Molassess emotionally, conceptually and musically?

It’s a different beast all around, in that way it doesn’t make so much sense to compare it like that. Molassess works completely on its own terms. And it is impossible for us to tell the same story twice.

Has any occultism remained in the music from your previous period?

We all take with us the valuable lessons learned. With the will to take it further and further.

Molassess sounds to me more psychedelic than TDB. What do you think about it? What are the pillars of it: the lyrics or/and the more jazzy sound supported by keyboards?

I’m not sure, everyone has his own way of relating to the music, and The Devil’s Blood was also never a stagnant entity. Every album is different. Molassess tends to follow that, we will never be repetitive. Pulling some of that timeless ecstasy down with us.

How did the songwriting, rehearsals, recordings of the album go? Which stage of this process are you in now? Did you already finish mixing, mastering?

We tried to get the most direct translation of the spirit to come forward. A deep dive into an untold story that had to break loose. Recording with our trusted friend Pieter Kloos it felt like being home but within a new dimension. At this moment the record is being pressed.

What are the songs of Through the Hollow? Is it a concept album?

I think the songs and lyrics speak for themselves, everything is in there: everything from life to death and all that goes with it. It feels silly explaining them; art is a way to express inner feelings, thoughts, emotions and what not. Somethings you cannot grasp. What is that a concept album? If the definition is that there is a theme, then yes… not intentionally, just the way it turned out.

In your opinion, do you have any chance to tour with the album in The Netherlands or Europe? I’m sure you are welcome in Hungary, too…

If the state of the world allows us we will be touring across Europe on the album.

You mentioned in a previous interview that you – as Molassess – won’t play TDB songs. How many songs do you have besides the tracks of the EP and LP?

There is always new stuff in the works, but for now we have the EP and the album that together is easily over one and a half hour of music. Enough material to choose from.

Your debut album Through the Hollow will come out in October, after that you certainly will play some gigs… What do your next steps depend on?

We have a tour planned with Tribulation and Bolzer, and we are ready for anything (if it fits) really. In the meantime we are gonna focus on new material. The state of the world that it is in right now is unpredictable, so who knows…

Are you totally focused on Molassess at this moment or do you have other projects in front of you?

The main focus lies with Molassess, but everyone in the band is doing more music. 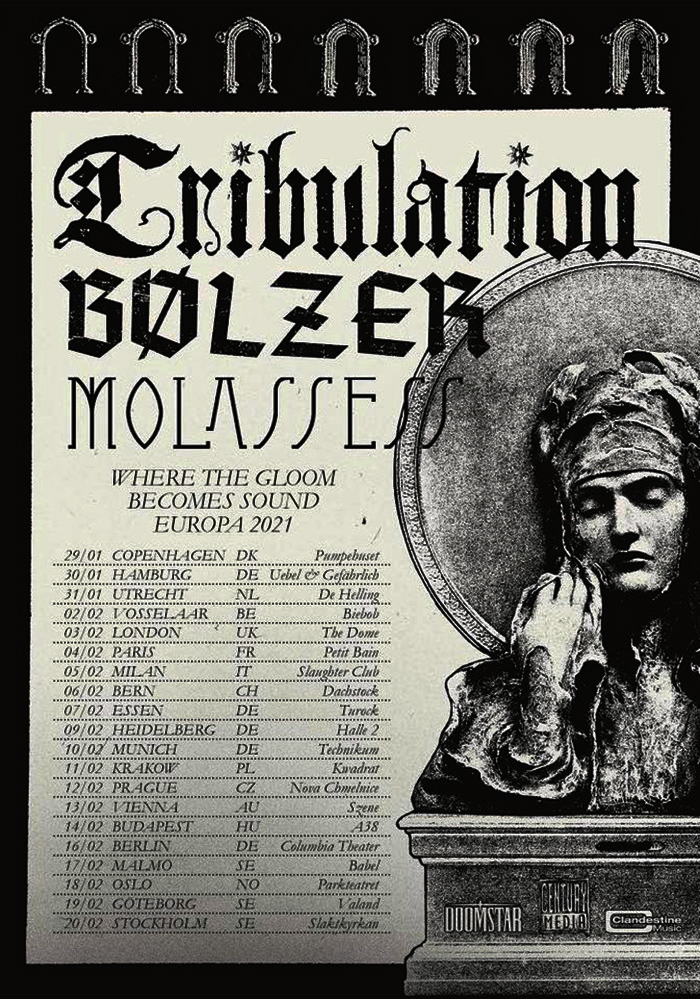