Dark Angel is one of the best and most influential Thrash Metal bands of all time, but in my opinion, they are a little bit underrated, they didn’t manage to become as big as the Big Four. A dream of mine came true, when former singer Don Doty agreed doing an interview with me.

Don, the band was formed as Shellshock in Downey in 1981 by you on vocals, Rob Yahn on bass, Jim Durkin on guitars and Mike Andrade on drums. Do you still remember how you got together?

Yes, we were all hanging out in the lunch area at Downey High School. Rob said he needed a ride home and I told him no problem I give you a ride in my car. I had a pretty good stereo system in my car. On the way home I was blasting Ozzy. I just happened to be singing along and Rob looked over and said: „You got a good voice. Jim and I have been working together on some music and starting a band. Do you want to sing?” I said sure, why not. So we got together and put together a couple of songs. Hammer Away, Demons Domain, Eternal Captivity, a few of them.

Was it the very first outfit for all of you or did you perhaps have any musical experiences prior to it?

At the time Jim was the only one taking lessons.

You started at the same time as Metallica, Slayer, Armored Saint, Savage Grace, Abattoir etc. What do you recall of that period?

It was a good time, we all went out and checked out other bands, and passed out a shit ton of flyers.

Was the underground scene in Los Angeles in its infancy at this point?

Yeah pretty much. There was a couple of record stores you could go in, they had like one section you could go through some albums/vinyls. That is where you would find bands like Motörhead and Tygers of Pan Tang; the Metal Massacre was always a good vinyl to get.

Did you have a clear vision what kind of musical path do you want to follow?

How about your early rehearsals? Did you start writing originals or were you jamming mostly on covers?

We did originals then when it was time to play a party, we would learn a copy or two of Judas Priest, Tank.

You were forced to change your name to Dark Angel, due to another band already using that name Shellshock. Who came up with this moniker?

Jim and I came up with it one day after school kicking back in his room.

Dark Angel were pretty active in their formative years, releasing no less than 4 demo tapes before releasing We Have Arrived. Could you tell us about those materials?

When we started, we knew what we wanted, we just weren’t sure how to get it and that’s what those first songs were about. We changed a lot when we played it. Sounded ok but it wasn’t what we were going for. Truth be said it was Jim who pushed it. He would write, then rewrite. And then we ended up with songs like Welcome to the Slaughterhouse.

Did they really represent what you wanted to achieve with Dark Angel?

In the end we had songs like Merciless Death.

At this early period of the band, you had some drummer changes. Is it correct, that Lee Rausch and Bob Gourley played on the drums before you settled with Jack Schwartz?

Yes, correct, both are good drummers, but things just didn’t pan out. 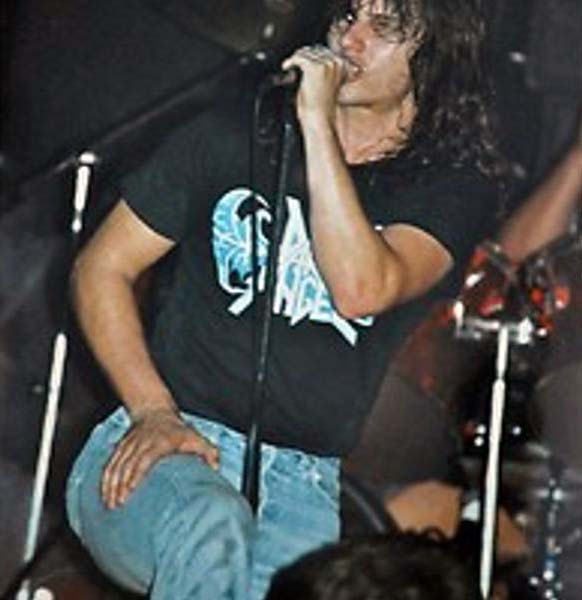 How and when did you recruit Eric Meyer as second guitarist?

Eric came in because we wanted a fuller sound when we were on stage. So Jim looked around in the paper and came up with Eric. The surfer dude. But he was into punk and metal and he could play, so we brought him in.

Do you still remember how you were picked up by Azra/Metal Storm Records? Weren’t bigger labels interested in the band?

Azra was the first to hit us up. So we jumped on it.

When did you start working on your debut album, that became We Have Arrived?

All we did was playing shows and adding songs to the playlist. Which pushed Jim to write more songs.

During August 1984, you entered Track Records; what about the recording sessions?

It was really cool well I had a good time, we all went in and gave it all we had.

Did you have a decent budget to record the material by the way?

No, of course not. We were there in the middle of the night, in the morning when nobody was around we got more time cheaper that way.

In your opinion, are the tracks less complicated than that of Slayer’s Hell Awaits? Are they clearly structured and can be taken in easily?

How would you explain, that you played a more old school, primitive form of Thrash which took heavy influence from traditional Heavy Metal?

I’m going to have to stay because bands like Kiss and Black Sabbath influenced us.

Is the end result a pretty standard, raw thrash metal of the eighties? Merciless Death is a classic, this is one of the ultimate Thrash anthems, correct?

Yeah I like Merciless Death, it’s one of my favorite.

References especially early Slayer, Metallica and Exodus are obvious and in that respect, Dark Angel isn’t the most original sounding act from those early days of Thrash, but they are still widely considered very influential. Do you agree with it?

How do you view the material after 35 years of its release?

Did the production give the record some distinctive character?

And without the help of Bill Metoyer, it wouldn’t have been all that it is.

Would you say that this debut should be held in the same light as Kill ’Em All, Show No Mercy, Fistful of Metal, Killing Is My Business…, and Bonded by Blood?

Is We Have Arrived the foundation of your career and a bit different from the following, violent Darkness Descends?

Well, when you’re moving on, things are going to change and we started with We Have Arrived and as we moved on, we turned into Darkness Descends that’s just progression we did. We wanted it harder, faster and stronger.

Welcome to the Slaughterhouse appeared on the Metal Massacre VI compilation; did it help a lot to make a name for the band?

At that time yes, We Have Arrived had been held up for so long.

The album came out around March 1985. What caused the delay?

The record company had issues.

Did Dark Angel leave its mark on the scene with We Have Arrived? Did the record stand the test of time?

I’m going to say yes. There’s a band out there still playing We Have Arrived and Merciless Death, so yeah it made its impact.

Don, thank you for your answers! What are your closing words for our readers?

I want to say thanks to you and to the fans out there. I am very proud to be part of the Metal movement. And that’s because we have the best and hardest fans in the world.