I think that this is the interview where I don’t need to write an introduction. The name Nasty Savage speaks for itself, they are one of my all time fave outfits along with Agent Steel, Possessed and Mercyful Fate and they have an excellent discography. Singer Ron „Nasty Ronnie” Galletti answered my questions.

Ron, the band was formed as Nightmare in 1981. What was the line up at this point? Is it correct, that you had a female vocalist during the Nightmare period?

Was it the first band for all of you, that you got involved in? How about your musical past as a whole?

I only jammed with a few guys in a band called Cronic Dogs but never did any gigs. Not sure about Nightmare.

Would you say that along with Siren and Avatar/Savatage, you were the forerunners of the whole Florida metal scene and you had a great influence on bands, that were popping up later on?

The bands I was inspired by was Argus and Vengence, then Avatar/Savatage.

Was it still in its infancy?

Yes, we were inspired by them or at least I was.

By the way, have you recorded any material as Nightmare? How did the band sound like?

Nightmare was a cover band, Ozzy, Black Sabbath, Van Halen stuff like that. I saw them play a party and thought they were cool. Ben had energy and I saw something there I guess. After that is when I heard they were looking for a singer frontman. A friend who knew them got them in touch with me. I went and tried out for them and I only knew Iron Maiden Wrathchild. We played it 2 or 3 times and I left. Not hearing back from them I saw them at a keg party a few weeks later. I said do you want me to be your singer or not? They said yes and I said I will be over Monday with a game plan. When I got there I said everyone out except the band they were like who is this guy?

What made you to change the moniker for Nasty Savage in 1983?

I said everyone out! I said sit down. The name of this band is Nasty Savage, I am Nasty Ronnie the wildest singer ever and we will save our money to record a demo tape with 4 songs called Wage of Mayhem within 1 year we will be signed to a record deal, getting fan mail from all over the world and we will be touring. The year was very early 1980s like 1982.

Who did your excellent logo?

The logo was created by Dizzy Beeson Curtis’ brother. 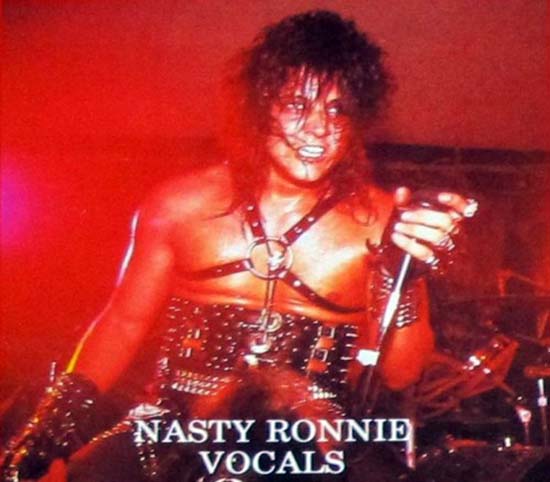 In 1984, you released both a rehearsal (Raw Mayhem) and a demo (Wage of Mayhem). Can you tell us any details regarding these materials?

We created quite a few songs, but before that Craig Huffman (R.I.P.) left the band and we picked up Curtis Beeson on drums and David Austin on guitar.

Did these recordings really represent what you wanted to achieve with the band?

The band rose to popularity primarily due to your over-the-top stage show performances (in early shows you smashed television sets over your head), right?

Yes, it was part of the plan to shock people and to get people’s attention asap but it was that natural mayhem in my blood as a performer because I really wasn’t a singer I just played one on stage, ha ha. We put Brandon Florida and Tampa Bay on the world Metal map. There was a Raging Desire that burned inside me it was a spiteful intent that made me wild so heavy I cant describe it yes I had it since I was a child…Savage Desire!

Does it mean, that you were gigging pretty often?

We created our shows in cow pastures and house parties everywhere passing out flyers, old school promotions and marketing.

All the bands back then would do anything to open up for us because it was always an event to see and I believed in helping and networking with other bands. Mantas was out with a demo by then and then changed to Death. Death would come to our shows before they had a band. They would come over from Orlando to our gigs. By Ruby’s we were already signed and they were about to really break out. Chuck (R.I.P.) was a kind gentle soul always, but turned into a brutal guitarist and singer power giant! That night at Ruby’s was just another gig that went down in Metal history. I loved those days, it was a new beginning of Death Metal that showed it wasn’t just Ca bands anymore and Death proved to be the world leader after that. It was always respectful how Chuck would give us props as an influence over the next few years and they grew massive. It was all good!

Yes, it was the marketing and non stop promo and press that made those deals happen. That was my goal, that was my job to market the brand, to promote and create a marketing machine for NS! 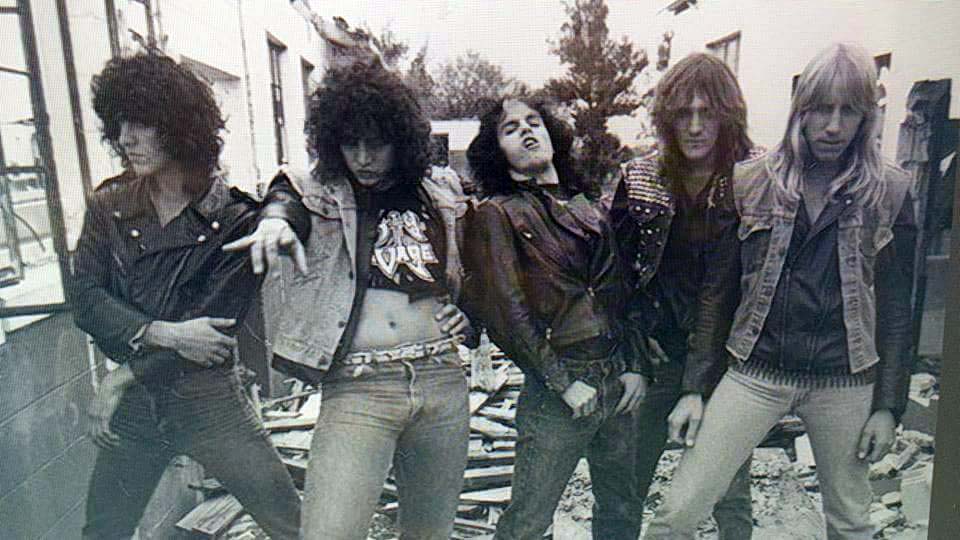 Were there other labels’ interest in Nasty Savage, by the way?

A few showed interest, but Metal Blade wanted us on MM #6 and follow up with our own LP after that, so our dream was coming true!

Did the Wage of Mayhem demo take the underground by storm in 1984?

I think so in certain ways, yes it did.

When did you start working on your debut album? How were the songs penned as a whole?

1984 we just kept writing songs. We had many songs ready but we picked the songs for the album and focused on playing them over and over getting ready to record. Ben, Dave, Fred created classic music and songs that have stood the test of time.

Were you prepared to record the material?

You entered the Morrisound Studios to cut the album. That was the first record that was done in that studio, wasn’t it?

Yes, we were one of the 1st bands to record there at Morrisound, after that many bands from around the world came there to record.

Was Scott Burns an experienced producer at that point?

Scott was an intern helper, when we were in there. He was a bright young man, who was always helpful and ready to work extra hours to get the project done. Jim Morris was his mentor and inspired him to live his dream and vision. Scott was a great dude.

Do you still remember how the recording sessions went?

David Austin was a master along with Fred really layed down solid production along with Ben. I stayed out of their hair really till it was my time to record my vocals. Brian Slagel from Metal Blade came down to sit in on the sessions it was very cool. 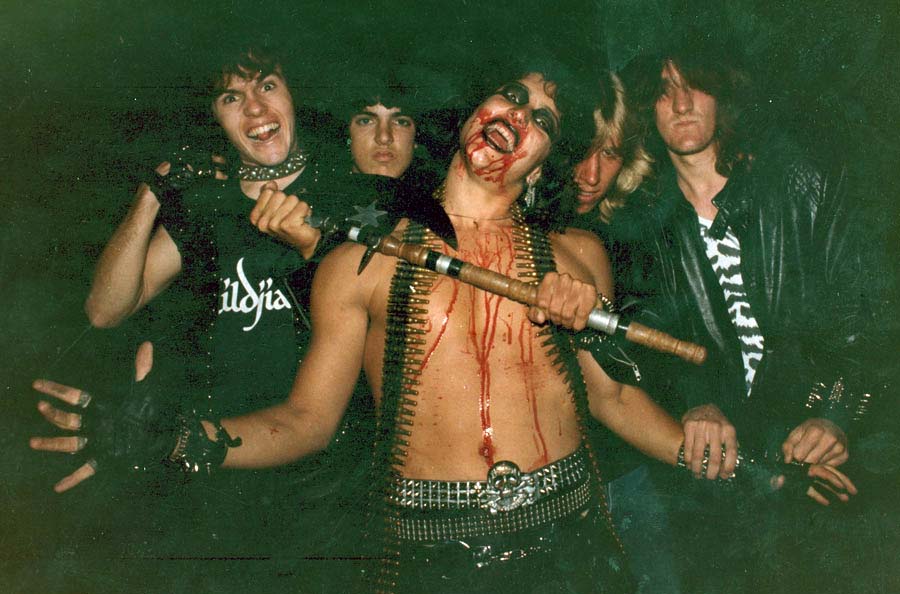 Half of the material, such as End of Time, Dungeon of Pleasure, The Morgue, Psychopath and Metal Knights stemmed from the Raw Mayhem rehearsal. Were they simply re-recorded or reworked?

It was the first time they were recorded in a studio. That other stuff was just practice tapes that’s all.

Was the the band taking the fast lane with the first full-length show?

Not sure. We just did what was natural to us and what we planned that day, when I came over with a game plan. It was going down our dreams were all coming true!

Do you think, that back in 1985, the US-Americans burst into the Thrash Metal scene in a very admirable manner, because they created their own niche?

Yes, original metal was exploding and there were many great bands starting up and living out their dreams. I think it’s cool that we inspired many of them.

How do you explain, that what makes Nasty Savage unique from other like bands is how you orchestrate your music?

Yes 1st off it’s all about the music an original unique sound from David, Ben, Fred and Curtis. My vocals really were unique, too. Together we wanted our own sound and we did it. The stage show was like no other!!! Kind of like Kiss meets pro wrestling meets Jim Morrison meets Alice Cooper meets Slayer. It burned images in peoples minds, ha ha.

The scene, the offer was very strong in 1985, thinking of releases such as Bonded by Blood, Hell Awaits, Killing Is My Business…and Business Is Good, Seven Churches etc., but you came out with a very solid effort that was very competitive. In your opinion, did it satisfy the demands of the fans?

It was who we were Nasty Savage from Brandon Florida and I am proud we made our mark and inspired man and created die hard fans 4 life. We are now meeting guys kids as a second generation of metal fans. Also a whole new metal generation is learning about NS and that is very cool.

Was it a highly polished hybrid of thrash and classic heavy metal aesthetics with one of the more charismatic vocalists on the job at the time?

I guess it was who we were and that we didn’t follow anyone, we paved our own image and sound and I am proud of that. This music and body of work have stood the test of time.

David Austin and Ben Meyer provide a strong and tight six-string section, and the rhythm section was powerful as well…

Those guys were brilliant with progressive power and that killer unique sound of Nasty Savage. Fred was also a master and Curtis was a monster on drums. 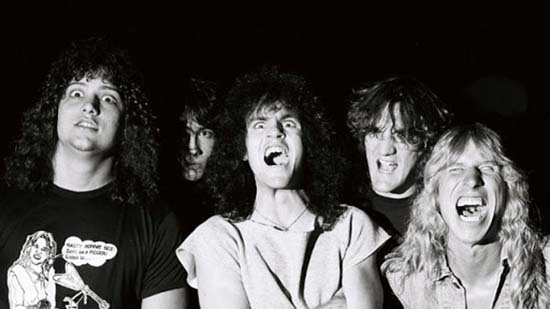 How was the record received those times?

Everything was all good, it was the beginning, reviews were all very positive.

How much support did you get from the label?

They did some promo for us, but we weren’t signed for life so I think that limited us. That may have been a downfall, because we didn’t have a music management company and were kind of behind on the real business side of things. It seems all bands get dicked somehow.

What were the shows like in support of the record?

Shows were always Mayhem 100%, the fans always loved seeing us live. Mayhem everytime with the music solid, twisted power backing it all up.

Was the WW III festival (Montreal – 11/30/1985 – together with Destruction, Celtic Frost, Possessed and Voivod) one of your highlights in your career?

Yes, at that time, yes, it was for sure. WW3 was like a dream come true for us. We just started playing out of State, I think the 1st album was out and we traveled to Montreal to meet with Possessed, Voivod, Destruction and Celtic Frost. It was awesome and we went on first, so I knew we had to set the tone for such an amazing night of metal. The metal fans were strong and full of energy, it was an honor for NS to play this show. It was such a good time and I think we need to find a promoter to create WW4 with all the same bands in 2021!!!

How is former drummer Curtis Beeson doing these days?

I don’t see him too much, but from what I hear he is still a beast and a great person, who I still have much love and respect for.

Ronnie, thank you for your answers! What are your closing words at the end of this feature?