The Finnish metal scene was always a special part in my notebook. Early acts such as Demigod, Xysma, Abhorrence, Funebre etc. would have deserved more attention from the fans than they’ve have got. But there was a band, Unholy, that was my ultimate one considering the Finnish metal movement. Last year I discovered a new outfit, Rottendawn, with legendary former Unholy vocalist/bassist Pasi Äijö in their ranks. Their debut album Occult reached the fourth place on my Top 10 releases of 2019 list, so it was enough reason to interview them. Answers were given by guitarist Joni Halmetoja.

Joni, before I would ask you about the band, how do you explain that the Finnish Death Metal scene has been revered for years as one of the best around in the early 90’s, and a fair amount of bands since then have incorporated its „signature” sound into their own?

I don’t really know how to explain this. I believe it has something to do with Finnish state of mind: we are gloomy, serious people vulnerable to depression (hah) and we love melancholic melodies and rough riffs, at least I do. I think we are good soil for this kind of music and we have lots of talented, ambitious hard working musicians.

What do you recall of the late 80’s/early 90’s Finnish underground scene? What kind of memories/experiences do you have?

I was mostly doing my own things with the band at the time, doing some gigs and sometimes watching fellow bands performing. It was interesting and inspiring time because there was so many talented players and potential bands rising and the underground scene overall was very strong, alive and active. It produced a lot of great musicians who are still around today.

In your opinion, which acts did become the most influential ones later on?

Well, in my personal opinion I must say that bands like Sentenced, Amorphis, Stone and Unholy just to mention few sure left their marks in Finnish metal scene.

Was the Finnish scene overshadowed by the Swedish one? I mean, did the Swedish bands get more attention, than their Finnish „rivals”?

I have never given much thought of that, but Swedish music industry in general has always been a bit ahead of us so it’s only natural if that has been the case.

Please, tell us about your musical background! How and when did you get involved in the underground scene?

I’ve been interested in music since little child. I don’t know if I was particularly musical or not but as a kid I used to sing in choirs and things like that. I think I was around 11 years old when I got into metal music and about 15 or so when I started to strum guitar. Pretty usual story. However I ended up to be a singer for many years which I found amusing because I consider myself a terrible singer. After that I had other interests for years along with music and just didn’t have the time I felt I needed to be active. Nonetheless I never did quit playing guitar and writing up ideas which I’m very happy today. So from my point of view I’ve always been in the underground. 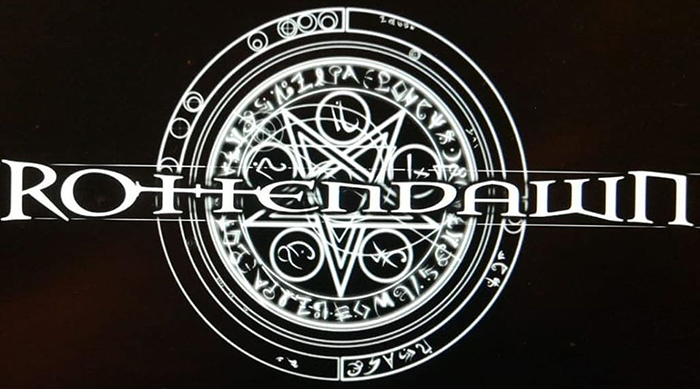 Rottendawn was formed in 2010, in Helsinki by you and Make Mäkinen on guitars, Mikael Arnkil on the drums and Pasi Äijö on bass/vocals. How did you get together?

At first there was just Make and me basically sharing ideas, making raw demos and creating the foundation for the band to come. At some point Make met Pasi and it didn’t take long until he joined to jam with us. Actually we had other drummer at that time but it didn’t work out the way we wanted. Then Make run in to Arkki some grocery store or something. Those two were starting Sinisthra together but ended up different directions back then. Anyway, we (or Make) managed to persuade him to play with us and things started to develop to right direction at last. I think the current and final line up was set in summer 2017.

How about the musical past of your bandmates?

What can I say? I feel honoured to create music with these guys.

Was it easy to persuade Pasi joining the band? What did he do after the demise of Unholy?

Yes, it wasn’t hard at all… felt like he was just waiting for something like this to happen. After Unholy he mainly concentrated to his family as far as I know.

Did he regularly follow what’s going on in the underground scene or was he completely „out of the business”?

I think he was totally out of the business.

Because Unholy is one of my all time favourite bands, I have to ask you, how much do you like that outfit? How would you like to characterize him as person and as musician?

Do you mean by outfit those famous hats? I fuckin’ love ’em! (Haha). Seriously, Unholy was a great band, ahead of its time. True legend. What comes to Pasi, great musician, friend and bandmate. Humble family man.

What can you tell us about your early rehearsals? Did you start writing originals or were you mostly jamming on covers?

Own stuff, immediately and definitely. Maybe sometimes a couple of Celtic Frost covers just to warm up. 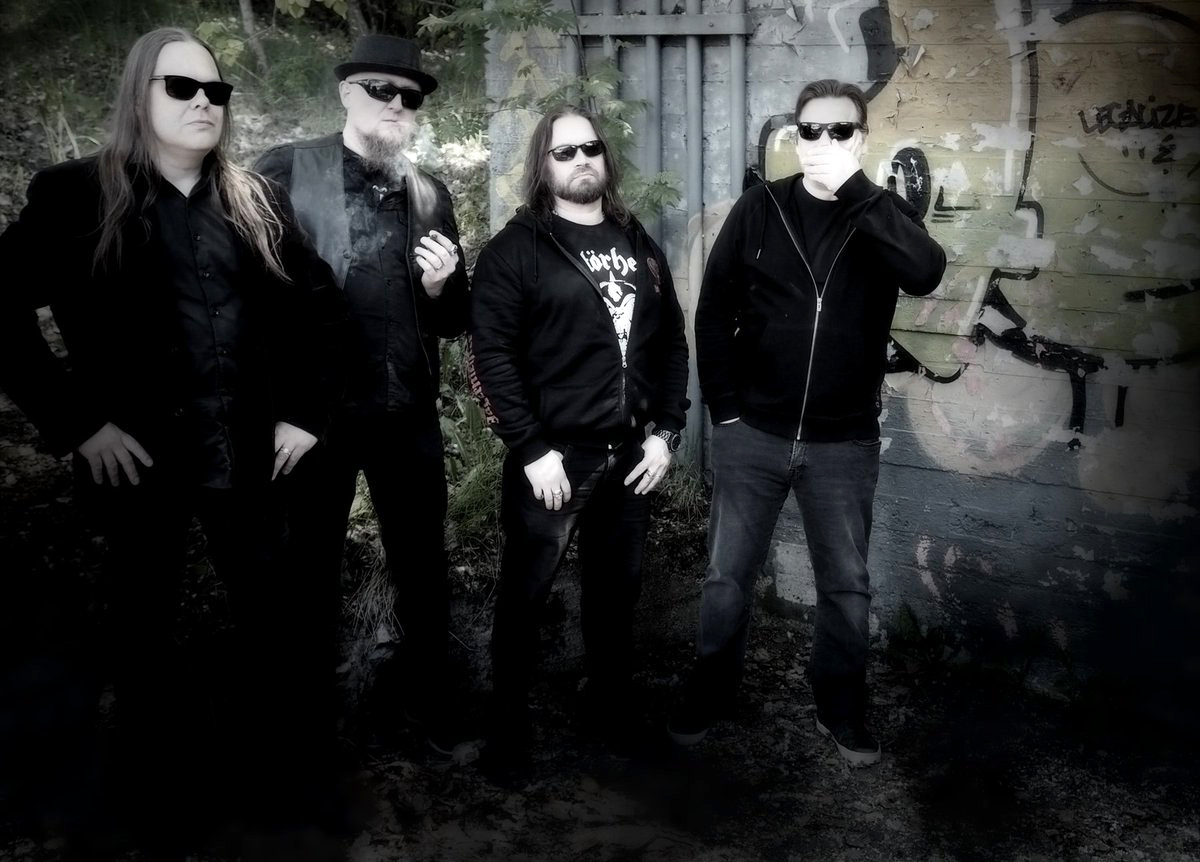 To what does refer your statement that Rottendawn is musically an uncategorized unit and the band doesn’t want to be pushed into a certain locker with its music, but is unashamedly abusing elements from traditional doom, death and older heavy metal?

Basically it means that we want to keep our freedom with songwriting and not to push ourselves into narrow box even if we still will operate with the musical elements as the statement says.

Have you recorded any demos or rehearsals, by the way, that you have shopped around/distributed?

How were you signed by Saturnal Records? Were there perhaps any other labels’ interests in the band?

Rex from Saturnal Records offered us a deal and it seemed good enough, so we didn’t really check out any other labels or offers.

What can you tell us about the label as a whole?

Saturnal Records is record label from Finland which is dedicated mainly to Black Metal. Signing us has made a little confusion for some people since we are not even close to a Black Metal band, but I think they wanted to expand their roster with someone like us who represents other “extreme” metal style as well.

When did you enter the studio to record the album? How did the recording sessions go?

We started by recording drum tracks in summer 2018 and last of the vocals was completed in spring 2019. We didn’t hurry with the recordings so much, we all have day-time jobs and other obligations as well but for me personally sessions were mostly fun and inspiring. Besides guitar and keyboards Make did recordings, producing, mixing and mastering all by himself (not to mention the album covers, too) so he had to do the biggest job for being there every single minute of the sessions just for the recordings alone.

Is Occult a consummate doom album?

I’m not sure if I dare to say it’s consummate of any kind but I would say it represents pretty well what we wanted to achieve when we started to plan it. 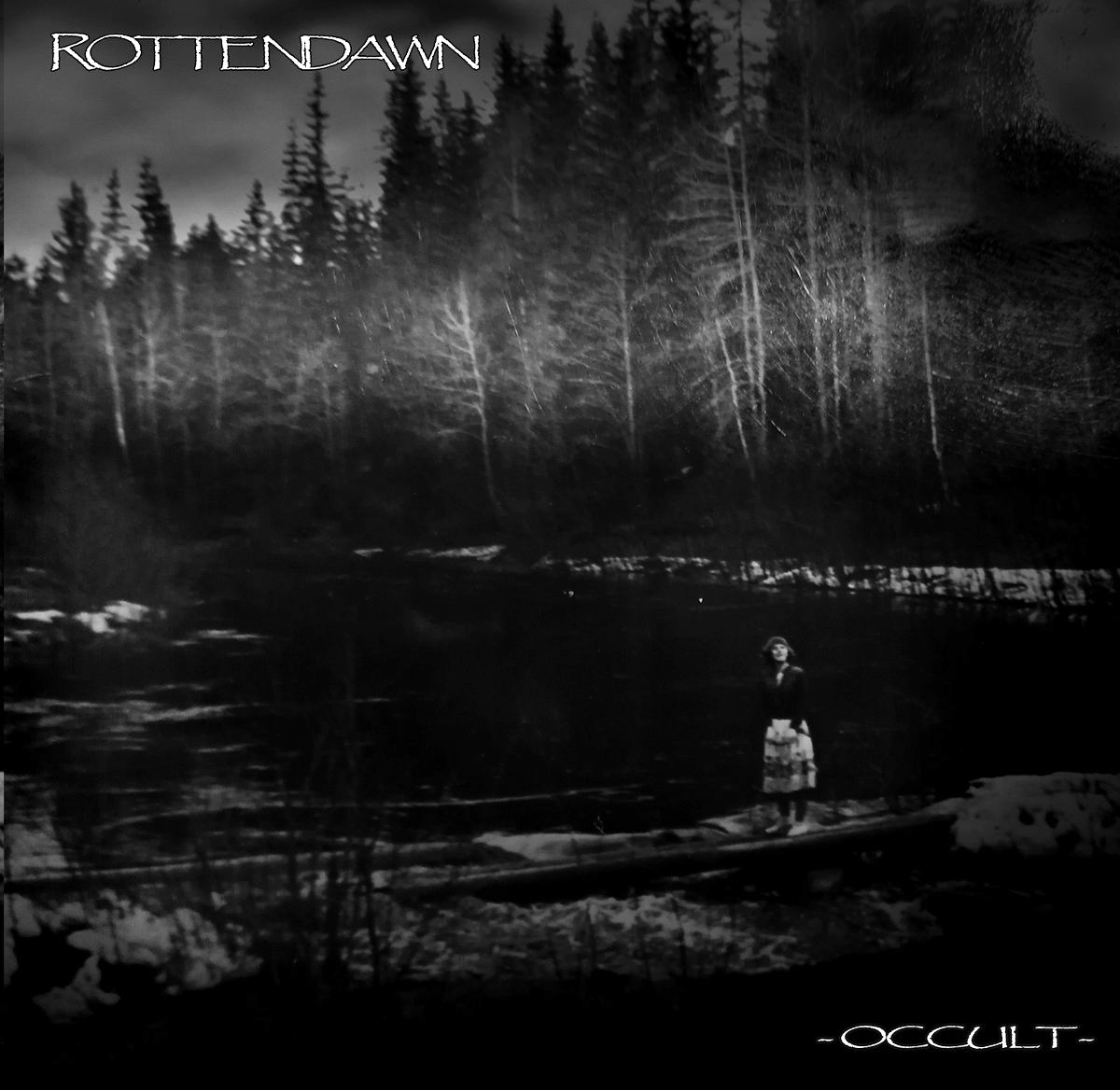 The songs are all over the 7 minute mark and coalesce through slow and mid-tempo passages of epic doom, do you agree with it?

I think I can not deny that. (haha)

Dawn Dwellers was one of the singles released for this album, and it is definitely one of the strongest songs presented. Does it perfectly represent what you wanted to acheive with Rottendawn?

I would say at least it´s very close to that. I mean, the whole album represents very well what Rottendawn is today.

I would say that you wanted to avoid the comparisons with Unholy, Rottendawn hasn’t anything to do with Unholy…

Well, that is correct, and should stay that way.

Do you think that most tracks on this album follow a similar theme as Dawn Dwellers: very epic melodies fortified by crushing, rhythmic riffing?

I do underline similarities of the tracks when it comes to epic melodies and crushing, rhythmic riffs (of course, haha).

Do each track has an identity and that is what keeps this album going?

Yes, they do, and I’m very satisfied how we put the album in whole, each track is right where they belong.

Would you say that the songs are combining uplifting yet somehow simultaneously melancholic melodies with heavy riffs and impeccable songwriting?

Even if I disqualify myself talking about impeccable songwriting when speaking Rottendawn songs, yes I would.

Do some songs even have a darkness and almost gothic atmosphere to them that works well with the heavy guitars?

I guess they do, they should. Dark atmosphere is one of the things I would like people to feel when experiencing Rottendawn.

The album was produced, recorded, mixed and mastered by the band. How did that happen?

As I mentioned before: we decided to go totally DIY. We built a small studio of our own to our rehearsal place. Very modest, just the necessary gear we needed. After finishing the recordings Make did carry on by mixing and mastering the album.

Were all of you satisfied with the end result?

What kind of reviews did you get on the record? How was it received?

There has been very positive, positive and not so positive reviews which is okay ’cause that was what we expected. I think it was received quite well though the audience is still quite marginal.

How many items did you manage to sell it?

We have no idea…

What about your future plans in terms of live shows, a second album etc.?

At the moment we have a couple of new songs and we are sharing ideas for more to come. We have no hurry for second album but you never know what happens. What it comes to gigs we definitely will do some, maybe some festivals or so. Anybody?

Joni, thank you for your answers! Any closing words for our readers?