Guitarist Tim Piispanen about the story of Chemikill – Part II

In 1989, the band initiated the recording of a five song demo at TKO Studios. What can you tell us about it? Which songs did you plan to record?

We had every intention of making a demo. Instead it was an early attempt at recording Chemikill on a very tight budget. Completely broke, we found a studio that would put up with us for $400. We recorded our first batch of songs Screaming for More, (Fear) The Warrior, Blackened Void, Hell to Pay, and Edge of Wasteland and maybe one more. But it wasn’t coming out very good. Bill Peters from Auburn Records had just discovered us at this time and wanted to include us on his upcoming Heavy Artillery album. So he brought in his producer and they tried to salvage a few of these songs. Bill eventually decided we needed a better recording and set us up at Beachwood Studios to try a couple more.

Is it correct that at the time Fred had some problems with his throat, namely polyps on his larynx requiring surgery, taking a hefty toll on the amount of recording and live performance, he was able to handle at the time?

That’s crazy. I had to double check with Fred but he has never had any throat issues, polyps or surgeries.

With the demo never finished, hence never released, the band went on to record a two-song demo at Beachwood Studios in 1990, which included the song Deadline, which would appear on Auburn Record’s Heavy Artillery compilation in the same year, right?

There was very little time between bailing out of the TKO recordings and starting the Beachwood sessions. We recorded Fate Worse than Death first then Deadline. We never intended to release both songs, we just needed one killer song for Heavy Artillery. So the Beachwood sessions were like an extension of the TKO sessions that resulted in the killer version of Deadline we hear today. All the remaining songs were scrapped but somehow got leaked, bootlegged and wound up as fan demos.

What about this sampler as a whole? You also had a promotional tape, Live at the Phantasy Theater, November 16th 1989, haven’t you?

It wasn’t really a promotional tape. It was a decent quality live board tape from that show that got passed around via tape-trading. Likely because we just didn’t have much studio material released, it was a good representation of the band for what it was and the fans liked its live energy.

Shortly after the release of Heavy Artillery the band broke up. What kind of reasons did lead to it?

I think it was just bad timing. We emerged at a time when the market was already saturated with metal bands and Grunge was becoming the new fad. We tried to evolve and adapt by adding members and tweaking the line-up. Other area bands were trying the same thing as the fans were starting to get older and were not going to the same clubs. The scene was changing right before our eyes. It may have seemed hopeless to enter the next chapter of Chemikill given the shift in musical tastes at the time. 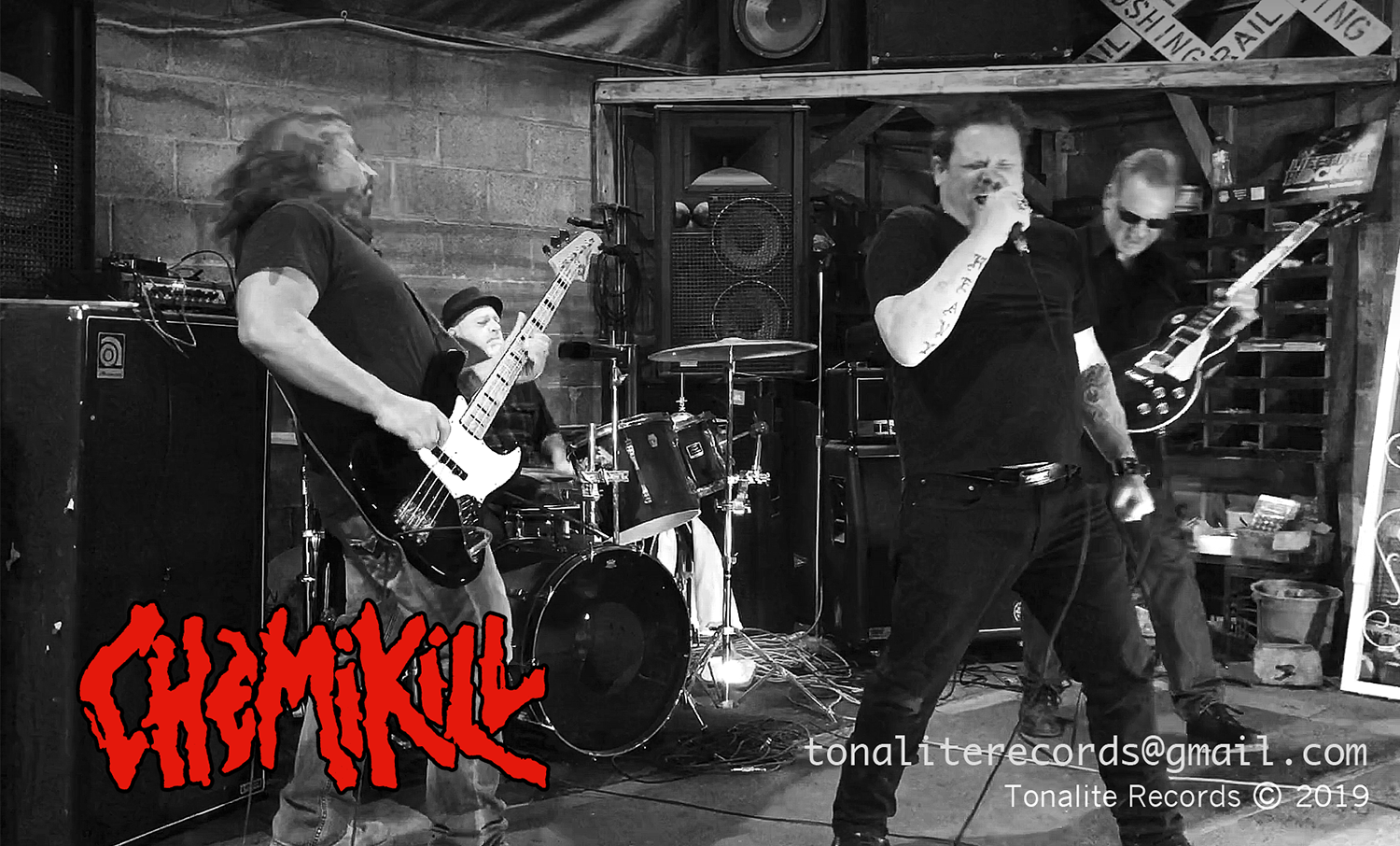 This was an example of what was happening in the Cleveland metal scene at the time. Bands were re-aligning as the times were changing. Fred and I attempted to unite with some original Purgatory members to form a supergroup. We rehearsed for a month or two playing some Chemikill songs and some Purgatory songs and then we played only one show. We may have written one new song but we spent the majority of the time re-hashing old material and dreaming about what could be. This formula did not work very well. Playing each other’s material resulted in somewhat inferior versions of each. We needed more time to develop our own chemistry and write new songs but it just wasn’t to be. The group disbanded shortly after the first show and was the beginning of a long dormant period for Chemikill.

Did you record any materials? Did you perform a lot with this band?

We did not record any material with Victor Fist. There was another live board tape created from our one and only show that was leaked, bootlegged and is now floating around on YouTube somewhere.

What made Fred Flory to move to Arizona? Were you familiar with his musical activities after Chemikill’s demise?

Shortly after the end of Chemikill and Victor Fist, Fred was playing in a couple of cover bands. One was a Black Sabbath tribute act called Sabbra Cadabra. Fred can impersonate a very convincing Ozzy. The other was Captured with an ex-Purgatory guitarist. Captured excelled at performing stirring versions of epic classic rock songs and even wrote a set of original material getting some airplay on local rock stations. After a couple years run in these bands, Fred moved to Arizona to find a change of scenery.

In your opinion, how much did change the metal scene during the 90’s compared to the 80’s?

The 90’s brought change to the US metal scene and particularly in Cleveland. Hair bands were out and Grunge was in. Mullets were everywhere. A few metal strongholds survived but the fans got older and had kids. Cover bands and dance music ruled the clubs now. It was like the damn twilight zone.

In the early 2000’s was done a Chemikill Myspace page. Did it help to keep the band’s name alive?

I vaguely even remember this to be able to comment on it. This may have been a fan owned page – or an ex-guitarist. I just don’t remember.

You reunited for a short time…

We actually reunited twice over this period. In 2007 we attempted a studio recording session for Edge of Wasteland in Cleveland with Auburn Records. All of us lived in a different state and we came together for about a week to record around 10 tracks. We never finished the tracks and we settled back into our routines until 2010 when I moved back to Cleveland for good. We tried again to reunite but Fred was unable to return from Arizona at this time. We would not try again until 2016.

In 2016 the band came together for a reunion show for Bill Peters’ radio show. What was your goal, motivation with this comeback? What was the line-up?

Near the end of 2016 Bill Peters invited us to play at his annual holiday benefit concert. We had tried to play this event a few years earlier but were unable. This time our schedules aligned and we were able to get in 3 solid months of rehearsal. It was billed as the official 25 year reunion show with all original members: myself on guitar, Fred Flory on vocals, Mike Seleman on drums and Calvin Burgess on the bass.

Was it easy to reunite the band, by the way?

The difficulty has always been logistics. We had all been living in different states through most of the late 90’s and early 2000’s. 2016 was different though. Three of us were back in the Cleveland area with spare time on our hands. The benefit show came up, we were available and just made it happen.

Those days, you said, „we have never been more rehearsed than we are now”. „Now is the time to make the record we always wanted to make!” – does it mean that you took the band more seriously than before or the circumstances became better?

I simply recognized an opportunity. The extra time we were afforded to rehearse and the success of the show created momentum. I could hear a difference in how we executed the material. We were more polished, more confident, more seasoned. Remember that we had just tried to record these songs a handful of years earlier on very little practice. So we booked some studio time and tried again. It still took 3 years to finish from that point.

The present line-up of the band consists of you on guitars, Fred Flory on vocals, Mike Seleman on drums and Mark Alexander on bass. How about the past Chemikill members? Didn’t they show any interest in the reformation?

The core of the band and original line-up has always been just 4 of us. Mark Alexander signed on about half way through the 3 year process of releasing Edge of Wasteland after the departure of Calvin Burgess the original bassist. 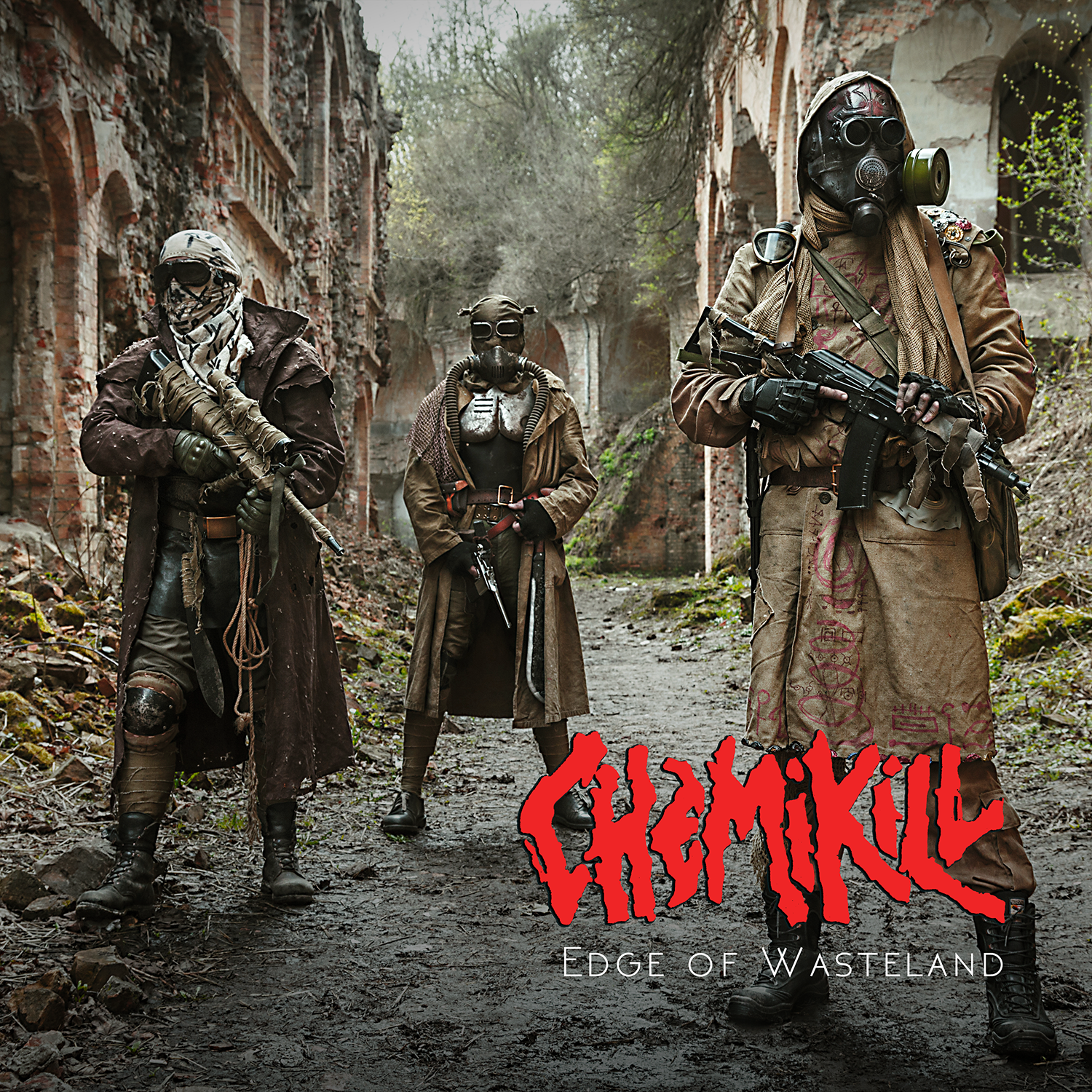 At the end of September was the Edge of Wasteland record released. I ask you to tell us everything about the album!

This is the album we had been trying to make for 25 years. It’s a time capsule of classic Chemikill songs that defined our sound. Most of these may have only existed on bootlegged tapes or rough demos. We took a fresh approach on every song, tweaked some arrangements and added some new guitar parts. It even includes a brand new song written in 2016 titled Blood Red Sky. We actually had mixes to evaluate within the first year but we just weren’t happy with them. We re-recorded the guitars and vocals several times to finally get the right mix almost 2 years later. Most of all, we are happy to finally complete it and share with our fans both old and new.

It came out by Tonalite Records, is it your own label? Do you concentrate on signing new bands as well or only on Chemikill?

Tonalite Records is our own label. Today you have more control over releasing your music than in the past. When you sign up for digital distribution you need to create a label so that’s what we did. We are only concentrating on promoting the Chemikill release right now and working on new material.

Are there any shows or tours in mind to support the record?

Our record release show will be on December 14, 2019 in Cleveland for Bill Peters’ annual holiday benefit concert. No plans to tour immediately after that. We want to work on new material and release something new in 2020. We would then be open to touring to support that. In the meantime you never know, we may show up at some venue or festival somewhere if the opportunity arises. We’ll be sure to post on our Facebook page when we do.

Tim, thank you for the interview! What are your closing words for our readers?

First off I want to thank you for taking the time to interview me and allowing us to tell the amazing story of our 30 year journey to our debut album! We are getting great response since its release and are excited to share it and our story with the fans. There are many more chapters in the Chemikill story to come and we look forward to seeing what comes next.