Legendary American thrasher Sacred Reich and Swedish squad Grave will appear on stage – both of them headliners – Friday night (15th November) in Dürer Kert. On the occasion of this, we had an interview with Tobias Cristiansson, bassist of Scandinavian Death Metal band.

Do you remember how much did you play in Hungary? If I’m correct, it isn’t your first show in our country…

Tobias: I´m not sure how many times Grave has played in Hungary, but I know that last time we were there was in 2014 on our tour together with Entombed A.D. I remember that it was a great show. We always get a great response when we play the countries in Eastern Europe. It’s really a great place for extreme metal in general, I think.

Your last album Out of Respect for the Dead was released four years ago. How was it received?

Tobias: It was very well received and we got overall great reviews. We did a European tour in support of the album together with Malevolent Creation plus a lot of festivals here and there.

Drummer Ronnie Bergerstål left the band last year. What kind of reasons did leave to his departure?

Tobias: Ronnie left the band in 2017 because of many different things. It didn’t really work out as we wished in the end. But I’m still on good terms with him and I see him every now and then on different gigs and festivals. He is now back with his old band Demonical again which I think is great for him.

He was replaced by Tomas Lagrén. How did he get in the picture exactly? What about his musical past?

Tobias: Tomas did the first gig with us in 2017 on the Maryland Deathfest in the US. He learned all the songs on a very short notice and he pulled it off with a great attitude. I’m really happy to have Tomas in the band and he really brings a positive vibe and I love his drumming style. He has a groove to his playing that I like. He´s not stiff like some other extreme metal drummers tend to be sometimes. Tomas has both played guitar and drums in other bands before joining Grave. He played guitar with Facebraker on a tour and he has also played drums with a doom band called Crowns Over Bravellir. 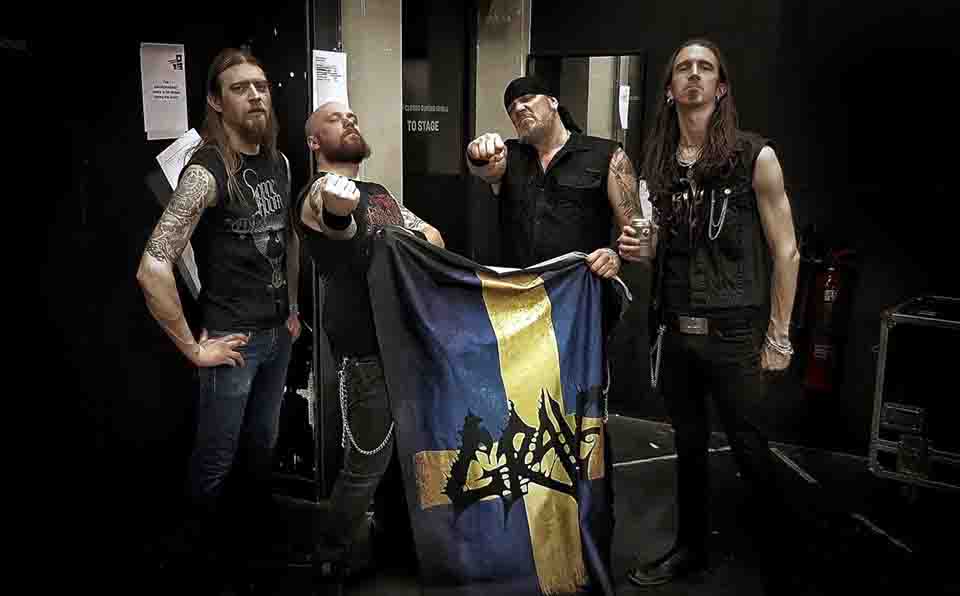 Is he the brother of guitarist Mika Lagrén?

Tobias: That´s correct. It makes it ease because they can easily meet for rehearsals and they are a great team together, and they both have the same kind of sick humor.

Did you already start writing new songs for the next album? When do you plan to release it?

Tobias: We have been having a few writing sessions but we still need to continue a bit that work to be able to arrange the ideas that we have. I’m not sure when we can present something new yet.

Except Dominion VIII and Burial Ground, all of your albums were released by Century Media. Does it mean that you happy and satisfied with the support, promotional work of the label?

Tobias: Century Media was there since the early days of Grave and after a break of a few years with Regain Records we are back with CM again. They are good for us, and the people who work there, are all great persons. They have done great promotion for us and supported us in a good way so far.

How about your early bandmates, Jens Paulsson and Jonas Torndal? Are they still involved in the metal scene?

Tobias: Jensa have not been involved in any other bands since he left Grave in 2002. Jonas have been playing a little bit after he left Grave but nowadays he´s not in any band. But I see Jonas from time to time at different gigs, he is still going out to enjoy the metal.

Grave has a very rich discography, you are one of the forerunners of the Swedish death metal movement. Which is your favorite Grave record? Which Grave record would you name the best, respectively?

Tobias: My personal favorite is You´ll Never See. When I was a teenager I used to listen a lot to that album when I lived together with my parents. It was really exciting times with all this new and fresh death metal releases. I was fascinated with the darkness and heaviness of this new sound. My other favorite Grave album is Endless Procession of Souls which I think has some really strong and varied songs.