Drummer Greg Seymour is about the band Purgatory – Part I

Last year passed away a lot of heavy musicians as well. One of them was bassist Richard Bateman, who was involved in Nasty Savage, Agent Steel etc. This excellent player began his career in Purgatory. Dedicated to his memory, on the base of mainman Jon Shaffer’s idea, Century Media released a vinyl E pin December last year. This time, former drummer Greg Seymour was so kind to share his views about those times.

So Greg, do you still remember how did you get in touch with music and particulary with hard rock/heavy metal? What did you find so exciting, interesting in that music?

I became interested in music at a very early age. I am the youngest of 4 children and my brother and 2 sisters were all into music. Around our house when I was around 3 or 4 years old you would hear everything from The Partridge Family to Black Sabbath. I also remember hearing Johnny Cash and I thought that he was cool, I liked his voice. What most interested me about music was how it could bring out different emotions in people, music can be very powerful.

When did you decide becoming a musician? Did you pick up drums right from the start or…?

I decided that I was going to be a musician when I was around 3 or 4 years old. My brother who is 10 years older than me exposed me to bands like Grand Funk Railroad, Deep Purple. Black Sabbath, and Steppenwolf. He also turned me on to bands like Alice Cooper and The Who, both of whom were very visually exciting, so the combination of the heavier music and the visual excitement of those type of bands is what caught my attention. When I was about 4 years old my brother would put a record on the turntable and headphones on my head and tell me to try and play along on his drum set. I also messed around with the guitar, but I am left handed and in the 1970’s it was hard to find left handed guitars, so I would play a right handed guitar upside down which was kind of difficult. I didn’t really start playing drums seriously until 1985 when Jon and I started trying to form a band.

Which drummers did have the biggest effect on you? Were you self-taught by the way?

Other that what my brother taught me when I was really young, I am pretty much a self-taught drummer. My biggest influences as a beginning drummer were Keith Moon (The Who), John Bonham (Led Zeppelin), Don Brewer (Grand Funk), and Bill Ward (Black Sabbath).

You grew up in Florida, in the near of Tampa. What kind of memories do you have from that period? How much, how deeply were you involved in the underground scene?

I grew up in Fort Wayne, Indiana. When I was 15 and 16 I spent about 1 year in the Tampa Bay area, and then relocated back to Florida in 1985 with Jon when we were trying to form Purgatory. I have a lot of memories from 1985-1986, some are good, and some are bad. Jon and I had a lot of hard times in the first couple of years that we were in Florida. We had very tough jobs and we did not make much money. We drank too much and got into quite a bit of trouble because of it. But we had a common goal in our musical dream, and we worked our asses off in our quest to make something happen. By late 1986 when Purgatory was finally a full band we were pretty well involved in the Tampa Bay metal scene, however, I don’t think that we ever really felt connected with most of the other bands. Unlike the Thrash scene in San Francisco, the Tampa scene had a lot of division and separation among the bands.

Did you perhaps take part in the tape trading/fanzine network? Did you have penpals, whom you traded tapes with?

I was not really involved in tape trading. It was something that we were all aware of, but did not participate in. We did send out our Purgatory demos and once in a while we would hear from a kid in South America, or a fanzine from somewhere, or a European magazine or radio station.

Leading the way throughout the 80’s there were metal bands such as Stranger (formerly known as Lynxx, and later Romeo), Savatage (formerly known as Avatar), Siren, Powersurge, Purgatory (later known as Iced Earth) etc., some of them would eventually sign major label deals during the 80’s: Stranger signing with Epic/CBS Records in 1981, and Savatage signing with Atlantic Records in 1985. Did they open the doors for other bands, both locally and nationally?

Absolutely. When I first came to Tampa in the summer of 1983, I remember seeing Stranger in a club called the “Mark Twain”. I also saw a couple of the local music magazines and realized that Tampa had a lot of places to play, and also noticed that some of the clubs would let bands play original music. So, in 1985 when Jon and I were told that we could no longer live with his mother and step father, Tampa was our place to go, L.A was too far and we did not have the money to get there, and I had a sister who lived in Tampa that we could stay with for a month or two.

But for sure the 4 bands that really got the ball rolling in Tampa were, Savatage, Stranger, Lefty, and Nasty Savage. Those bands played the clubs and sometimes put on their own shows in warehouses or fields. They brought national and international attention to Tampa’s music scene, and gave the younger bands some confidence. Purgatory, Siren, and Powersurge came a couple of years later. 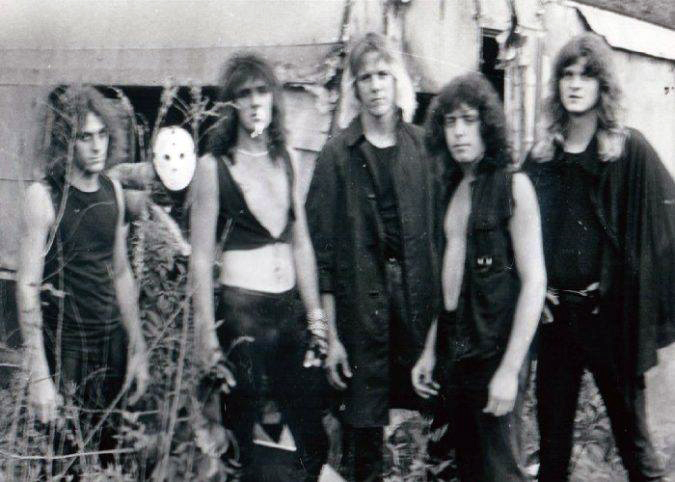 What were the venues, clubs in Tampa for metal those times?

In the early eighties the Hard Rock/Metal clubs were: The London Victory Club, Mark Twain, The Stadium Lounge, Ruby’s Pub, 49th Street Mining Company. In the later 1980’s the main clubs were: The Rockit Club, The Ritz Theater, Janus Landing, The Brandon Pub, The Volly Club, The Brass Mug, and most importantly The Sunset Club.

How about other Florida scenes such as Brandon, Miami, Fort Lauderdale etc.?

I am not sure about the scene’s in Fort Lauderdale and Miami, other than goofballs like Marilyn Manson came out of one of those areas. The Brandon scene I do know about. Brandon Florida in the 1980’s was a small town just a little East of Tampa. In 1983 a few metalheads got together and formed Nasty Savage. They played original music and had great songs, image, and stage show. Nasty Savage played some of their first shows on flatbed tractor trailers in the middle of cow fields, and used gas powered generators to supply power for the P.A. system and lights. Nasty Savage inspired a lot of young musicians in the Brandon area. By the late 1980’s bands like Xecutioner (Obituary), Abbadon and Oblivion had all formed in the Brandon area along with countless others.

During the period of the 80’s and 90’s a new genre of Heavy Metal music took shape and became hugely popular in the Tampa Bay area as well, called Death Metal. What were your views on that new style of metal?

As far as Death Metal goes, I was not really into it at first, but after a while it started to grow on me. Some, not all, but some of the bands have really progressed and perfected their craft. I am a fan of Obituary and Morbid Angel. It is like any other type of music, some is good, some is okay, and some just suck.

Do you agree with that the Death Metal bands were becoming extremely popular on the local music scene as well?

I do think that the Death Metal Scene was very big in the Tampa/Brandon area. There were lots of Death Metal bands and they had a pretty tight knit community.

An important role played Morrisound Studios – owned and operated by brothers Jim and Tom Morris – in the Tampa metal scene, would you say, that since its opening in 1981, Morrisound has been responsible for the popularization of genres such as Heavy Metal and Death Metal, but caters to every genre of audio expression?

When Jon and I bought the first Nasty Savage album in 1985 we noticed that it was recorded in Tampa at Morrisound Studios. Not long after that we found out that Savatage had recorded there as well, we figured that if we ever had the chance, that we would like to record there, too. One of the best things that Morrisound had to offer was recording engineers that actually liked Hard Rock and Metal music. It is always important to have a recording engineer that is into the kind of music that your band plays, if not, the recording can lack enthusiasm and quality because the engineer is not into it. Yes, Morrisound has been very important to the Tampa Bay Metal scene as well as the music scene in general. The Morris brothers (Tom and Jim) and former engineer/producer Scott Burns would take interest in the bands that they were working with and would also offer advise about the music business to young bands.