I think so, the name of Massacre doesn’t need any introduction, the band’s name speaks for itself. This time, original bass player Michael Borders shared his views to us.

Michael, you have been inactive for a while musically, but this year you joined Massacre again. How did it happen?

I wouldn’t say inactive completely. Just absent from the whole death metal thing. I played in a band in South Florida for a few years and have done a fair show of studio work. A few months ago, Rick called me. I haven’t spoken to him or Kam for that matter in 30 years. He pitched the idea, told me there was interest in the band, sounded like a bit of much needed fun and here we are.

How about the mood, chemistry within the band these days?

The mood is positive right now. We keep it light hearted, not the serious nature we had 30 years ago by any means. We intend be solid, kick ass, but are really wanting to have fun this time around. Enjoy it a bit more than we did 30 years ago. Chemistry is good. We have no misconceptions about where we are going or issues about what we want to sound like. So it’s all good. When we get together it just sounds a certain way. And thats a good thing.

How often do you practise or jam? Do you often hang out together?

Rick, Kam and our drummer Mazz all work in the same place, so they are together daily. I live a couple of hours away. We practice one day a week. We really never were the type to hang out together too much. We were friends , we get along, but too much togetherness is not always a good thing. Plus we all have families, jobs, responsibilities. 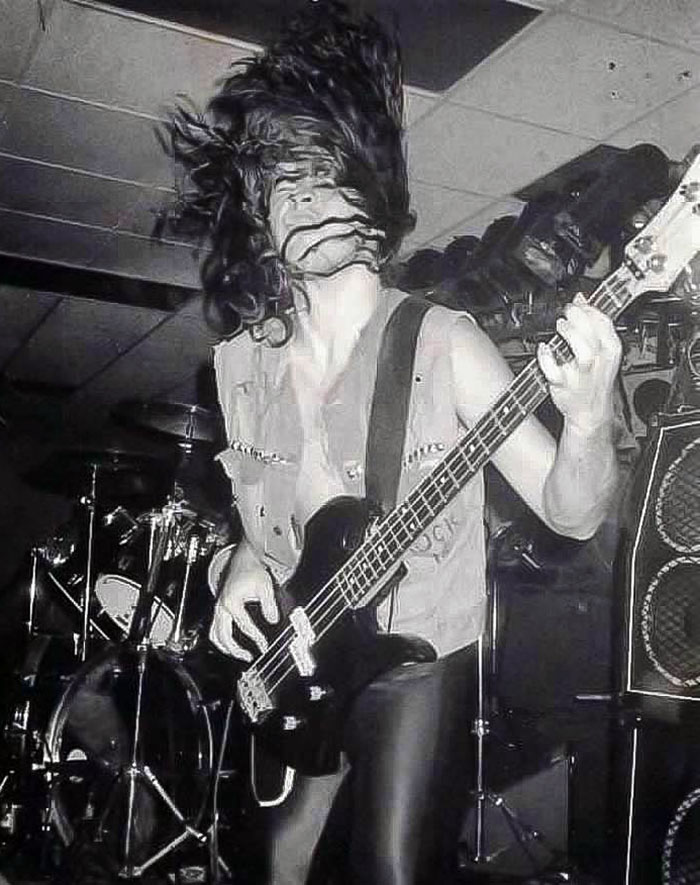 End of May you performed in Germany at the Fuck the Commerce festival. How did the show go?

The show went OK. There is always room for improvement. I tend to listen to tapes of everyting we do and pick it apart after the fact. For our second show together over three decades it was pretty good. Some equip issues, but was still a cool trip.

Did you perform any warm up shows prior to your gig at the Fuck the Commerce, by the way?

Yes, we played a local show in Orlando with Druid Lord, Sadistic Vision and False Prophet. A really small venue, but was like old times.

Right now thru our upcoming show at the California Death Fest in July we are playing From Beyond album as a set. It’s what people know, it’s what they want to hear. The audience is singing along, which really freaks me out for a Death Metal show. But it’s cool.

Were you satisfied with the sound and the circumstances as a whole?

Sound can always be tricky. I think as long as it has our thick, heavy sound we are going for its good. We’re really trying to emphasize the heavy riffs of what we do. 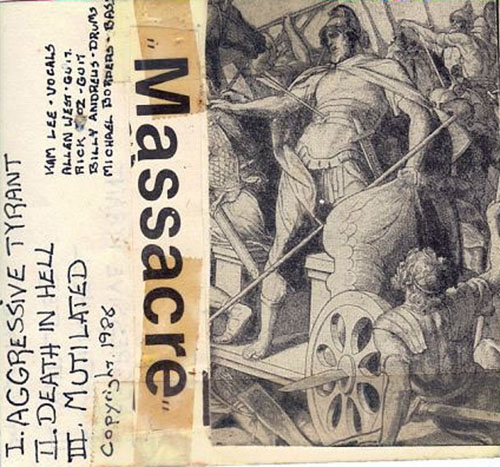 How were you welcomed by the fans? Did the show live up to your expectations?

Fans ate it up. Has been an excellent response so far.

As I as know, you have some upcoming gigs, all of them are festival ones? Do you perhaps plan to do any headliner shows in clubs?

We’re doing a mix. We have the Destroying Texas Fest next week (June 29th) then California Death Fest in July. After that we headline some club shows in Chicago, Puerto Rico, then three more dates in Texas, then we go to South America for five days headlining in November!

Did you think about to play live songs such as Aggressive Tyrant, Mutilated, Clangor of War or Death in Hell?

Kam and I were just talking about it. We are pushing the whole “old school” thing right now and will be adding Aggressive Tyrant and maybe a few other demo surprises into the set.

Is there any plan with this line up to record a brandnew Massacre full length?

We all have ideas, riffs, song parts, of course we would love to release something new. After the new year we will sit back and plan our next steps, right now, it’s just 4 old friends getting together and playing metal. 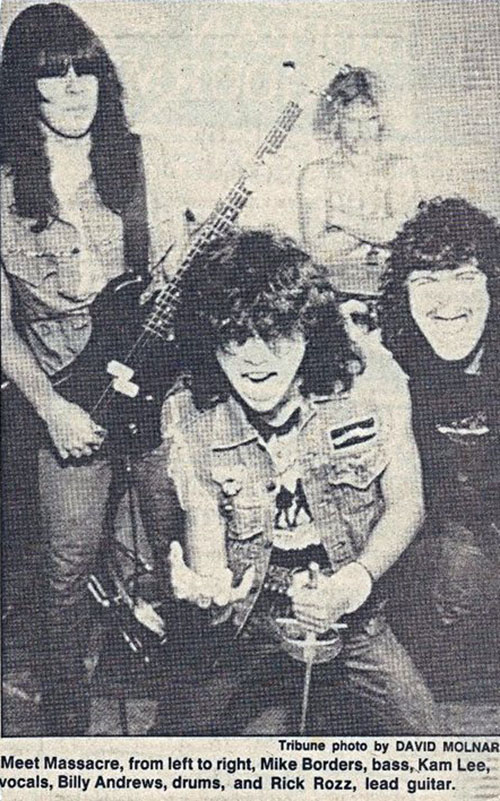 Now, let we back a little bit to the old days! Is Massacre one of the pioneers of Old School Death Metal and the godfathers of the Florida Death Metal Scene since 1985?

Obviously Death/Mantas was out before Massacre, but when our first demo came out it was definitely one of the first Florida Death Metal tapes to hit the shelves.

How did the band get together exactly? I read about names, such as Scott Blackwood (bass) and Mark Brents (vocals).

OK, history time. A million years ago, there was this hair metal band called Massacre. Played cover songs. Anthrax, Omen, etc. Bill Andrews was the drummer, and Allen West the guitarist. JP Chartier played guitar as well and Scott Blackwood played bass, and Mark Brents tried to sing. That band broke up, Allen and I started playing together with Greg Gall (Six Feet Under). We wrote the songs that became the first Massacre demo this point. Greg and I didn’t play well together so Allen and I hooked up with Bill Andrews an JP and Mark. It still wasn’t a death metal band this point. One night we hooked up with Kam, and boom. A few months later Rick joined.

It’s well known that prior to Massacre singer Kam Lee have been in Mantas/Death, but what about your musical background?

Just a lot of shit bands in high school. We’re all really young when Massacre started.

Did you know each other earlier, by the way?

At which point and why was Allen West replaced by Rick Rozz?

A few months after Kam joined Rick was board. Allen had issues. Was hard to depend on him. I hope he was able to get fixed up after all these years.

Would you say that Death Metal was in its infancy those days?

To put it mildly.

Kam Lee stated that the very first Death Metal band was Possessed, that had a great influence on you, is that correct?

I wouldn’t say they influenced us. Not a lot of style similarities. Obviously they broke ground, but we sounded nothing like them.

How deeply were you involved in the tapetrading/fanzine network back in the day?

Huge. Remember there was no internet back then. If you weren’t part of that, no one would hear you.

How many demos did you record altogether back in the day? Could you give us any details regarding on them? I mean, how were they recorded, how did they sound like, which songs were on them, did they have a cover etc.?

We did three “official” demo tapes. The first one with Allen, the second with Rick and a live tape. All three had covers, and were recorded with whatever resources we could afford at the time.

Kam Lee also stated that „those demos changed the entire Death Metal scene as we know it… This was the landmark ’death-vomit’ style vokills that made me the most ripped off artist ever, one who has never been given credit for it! This was the true beginning for Death Metal low growling vocals!”. How would you comment it?

I agree, he was the first to go low. Really no one before him to make that effort to growl like that.

Were the demos spread around in the tapetrading circuit? Were they perhaps shopped around to attract labels’ interests?

We didn’t play out that often. Really the local fanbase was limited. Audience grew with each show which was cool, but there was limits. These early shows were still something new to the locals. And you either loved what we did and instantly got into it, or totally thought we sucked.

I would ask you to sum up your opinions about the The Second Coming demo, From Beyond, Inhuman Condition EP, Promise, Condemned to the Shadows EP and Back from Beyond album…

In all honesty, I have never listened to any of them. Hell I had never heard From Beyond until a few months ago. I would listen to our old demo tapes every now and then, but that was about it. Honestly there is not a lot of Death Metal on my playlist these days. I’ve become more of a fan of stuff like Melvins, Eyehategod, Church of Misery. Still addicted to the riff…

How do you like the Tyrants of Death compilation, that was released back in 2006?

I was kind of responsible for it. Costa at Iron Pegasus contacted me. I was laughing about all the shitty bootlegs and he asked if I would be interested in a proper release of the old tapes. I jumped on it. Hooked him up with my original recordings, photos, anything and had.

In my collection can be found a bootleg material Europe and Beyond – Live in Germany 1991. Are you aware of it?

So many bootlegs I lost count. I used to collect them. T-shirt bootlegs are really big still.

Is Massacre’s name still big and it’s in people’s minds?

Maybe in ours, ha-ha! We have a new generation of fans which is really cool, but the old guys coming out to see us kicks ass.

Michael thanks a lot for your answers! Anything to add to this feature for the Hungarian fans?

We have fans in Hungary? Cool. Some photos of hot Hungarian girls on Massacre T-shirts would be nice. Send us some love, ha-ha. Thanks, man!