Anders Lindberg is about his endless one-man show

Age of Nefarious, Excöriator, Gaslarm, HeadQuaker, Psychotrone, Secret Attack, The Porridgeface – behind all of them is the same person, Anders Lindberg, who created 32 (!) LPs in the last 8-9 years, mainly on his own. I found out about his works through the Psychotrone albums, and after all I wondered who he is.

I started when I was around 5 and played around with an accordion for a couple of years before I started with the guitar. When I was a kid I listened mostly to The Beatles. Around 1979/80 Motörhead came into my life. I have been playing metal since around 1983.

Your first instrument was an accordion, but which one do you consider your main instrument now?

I consider the guitar to be my main instrument, but I am not exactly good at it!

Which bands, albums took the biggest effect on you?

In the very beginning it was Motörhead for sure and Judas Priest but the band that changed it all was Metallica in 1983. So I would say Metallica´s first 4 albums. Paradox´s “Product of Imagination” & “Heresy”, Vendetta “Go and Live…Stay and Die” (probably my fave album of all time), and of course “Brain Damage” by the same band. Deathrow´s first 3 releases also had a huge impact on me.

Before your present projects did you play in any other bands?

The Porridgeface was actually a 3 piece band in the beginning. From 1987-1990 we rehearsed a lot…but got drunk all the time. We used to do live shows for fun in that rehearsal room in front of 20 drunken teenagers, ha-ha!

How did it work out that you run one-man projects, create music mainly alone? Does it come from your personality or does it have other reasons?

Well, when The Porridgeface was disbanded in August 1990 I decided to go on my own. Just for fun, of course. I used to write and record songs with only a guitar and my ugly voice. I recorded the stuff on a cassette player. But yeah…I guess I am a lonewolf, too!

Do you have a family (wife, children)? I ask this because seeing your speed and counting your albums I would suppose that you deal only with music every day…

Yes, I have 3 kids and I am married! The music production though doesn´t take so much time that you might believe. I work fast!

Why is it important for you to bring out your music under different band names? Basically you play thrash with all of them and you create all of the songs…

Yeah, seems strange, huh? I want to believe they all sound different from each other though they probably don´t! I think it has to do with the fact that I get bored and want to start something new. Before every album I dream about “to do something different this time”…but it always ends up with more or less melodic thrash!

Why is this dispatch? Are you not afraid of that quantity will be at the expense of quality?

In the first place I do this for myself. I need to create music to keep the demons away so to say. If I am not creating I don´t feel good. I am my worst critic and wouldn´t release stuff that I am not fully pleased with. And the best part is that people don´t have to listen!

Let’s talk about your songwriting method! Do you work parallel on your projects: when an idea comes out from your mind do you decide which drawer will you put it in? Or do you say that you write and record, for example, the songs of the next Psychotrone album, and meanwhile you don’t deal with other projects?

I never work parallel with my projects. If I feel like doing another Psychotrone album I focus on that.

Do you write all of the songs and then record them, or as you have written one song you record it, and then you step to the next one?

I always finish one song before I move to the next. But I always go back to all recordings to check if I can change something to make them better!

When does the lyricist come into the picture? Do you send him the music and ask him to write lyrics to it, or conversely, does he send the lyrics and you write the music to it?

Through the years I worked different lyricists: Peter Nyström, Michael Francisco, Pallav Adhikari, Henrik Davidsson, Vicktor Grimmagard, Dave Fankhauser, Matthew Coombs and Charles Daaboul. I always want the lyrics in front of me when I compose. Just to get inspired. The funny thing with that is that the lyricist may write a song which he consider to be a love song in a slow tempo but I come up with the fastest song ever!

Do you have an own studio where you can record the songs?

Not any longer! I sold off a lot of stuff some years ago. But nowadays you don´t need a studio for 1 million dollars!

How much time do you need to create an album, from the first ideas ‘til the mastering?

Well, it depends on how inspired I am. Let´s say 2 weeks.

How do you decide which will be your next album/project?

Same there, it depends on the mood and if a certain lyricist is available. For example I was talking to Michael “Mettle Angel” Francisco a couple of weeks ago about doing another Age of Nefarious album. He came up with the band name and wrote almost every lyrics on that first album. Even Achim ”Daxx” Hömerlein from Vendetta contributed with lyrics on that album and I have a song left from him that I will probably use. I will send the lyrics to Michael though to see if he can rework it a bit. At the moment, though I am about to finish the 14th Gaslarm album.

Who creates the cover arts of your albums?

I buy the cover arts online! But if anyone who´s reading this are creating cover arts and doesn´t want to have too much money for it, please, get in contact with me!

Which of your albums do you consider the best ones?

Excöriator: The Moaning of Life (the re-recorded version), Gaslarm: Dusk Mother´s Children, Age of Nefarious: The Damage of Nefarious Thinking, Gaslarm: State of Mind, Psychotrone: As Dark Souls Watch, The Porridgeface: Shadows of My Soul. 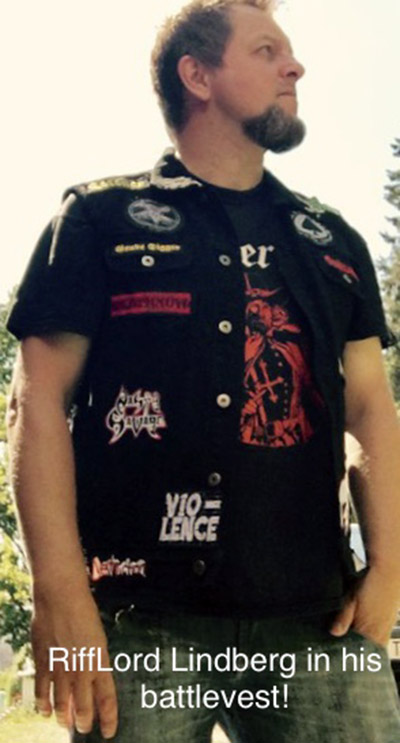 What is your goal with these projects, with this intensive album making?

Not to make money obviously! I love making music that´s it. And I will probably continue until my arms are falling of or if you kill me.

Can it be profitable for you financially or is it a hobby and just spend money on it?

In the beginning I had to pay CD Baby 49 bucks to get my music distributed to Spotify and iTunes and everywhere else. With my pace in making music I would have been living on the street by now! So thank God for Sepulchral Silence Records who’s releasing all the stuff for free! I use to get paid 20 dollars every 2 year or so. For this money I go on eBay to buy me a cool old school metal shirt!

Are you planning to make a contract with a record company?

Let´s put it this way: are you a record company planning to offer me a contract? You can’t find any record company who is willing to put money into a man who won´t ever play live again. I work full time at my work for the last 30 years. I can´t give up that for nothing. I have bills to pay and kids to raise!

And are you planning to release your albums in physical format (vinyl or CD), too?

If a label wants to do it, absolutely! I wish that some label could do it and take all the profit it may gain! For real, I do not need the money I just want to see the music printed in physical format but I can not do it on my own. So if a label/company would like to release something and keep the profit…Go ahead! Just contact me first at gaslarm@outlook.com.

In contrast to one-man projects, how does the team work goes, when you create music as a member/leader of a band?

I really don´t know how it would work nowadays if I was in a real band. But when The Porridgeface was a 3 piece I wrote all the stuff as well.

Have you had any concerts with any of your projects yet? If no, are you planning this?

Nothing planned at all, sorry!

Can you imagine that to change your present practice: making albums in slower tempo or form a “normal” band?

I can´t imagine anything of the above! But, of course, I have been thinking of not doing anything at all several times during the years. Maybe get a new hobby!

The two Psychotrone albums came out only with 3-4 weeks between them. Did you finish them with this difference, too?

I started writing the second album straight away…I believe it was finished 2 weeks after the first was released but I waited for a couple of weeks before I sent it to Sepulchral Silence.

What is the difference between them musically?

As Dark Souls Watch is heavier I think and maybe it is more melodic!

Would you like to become more well-known internationally? If yes, what do you do for it?

I really don´t know. As soon as people figure out it is a one-man band they lose interest. That´s the feeling I get. I can´t do much about it and I do nothing to get well-known either.

What do you message to those Hungarian thrashers who don’t know your albums yet?

If you like 80`s Speed/Thrash music played with passion and love, give it a chance! You can find it all on Spotify and iTunes and places like that. Or download it from any torrent site, it is all there. 🙂 Thank you Thomas and all Rattleheads! 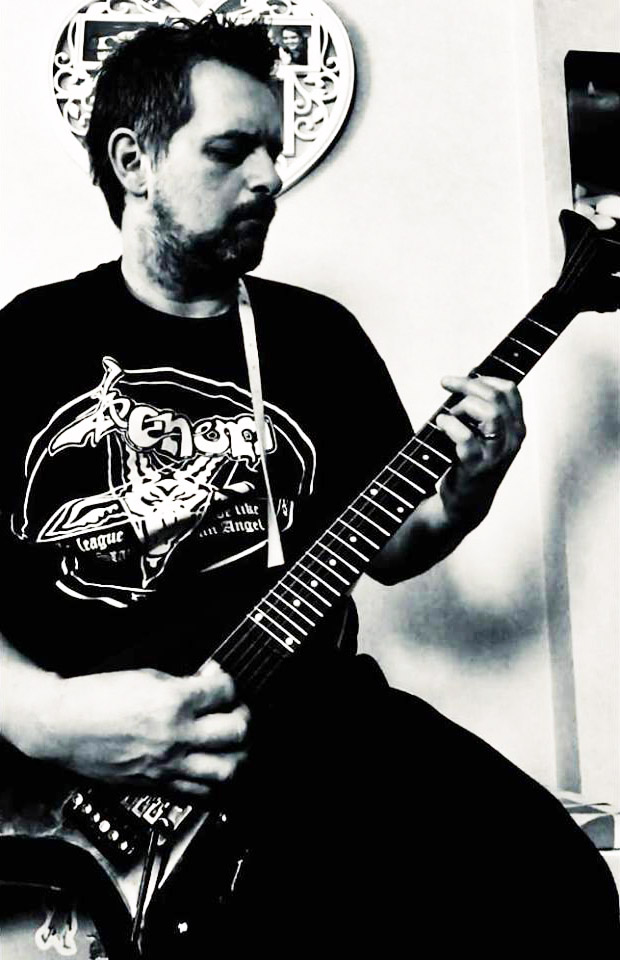