Ruthless is one of those obscure L.A. based bands that were emerged back in 1982. They released an EP (Metal Without Mercy – 1985) a record (Discipline of Steel – 1986), but soon after they disbanded. The band reformed in 2008 and released two albums these days, but in this interview original former drummer Todd Billings told us about the early days of this cult outfit.

Todd, Ruthless was founded in Los Angeles in 1984 by singer Sammy DeJohn, guitarists Kenny McGee and Rollen Legman, bassist Jack Black and you on the drums. Do you still remember, how did you get together?

Yes, Rollen and I answered an ad in a local newspaper for a metal guitar player and a drummer. We auditioned at a little studio in Brea that Sammy and Kenny had, and we brought the name Ruthless with us.

How about your musical experiences and background?

I was trained since about the age of 7 as a classical/jazz drummer. Much to the horror of my long-suffering drum teacher, I became fascinated with metal and hard rock in the mid-70’s.

Did all of you play in any bands prior to Ruthless or was it the very first act for all of you?

We had all played in other bands prior to Ruthless. Oddly enough, Rollen and I played in Ruthless prior to Ruthless. We stole the name from a band that we were in several years prior. The other two original members of Ruthless, Mike Baily and Frank Mone, went on to play in Powertrip, which was the first band to coin the term „speed metal”, and fronted by ex-Angry Samoan lead singer Jeff Dahl.

What do you recall of the early 80’s L. A. scene when a lot of bands started popping up, such as Metallica, Slayer, Marquis De Sade/Savage Grace, Shellshock (later known as Dark Angel), Malice (after they moved from Portland to L.A.), Medusa, Vermin, Abattoir, Armored Saint, Omen etc.? Can you speak detailed about it?

With the exception of Mötley Crüe and Metallica, we played with most of those bands. I distinctly remember Slayer, Savage Grace, Dark Angel, Exodus, Poison, Malice, Abattoir, Armored Saint and Omen. There was overlap with clubs like the Troubadour, Rainbow, Filty McNasty, Gazzari’s, Radio City and Woodstock. We all pretty much knew one another and socialized on a surface level, but not a close basis (unless you count the time Kenny’s fist got close with Leatherwolf’s manager’s face). And of course there was the time we were playing with Stryper at Radio City in July and A/C went out just as the bar ran out of beer… All I can say is that Stryper fans need to learn to fight (LOL).

Would you say that the approach/musical direction of Metallica and Slayer was energic, raw, fresh and new at that time? Did they have a kind of revolutionary approach and influenced a lot of bands later on?

They were certainly energetic, but I don’t know about new. Slayer broke new ground musically. However, the first time I saw Metallica, I predicted that they were nothing more than an „American Motörhead copy band”, and that they would never sell Record One. Goes to show what I know.

Did they have a kind of revolutionary approach and influenced a lot of bands later on?

Yes, they did, but they did not influence us. We were more influenced by Maiden, Priest, Sabbath, Deep Purple, etc. More „classic” metal.

Do you consider them as the forerunners/pioneers of thrash metal?

What about the club scene and fanzines? Which clubs did start opening their doors for metalheads? Which fanzines do you remember from those times?

We didn’t have any experience with fanzines. You were Van Halen and got your face on the cover of Circus or Cream, or you were us and got $hit (lol). Most of the clubs I named above were pretty open to the metal scene at that time.

Do you agree with that the L.A. scene was divided into two parts? There were the glam/hair outfits, such as W.A.S.P., Dokken, Ratt, Mötley Crüe etc. and the brutal thrash ones such as Slayer, Megadeth, Dark Angel etc.?

I’d say it was the glam/hair scene, and that was it. Ruthless was an anomaly at the time: a classic metal band in a glam world.

Would you say that the thrash outfits were overshadowed by the mainstream, hair ones and they got less attention from the fans, press etc.?

Definitely. Not just overshadowed, but kicked to the curb.

Was there a healthy club/underground scene?

Short answer, no. Nothing underground; everything was the clubs I told you about, and you had to fight and claw to get your way into those. 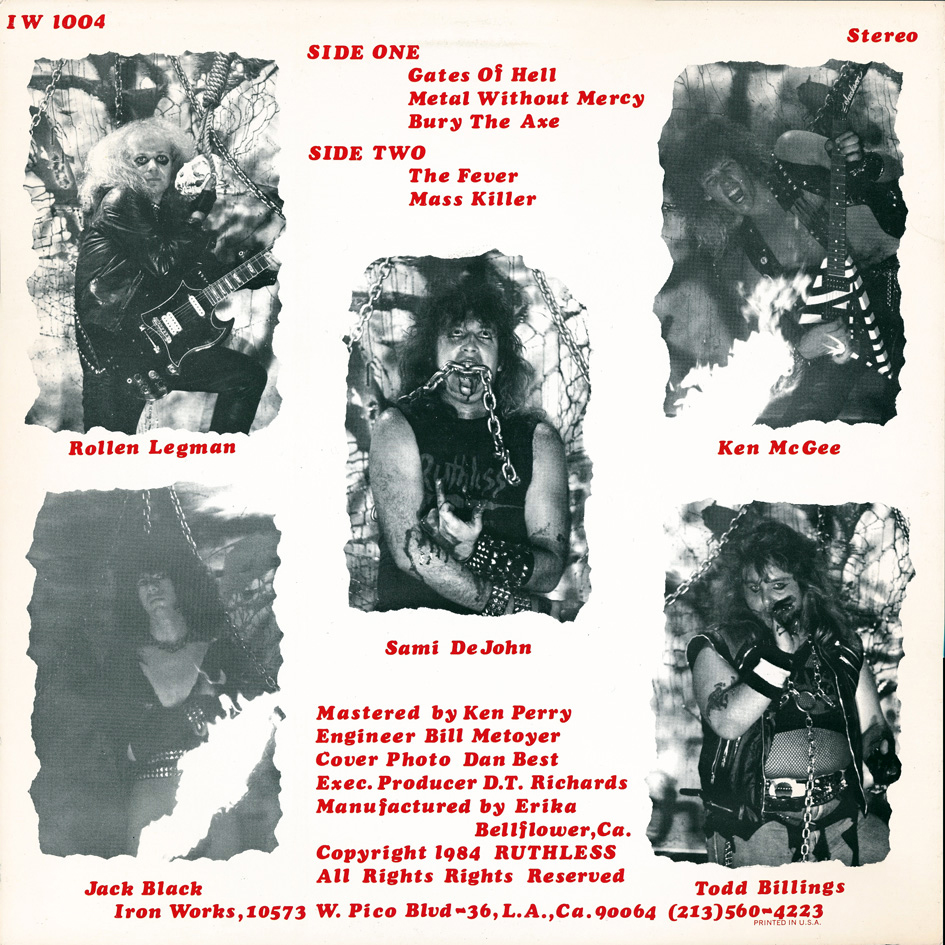 How about your rehearsals? Were you playing mostly covers or did you start writing own material right from the start?

Both. The first song we ever played on stage together was a cover of Black Sabbath. We played a few covers, but only until we had written enough material to have an original set.

The very first four tracks the band ever made were Losing Control, Flaming Eyes, The Executioner and Fear Of Evil. How were they recorded?

Poorly. We were all rookies in the studio, and the management put half our recording budget up their nose. Losing Control came out fairly well, but the rest I don’t like to think about.

Have been these tunes officially released? Did you spread them around through the tapetrading/fanzine network, that had a great importance back in the day?

The only release of these tunes was on Metal without Mercy Plus 6. And if I could, I’d bury it.

What do you think has caused that new metal movement at that time?

There was a „new” metal movement?

You released a single in 1984 The Fever/Mass Killer. Does it mean that you were constantly working on newer material?

I am unaware of any single that was released. Those songs were released on Metal without Mercy. 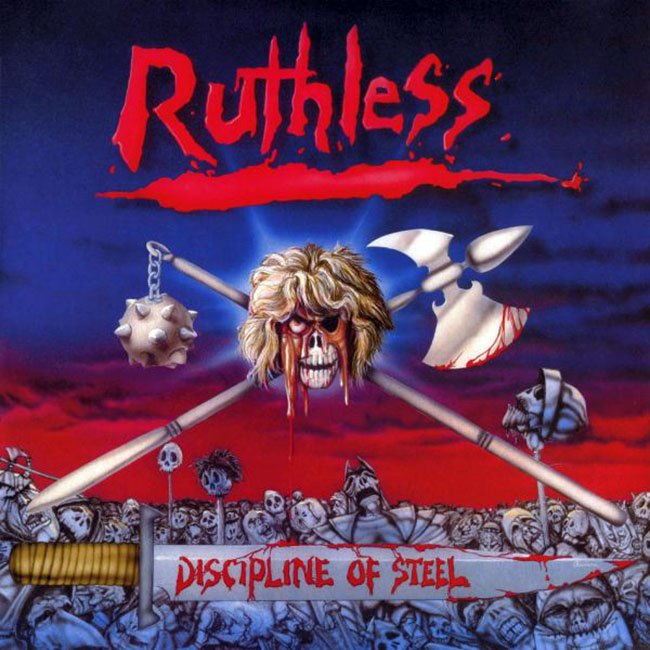 Did you turn into a much heavier, faster direction compared to the early stuff?

Not really, we have always been pretty much classic metal.

Metal without Mercy EP was released by Iron Works. How were you signed by them? Did perhaps other labels also show an interest in the band?

We were signed with them very informally.

You have been playing out all around Southern California, then came the rowdy metal shows where you shared the stage with bands like Slayer, Lizzy Borden, Great White, Stryper, Warlock and Leatherwolf. What do you recall of those gigs?

The riot with Stryper that I spoke about above. It was billed as the „Heaven and Hell Night”. Imagine born-again Christians vs metal fans, in a club without water, beer or A/C in July. My brother, who was at that time a newly-converted born-again Christian, was on the other side of the aisle. My dad punched him out. Fond memories. Stryper, by the way, was drunker than we were.

Your first effort was the Metal Without Mercy EP, that you recorded at the Track Records. How did the recording sessions go?

As smooth as anything can when you are on a limited budget.

Give us, please, some details about the EP considering the songs, production, sound, cover etc!

As far as the production goes, I saw Bill Metoyer (Slayer/Armored Saint) maybe once. Ben Jackson actually produced the EP, on a budget and in a tight timeframe.

Were you satisfied with the end result by the way?

Is any musician ever satisifed with what they put down on a record? Straight answer, HELL NO.

How much support, promotion did you get from the label?

As your popularity grew, radio airplay followed, did it help a lot to make Ruthless bigger and more known? Did it succeed to expand your fanbase?

We got quite a bit of airplay on our local stations. Did it help? I don’t know, but it was fun to hear.

None, I was out of it by that time.

Why and when did you leave the band? Have you ever regret this decision?

I didn’t leave the band. It was not my decision, it was Kenny and Sam’s decision. I was fired because „glam” was the scene back then, and I did not fit in. I am and always will be, and was then, a fucking train wreck in spandex. That is why I was fired, because at the time it didn’t matter how good you could play; it mattered how you looked.

Ruthless reactivated in 2008, from the original line-up Sammy and Ken are here and they released two records. Did you listen to them? Are you still in touch with the former Ruthless members?

We are still friends and we hang out to this day. In fact, we were at the release party for They Rise. I support what they do, and I will love metal until the day I die. I try to make as many of their local club dates as I possibly can.

Todd, thanks a lot for your answers! What are your closing words to finish the interview?

I appreciate you reaching out to me. If you want any additional information or follow up, you can always call me.