Power metal appeared at the same time as thrash in the States. As time went on, thrash became the most popular in the underground, but power metal left its mark on the scene, too. Jag Panzer’s Ample Destruction is definitely one of the best and killer releases considering USPM and guitarist Mark Briody told me about that masterpiece.

Mark, the band was formed in 1981 in Colorado by singer Harry Conklin, you on guitars, bassist John Tetley, and drummer Rick Hilyard. Do you still remember how did you get together? Was it the very first outfit that you were involved in?

You were originally called Tyrant and you recorded two demos. What can you tell us about those early materials? How did they sound like?

To me we were a hybrid of the NWOBHM heavy metal sound and Black Sabbath with Dio. Those were the 2 biggest influences on me personally.

After the release of your second demo the band changed their name to Jag Panzer, but when California based record labels became interested, you realized that there already was a band called Tyrant in California, is that correct?

Seeking inspiration from a book of World War II German armour in the library, you decided to rename yourselves after a slightly easier-to-pronounce version of the Jagdpanzer (Jagd = hunt) tank. Who came up with this name?

We started looking into a band name, so we hit the library. Tanks and other heavy machineries were one of the places we were looking. At the same time, our record company sent in some suggestions. Between the record company list and what we looked at, but came across Jag Panzer (or actually Jagdpanzer).

Did the demos become quickly hot items all around the world? Did you spread them around or were they shopped to attract labels’ interests?

A few record companies were interested, but I don’t think it spread very quickly. Some people liked it, but it wasn’t an underground hit like Metallica was.

At which point did Azra sign the band? Were you the first signings of the label along with Vixen (Hawaii)?

Metal Blade and Azra both offered contracts. Of course in hindsight you could say that Metal Blade would have been much better for the band. But at that time Azra had several releases outside of the metal world plus they offered a full color album cover. Metal Blade was a brand new label and was offering a lower budget black and white cover. Of course Brian Slagel ended up making Metal Blade a world class label, but we didn’t know that back then. Azra was good to us though they didn’t interfere with our music at all.

The biggest labels at the time were the European ones – Music For Nations, Neat, etc. None of them had any interest in Jag Panzer. I wrote them often and was always turned down.

In 1983 you released a single (Death Row) and an EP. Do you think that the EP is very NWOBHM influenced with a tone of its own, this was somewhat of a precursor to what Ample Destruction would become?

I was the main music songwriter on the EP (Harry did the vocals and lyrics) and I think the NWOBHM influence on my writing is very apparent.

Is the general feel to the music is rather dark and sometimes evil thanks to the production, which is extremely top notch for an EP?

The production is just what we could afford from the local studio. I’m not complaining at all, I think Tom did a fantastic job on our albums. I’m just saying that we didn’t seek out a special studio or sound for the early records. We simply went into our local record studio and recorded.

A fifth song, Towers of Darkness was recorded during these sessions but not included on the original release. Why didn’t make this tune on the material?

That was the first song we ever recorded. It was recorded much earlier than the EP songs. I didn’t feel that it was as strong as the newer songs that were on the EP. We actually did about 4 other songs in between „Tower” and the EP songs.

The EP was supposed to include the track The Crucifix, but you did not own an acoustic guitar and could not find one to borrow (as you had, for the second 1981 demo), so the track was not recorded, was it?

That is correct. We were a very poor band, so we typically had to borrow some equipment to record. I was promised an acoustic from the local music store, but they ended up selling it right before I needed it. 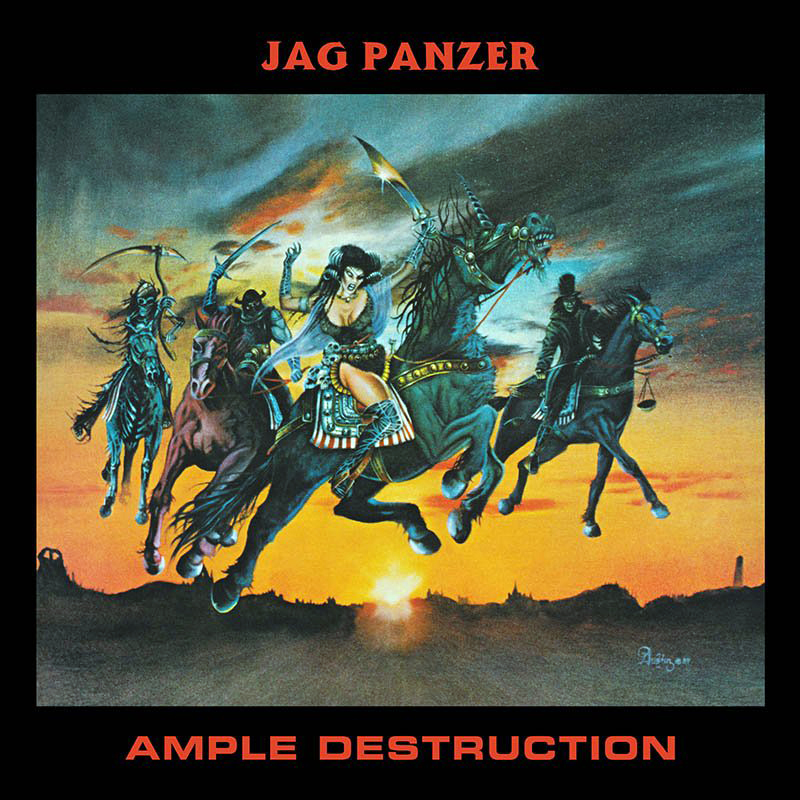 When and how was recruited second guitarist Joey Tafolla? How did he get in the picture considering he was from San Diego?

He was from Orange County, not really San Diego. We had placed an ad for a lead guitarist and a friend of his answered the ad. His friend ended up not being able to make the audition, so Joey showed up instead.

Did he also take part in the songwriting or was the material for Ample Destruction ready yet, when Joey joined the band?

Joey took part in a big way on the Ample songwriting. Some of the classic riffs on the album were his creation. He’s a great songwriter.

You entered the Startsong Studios, Colorado Springs, to cut your debut album. How did the recording sessions go?

It was in the middle of winter, so it was very cold. Startsong was in the engineers’ basement and it was heated by a wood stove. So we all collected wood before every recording session. It was fun though, but we didn’t have much time.

Did you have a decent budget?

No, it was tiny. Thankfully Startsong had some very good prices. With our budget we only could afford 2 days at a big expensive studio.

Did the band definitely mature, musically helped a lot by the addition of Joey Taffola?

Yes. He’s a very skilled musician, so he helped take us to the next level. 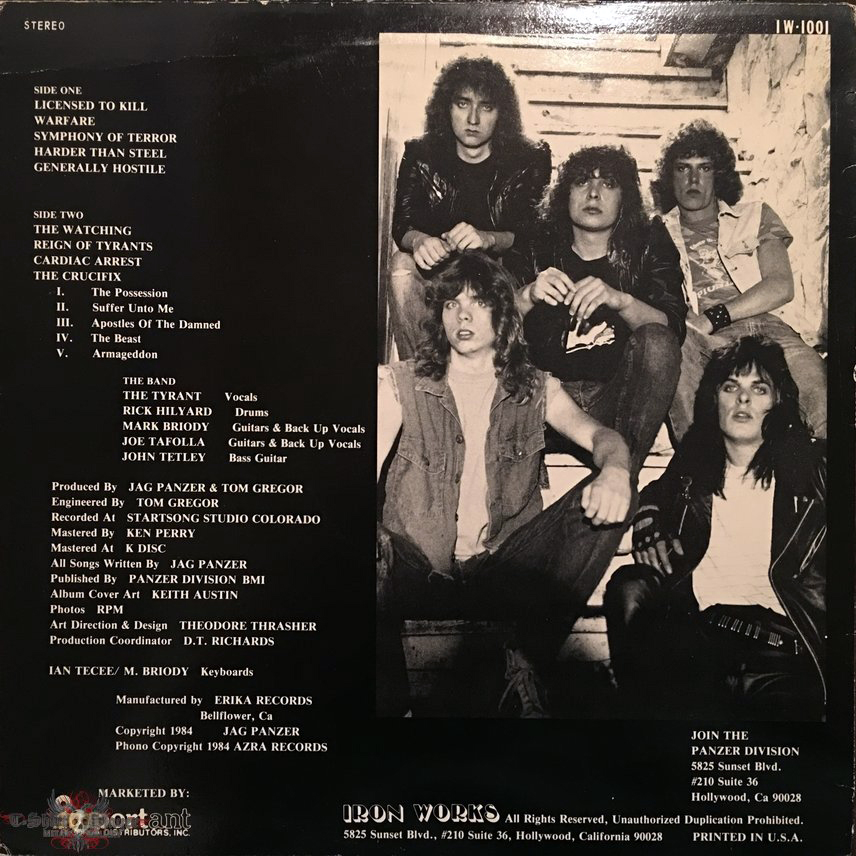 How do you view that Jag Panzer took a straightforward, NWOBHM influenced approach, with thick, chugging riffs and fleet fingered guitar harmonies you took your flair to it and Harry Conklin showed off his powerful voice reminiscent of John Cyriis and Bruce Dickinson?

I would agree, that’s a good comparison. Except I think that Harry sounds nothing like John Cyriis. I respect Agent Steel, but I didn’t listen to them until long after Ample was recorded.

Are the riffs aggressive and never let up? Did the bass provides awesome support for the killer riffage and pumps right through?

We just tried to write and play good metal songs. Songs that were a little more intense then what was offered in the U.S.

It’s difficult to pick out a highlight track as they all flow together in one, singular metalstorm…

It’s tough for me to pick one. I’d probably pick „Symphony of Terror”, but by only a slight margain.

I don’t think so, but to be honest it’s difficult for me to compare our music against other bands. To me the 2 classic U.S. metal records are Savatage „Sirens” and the Warlord „Deliver Us” EP.

Do you agree with that Ample Destruction is a simply astonishing debut which defined an entire genre, power metal, defined the power metal sound, that so many bands adopted after you?

I actually hear almost no bands say they were influenced by Jag Panzer. Maybe just one or two over the years, but that’s it. I think Ample is a great album and I’m very proud of it, but I don’t think it defined a sound.

Would you say that US power metal represented an evolutionary step and reaction to NWOBHM, the base and foundation are the same, but everything is exaggerated and taken to the next level?

We didn’t set out to exaggerate anything from the NWOBHM. For me, we were just a NWOBHM influenced band who set out to define our own sound.

What were the shows, tours in support of the record?

There were only a few shows in our local area. We had no money to travel anywhere. We were offered a gig once in California, but it was an opening slot at a bar and it did not pay. It would have cost us $1500 to do that gig. We had no money. It was a struggle coming up with the $100 a month for our rehearsal studio rent.

Why did Harry and Rick leave the band around ’85?

Rick was more interested in a career (the band never made any money). He had also just gotten married. Harry had a chance to join Riot. We were all huge Riot fans so we were happy for him.

You recorded the Demo 1985, the Demo 1986 and the Shadow Thief demo (1986), you had several line up changes as well (including singer Chris Cronk). Can you tell us more about it?

How do you explain, that Jag Panzer missed their chance at a bigger heyday? What did lack the band to become bigger?

Mark, thanks a lot for your answers! How would you to end this feature?

Thank you for the questions and thanks to every one for listening!