The second wave of the German thrash movement brought a lot of bands to the table. It was an incredible fertile period for that genre, including bands such as Deathrow, Violent Force, Exumer etc. all tried to make a name for themselves. Protector from Wolfsburg belonged also to this wave, and I think they were the roughest and most brutal from all of them. Their second album Urm the Mad became an underground classic and singer Martin Missy gave me his answers regarding my questions about that record.

So Martin, your debut album Golem was released on August 29th 1988. How was it received back in the day? Did you manage to draw the fan’s attention to the band?

We already had recevied some attention with our EP Misanthropy in 1987, but Golem was yet another step forward for us. Until today it seems to be our favourite recording amongst our fans (together with A Shedding of Skin).

How much support did your label Atom H give the band? Did they try to push the band forward?

They didn’t do especially much promotion for us as far as I can remember. Some ads in metal magazines and stuff like that, but concerts we still mostly had to organize ourselves. But I can understand that, because Atom H was quite a small label.

Did you tour a lot in support of Golem?

No. We just played a couple of shows, that’s all.

On April 11th 1989 you recorded a show in Bad Wörishofen. What do you recall of that gig? Was it recorded and distributed for the fans later on?

I wasn’t singing in Protector at the time, so I don’t know anything about this recording more than that it exists.

Do you still remember when did you start working on the new material?

Not exactly, but most of the songs must have been written in early 1989, when I was out of the band (and Olly Wiebel did the Protector/Wehrmacht tour and the big gig in Katowice), because I remember that I sat at home during the summer of 1989 and wrote the lyrics to the songs that ended up on Urm the Mad.

How were the songs penned compared to Golem?

Urm the Mad is a „special” album regarding the songs, which are more complex, as well as the sound, which was also not as on any Protector album before (or after for that matter). I would say Golem is in that way easier to listen to than Urm the Mad.

During August 1989 you entered the Phoenix Studios, Bochum to cut your new album Urm the Mad. Did you have a decent budget?

I have to admit that I don’t know how much money the production did cost. We were in the Phoenix studio for over a week, and the thing that was great, was that there was an apartment on top of the studio, where we stayed during the recording. I also remember that we didn’t have a lot of money to buy food for. I was unemployed at the time and was happy that we got some German Mark from the record company to buy food for.

As far as I remember, it all went very smooth and without any complications.

Although the line-up was the same as on the previous album, you had been out between March and early summer 1989, so you wrote the lyrics to all the songs in a very short period of time. What was the reason of it?

In February of 1989 I had started to get panic attacks, which was caused by smoking hashish. I was not able to stand on stage, and had to use all my psychological strengh to get my life back on track. It was a tough time, probably the toughest of my life. 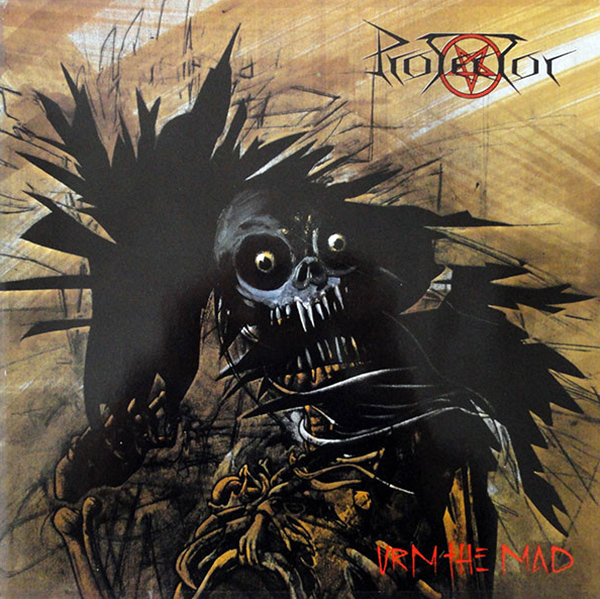 Is it correct that compared to Golem a heavy metal comic gave the inspiration considering the title and concept of the album?

That’s correct. When we recorded Golem in the Phoenix studio in 1988, I found a couple of „heavy metal” comic magazines in the appartment, where we stayed during the recording. In one of the comics was the story of Urm the Mad (by Philippe Druillet). I liked the story, so I used it as an inspiration for the lyrics to the main song for the next album.

What was the story about?

It’s about a deformed person called Urm, who is the son of a prince and who goes on a quest to fight the opressors of the country, if I remember right.

What is present on this record is notably less typically thrashy than what came before; a frequent use of slower tempos, even murkier production and truly sick vocals from you…

Yeah, as I said earlier: the songs on Urm the Mad are quite different from what we had done before. You could call it our „experimental album”, hahaha.

Instead of following a thrashier path, on this record you lumbered towards some odd primordial death-like sound, you showed your increased leanings towards death metal. Do you agree with it?

That could be correct. Our goal on this record was not to become more death metal though, but just to make really brutal songs, regardless the „drawer” the album would be put in after its release.

Would you say that every song on this album with the exception of Nothing Has Changed has fast moments, slowing down for a short amount of time only to speed up again?

I haven’t listened to the record for a while, but I would say that that sounds about right, yes.

Did it become more straight foreward and to-the-point then Golem?

No, I would say on the contrary: Golem is more straight forward than Urm the Mad.

Though there are still many thrashing moments here, Urm The Mad is slower and more plodding than the fairly energetic Golem; this combined with a rougher production and deep growling vocals gives the album an absolutely depressive and hopeless feel. How do you explain this?

I don’t know. That was just how the songs turned out, when Hansi (and Michael) wrote them. Regarding the production we always relied on the producer at the time, and trusted him to do „the right thing”.

Is Urm the Mad famous for its heavy, noisy, dirty sound, for its raw production that makes the music all the more evil and menacing?

I would say its a combination of the sound and the „special/experimental” songs.

Protector’s special blend of thrash and death metal has always set you apart from your compatriots and even inspired German metal magazine Rock Hard to declare Protector to be Germany’s hardest band. Is it correct?

I can’t remember reading that statement from Rock Hard, but if you say so, I guess they must have said it. I don’t know if we were the hardest band in Germany though. There were a couple of other, aggressive and brutal bands out there at the same time.

Did they take it seriously or was it a kind of ironic description?

Is the album grim, dark and desperate, but nonetheless brutal and extreme?

I would say yes.

What were the general responses to Urm the Mad? Were all of you satisfied with the end result?

As far as I can remember, we were satisfied with the result, but the press and fans didn’t like it as much as our earlier outputs.

How about shows/tours in support of the album?

There was no official „Urm the Mad tour”, just a couple of single shows.

In your opinion, was Protector’s contribution to the then-proliferating Teutonic thrash mainly recognized within the underground scene, and the band’s expectations for Urm the Mad were not really met?

We have always been an underground band, and in the underground, I think we were (and still are) quite recognized/respected.

Would Protector have been bigger if you would have got more support from magazines, fanzines?

I think the main problem was that we were „too late”. Protector should have started in 1983 or 1984, and put out the first EP/LP in 1985, then we maybe would have become more famous. When we released the first EP Misanthropy in 1987, the competition from other brutal thrash/death metal bands already was too big. 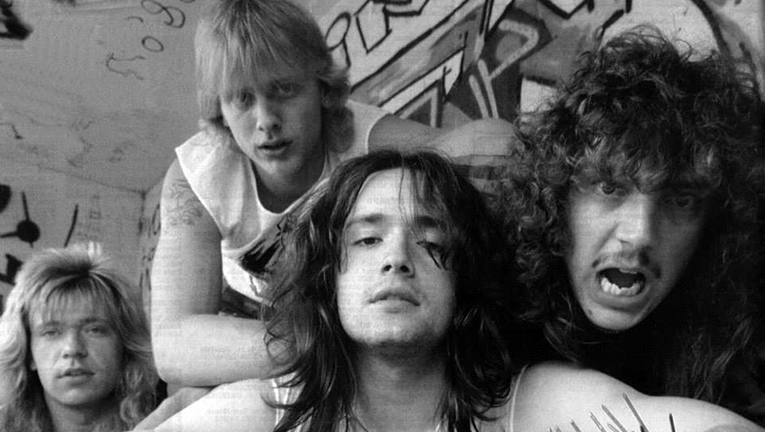 2011 is marked the rebirth of Protector, when you reformed the band with Swedish musicians (the line-up is since then unchanged). Was your goal to keep the band’s name alive? Do you think that Protector have – a kind of – raison d’etre only with you?

The band actually already started out in 2006 as a „Protector cover band” called Martin Missy and the Protectors. In 2011 we decided to write new songs, and to release them under the name Protector. I talked to Hansi Müller about it, and he said that he thought it was a good idea. I am at the moment the only member of Protector from back in the day, that still active and wants to keep the band alive. If I wouldn’t do it, there would be no Protector anymore.

Are you still nowadays in touch with Hansi Müller and Ede Belichmeier? What are they doing these days?

Yes, I’m in contact with them. We have contact by e-mail and meet now and then and talk when I visit Wolfsburg, where they still live.

A brandnew album will be released this year. Could you tell us any words about it?

The album’s title is Summon the Hordes, and it will be released on the 26th of April 2019 by High Roller Records. The music was recorded in the autumn of 2018 in Berlin with Harris Johns, and I recorded the vocals in Stockholm.

Your first gig in Hungary will be in October…

Yes, we will play in Budapest on the 1st of October, and we are really looking forward to this a lot!

Martin, thanks a lot for your answers! Share with us your final words and thoughts at the end of this interview!

Thank you for doing this interview with me and stay metal! 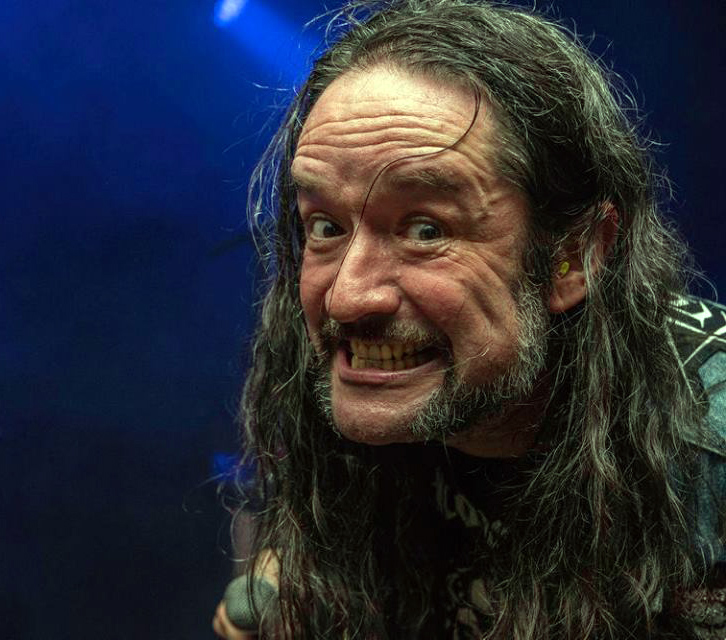