Andy Beresky talks about the new album of Palace In Thunderland

Springfield-based (Massachussets, US) psychedelic metal band Palace in Thunderland released its third LP called The King of the Empty Aeon a month ago. Beside this, a few more challenging and exciting things happened/happen to them: they lost their drummer, another new stuff will come out this year, and they have started to write the songs of the next album. I asked singer-guitarist Andy Beresky about all of this.

Andy, last time you said that you want to create the best Palace In Thunderland album with The King of the Empty Aeon. Did you succeed?

I really believe that we did – I feel very confident that this is our best so far. We started with a rough idea, a couple solid songs, some good riffs and some awesome jams. We allowed ourselves complete artistic freedom and really focused on breaking away from genre limitations and cliches. And I think that the results speak for themselves, it’s a real cohesive sonic statement.

It’s a concept album. Could you shortly talk about its story?

Well, it’s the story of a future Buddha, one growing up in our modern era. The historic Buddha set out on his quest to understand and end suffering after his father tried to mask his reality in a world of pure pleasure, to hide the existence of suffering from him. Once he encountered sickness, old age and death, he was stunned, and it motivated him to leave all the pleasures behind and seek answers.

In our world today, that’s just not a possible scenario. Social media, the constant news cycle – we hear about suffering 24/7. So I wrote a story about a young person experiencing suffering first hand, from a young age. The main character experiences death, loss, love and heartbreak. They go through adolescence and their teenage years trying out different things and lifestyles to try to cope, then ultimately rejecting them. They see how religion and politics have become corrupted and offer no real solutions, how technology has brought us to an unsustainable lifestyle and the brink of destruction.

Ultimately, they end on a pretty dark place chanting “all my chances fall apart” over and over. And…naturally there will be a part two, where the character figures out what they have to do to make sense of it all, picks themselves back up and finds their path, ultimately actualizing their role as The Maitreya.

What does the album title mean? What kind of message is behind it?

It’s from a passage in The Mountains and Waters Sutra written by Eihei Dogen, a Japanese Sōtō Zen monk, philosopher and poet who mentions The King of the Empty Aeon. That’s all I’m going to say on that. If you want to know more, read the Mountains and Waters Sutra. It’s very playful, insightful and contains a lot of paradox. I love Dogen’s writing.

Who created the splendid cover art? What does it represent from the story, from your concept?

David Paul Seymour created the artwork, and he did do a great job! Well…it represents a few things. We wanted it to be a bit like Zen Arcade, thus the junkyard full of electronics and appliances, and the figure became less serene and more animalistic as we developed the concept together. Kind of the whole Yeats Second Coming idea: “What rough beast slouches towards Bethlehem to be born?”

I thought up the electrical outlet mask later on, to symbolize how we’ve got our faces plugged into and distracted by something electronic all day long, and that would be a significant challenge for a modern Buddha to overcome. The idea is that these are the things The Maitreya must strip away in order to achieve enlightenment. Then we had David put the traditional Palace In Thunderland crown on the head!

The album got the fourth position on the list of Doomcharts.com in February. Is it a big deal for you?

Well…yes! While ultimately we weren’t making this album for recognition, it still feels good to be recognized. We took a very different approach with this album, and that’s always a bit of a risk. It’s rewarding to see that this paid off. It’s not a safe album with subject matter about weed, wizards, goats and the devil – It’s designed to make the listener actually think and more importantly, feel. We focused heavily on Bruce Lee’s concept of emotional content being the key to effective strikes. We wanted potent emotional content in the writing, performances, and production. I think that’s the key to harnessing the feeling of immediacy in listeners, and the immediate recognition the album has received speaks to this. 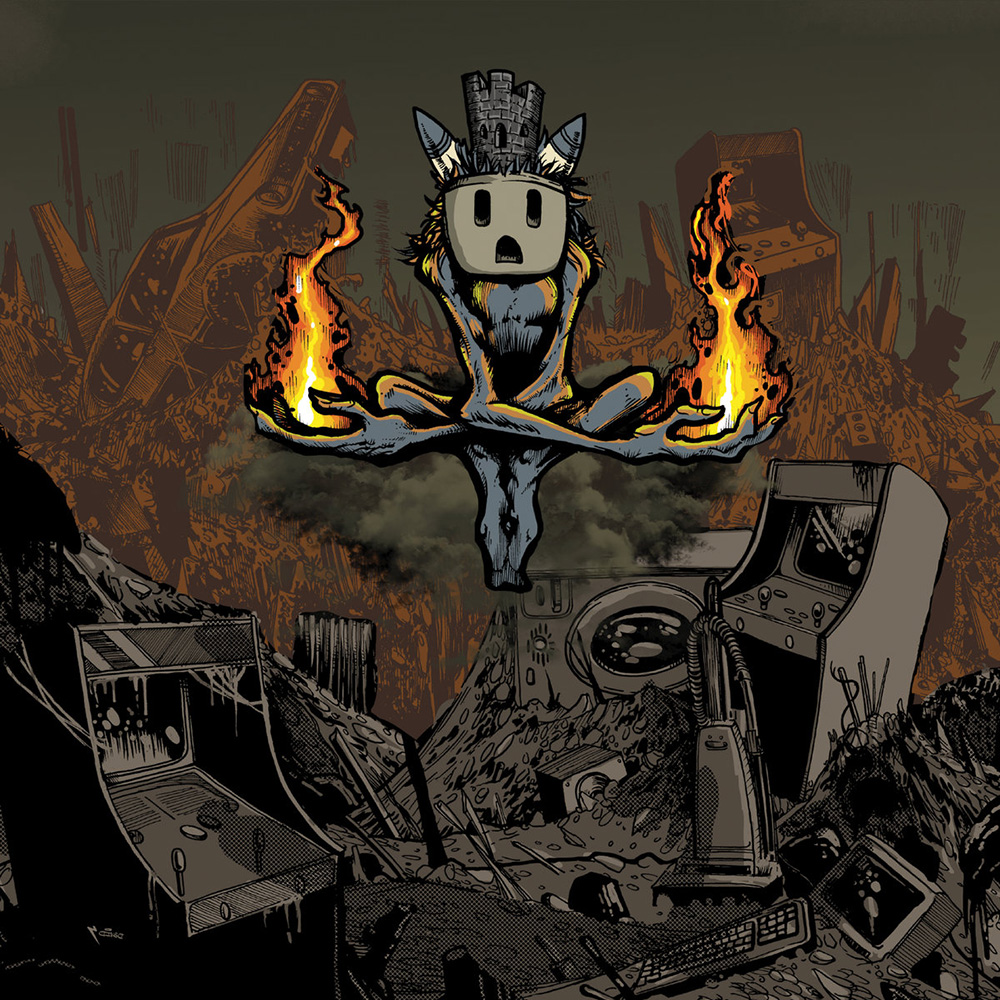 Earlier you wrote about yourselves that you are an invisible band. You seem to have started to step out to the light now. At first, the new album is distributed by Fuzzdoom Records. How big company is it and how can they help you?

Calling ourselves an invisible band is a bit of a joke – again, it’s made to make people think: “Well, what exactly do they mean by that?” Some of best jokes have a grain of truth, and yes, we’ve traditionally flown under most people’s radar.

Fuzzdoom is a smaller label, and they’re doing exactly what we need: working with us to make a proper release and get our music out there a bit more. It’s their efforts that largely have pushed the release into the light.

On the other hand, you made a video for one of the best songs of the album, Vicarious…

Yes, we did!! I really like how the video came out, again. It shows different slices of life, the planet and the universe, the microcosm and macrocosm, and really makes me think about where we as human beings fit into it all. It’s “psychedelic” in the mind expanding sense, yet doesn’t rely on cliche “trippy” imagery.

What happened to your drummer Matt Neto? Is he not in the band anymore?

Well, that’s a difficult subject and a very personal one. I’m trying to think of a way to address this respectfully and gracefully. I think it’s tough being in these sorts of bands, playing a type of music that isn’t really popular and lingering in semi-obscurity. We’ve been doing this a long time. It takes a real toll on us all, trying to balance our work and personal lives while making the music we love. We’d gone through some changes, lost our practice space, relocated, navigated some personal struggles. Sometimes something has to give, I guess, and it ended up being Matt. We thought we were back on track again, that things were going in the right direction again. Matt didn’t agree and he suddenly left.

Did you record the songs of the new album still with him?

Yes, he played drums and sang on the entire album. He’ll be missed…

Are you looking for his successor?

We are. It hasn’t been an easy search.

What about the four-song EP that you talked about last time and planned to release in 2018?

That will be out this year as a split 12” with the The W Likes. Ripple Music is putting it out as the last chapter in their The Second Coming of the Heavy series. We’re super stoked, it’s gonna be radical!

As I know, you are working on an extended instrumental song showcasing improvisation. How long track should we imagine?

25 minutes? I’m hoping that we can start working on that more soon, we did play it live once. It’s a cool track.

When and in what format would you like to release it?

I have no idea…

I read that you already work on the songs of the new album. Will it be also a concept album, the sequence of The King of the Empty Aeon?

That’s correct. It’ll utilize some of the same musical themes and a similar structure. It continues the storyline and answers some of the questions we pose with The King of the Empty Aeon. So far, the songs and themes are strong, and it certainly won’t be a carbon copy of its predecessor. So far it’s more riffy and meaty. We’ll see where it ends up though! 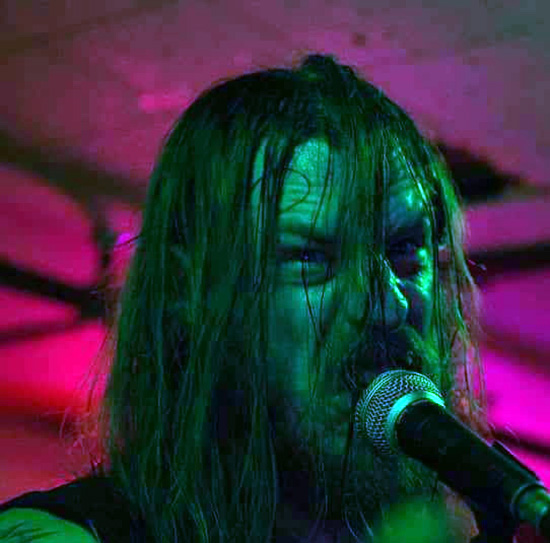 It may be too early to talk about it but when do you plan to release this stuff?

We just don’t know, too much is up in the air…

What about the concerts: how full is your agenda?

We have no shows booked. It’s tough with no drummer.

Do you have any chance to play gigs in Europe in the close future?

Tough to say. Europe is really competitive for American bands. It really depends on if we get any offers, and if the timing is right.

How satisfied are you with the things what happened with the band in the recent period?

Well, I’m certainly satisfied with how the album came out and how it’s received a warm welcome. Am I satisfied that we’re basically unable to rehearse with a drummer? No…and again, I’m the sort who is never truly satisfied. We’ll make the best of it. As much as momentum can be important in terms of the creative process, we’ve taken breaks before and it’s been really helpful. We’ll start working on that instrumental track soon, as the drums are already recorded.

How could you recommend The King of the Empty Aeon to the Hungarian listeners?

Well…think of this album as a piece of the Palace mythology. Hungarian culture is rich with imaginative mythology. The King of the Empty Aeon is a sort of taltos, a person endowed with certain features who rises up when the people need them the most. If you’re into psychedelic metal with a cool mythical storyline, this could certainly be for you! Sure, it’s no Son of the White Mare (Fehérlófia, in Hungarian), and it’s an attempt at something like that, just more modern. 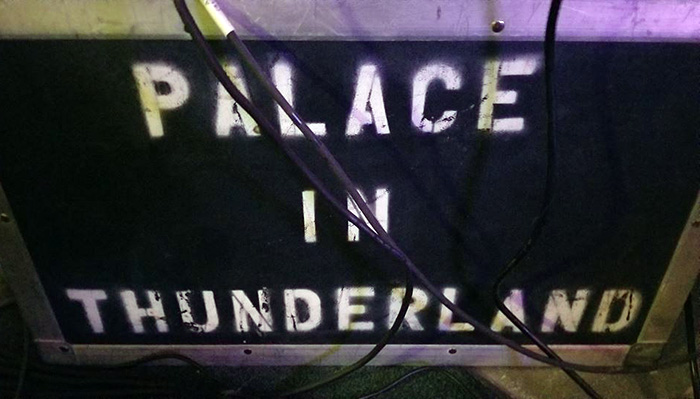