On the Gods of Grind tour played Mark Ramsay Wharton on the drums. Why did Mike Smail leave the band? Did you part ways with him on a friendly term?

Mike was only ever in the band to play on Forest, there was never any possibility of him joining permanently. He had Penance and at that point we could never have afforded to fly him back and forth from the US.

What about Mark’s musical background?

Me and Mark were both in a thrash band called Acid Reign, so when the drumming job came up for Cathedral he was by far the best candidate.

Did he have enough time to learn the set? Was he familiar with Cathedral?

He had loads of time and I gave him a copy of Forest to listen to, then he came down to Coventry to rehearse and was straight in….although he says he was never officially asked to be in the band, everyone just assumed in was a done deal. He was by far the best man for the job, which I think he proved on the Soul Sacrifice EP.

Your next release was the Soul Sacrifice EP. Were those songs written during the Forest of Equilibrium sessions or were they brandnew tunes?

They were new, two from Gaz, one from me and one from Griff. To be honest it is probably still my favourite Cathedral release, that’s when we were all on the same page.

Do you think that the band foreshadowed their new direction, a bit faster doom metal with plenty of groove?

We just wrote stuff based on other bands we liked, or sometimes writing stuff to mess with peoples heads, haha. We never really thought in such grand terms.

During the end of 1992 you played on the Rock Hard X-mas Festival Pt. II along with Crowbar, The Obsessed, Napalm Death and Trouble. What do you recall of those shows?

Can’t remember…but I do have very vivid memories of the New Year’s Eve show…honestly I don’t think any of us were sober for very long on that tour so my memory is kind of fuzzy, haha. It really should have been professionally filmed, would have been great.

When and why did Mark Griffiths quit? Did the still play on the X-Mas festival dates or…?

He quit after the US tour with Carcass and Napalm. He had just become disillusioned with the direction things were taking.

After his departure he went on to form Year Zero and he also played on Blackstar’s Barbed Wire Soul, correct?

Is he still active in any groups these days?

He plays in a band called Arkazum which everyone should look up immediately.

At which point did Columbia Records get in the picture being your new label? Was it surprising for you?

Pantera had just broke big, and a lot of big labels were looking for heavier stuff. Columbia decided to go for Earache’s bands, but I think we were one of the first to be approached, I think Godflesh, too…not sure. Apparently Autumn Twilight was a favourite of Columbia.

What kind of contract did they offer you?

One that enabled us to do the US tour, haha.

Did they promise you a lot of support? Did they give you artistic freedom?

Labels rarely promise anything, and if they do it’s not worth the paper it’s printed on. Although we would have objected strongly to interference with songwriting on Ethereal that’s exactly what happened….we found we had to compromise to get the job done. 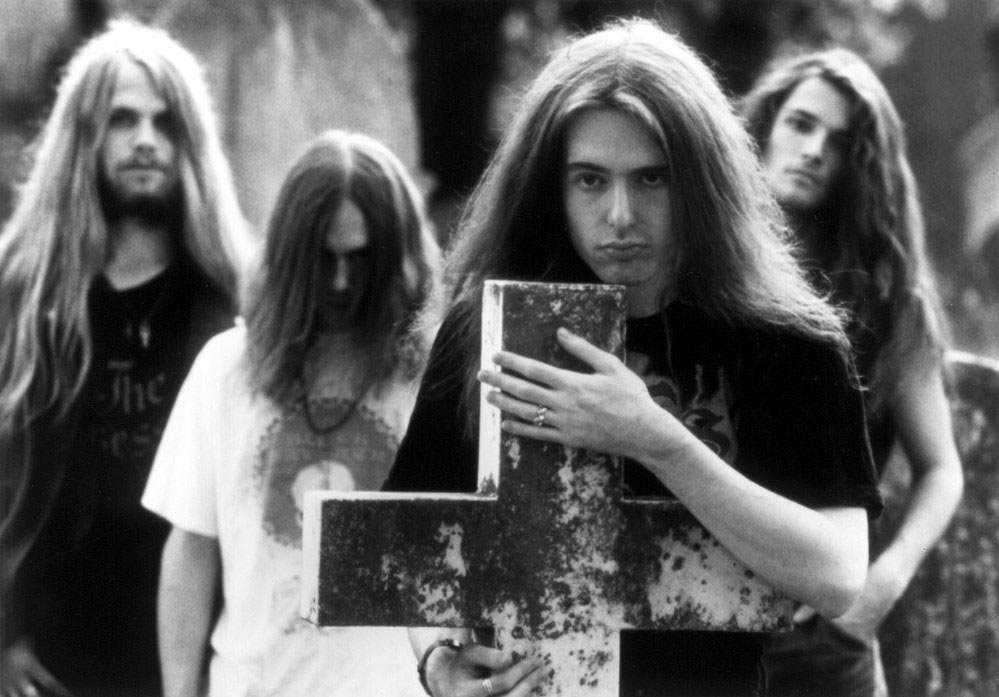 You released two singles, Grim Luxuria and Ride. Was it the idea of the label to promote the album? What kind of goals did these materials serve?

It was the label’s idea, I think they were just cheap promo things they were certainly never presented to us as serious attempts to enter the charts or anything.

Another single Twylight Songs saw also the light. Was the single really used as part of a marketing tool during the period when Columbia Records and Earache Records worked together?

I think that was issued through an independent…I love that single.

Is it correct that during the distribution of the Cutting Through Columbia Hard Music Promo, a note came with it stating that if you liked Cathedral’s track Autumn Twilight enough to purchase the Soul Sacrifice EP and mailed the UPC label to Columbia/Earache, they would send you a special gift and this 7” single was that gift?

I have absolutely no idea….you know more than I do!

You entered the Manor Studios, Oxford to record your second album titled The Ethreal Mirror. What about the recording sessions?

It was just insane to be there, a huge mansion to live in (haunted, too) and me and Gaz were going mad cos Sabbath had recorded there, Doz (Lee Dorrian) was chuffed cos the Sex Pistols had been there…it was a bit surreal. I remember us being out on the piss in Cov just before we were taken over there. Mental.

Would you say that this time you took part better in the songwriting process? You co-wrote five songs…

I can’t remember it all…it wasn’t a conscious thing we were just writing together a lot more because of all the rehearsing, for Forest and Soul we would just put riffs on tapes seperately and send our ideas to each other. We lived quite far away from each other.

Do you agree with that in a period of musical and personal transition, Cathedral strip off their extreme metal tendencies and deliver a masterful piece of work?

I don’t think we completely got rid of the extreme stuff…Phantasmagoria has some cool stuff in there. To be fair we were just being honest I think…we were all in a very bad emotional space when we did Forest, but by the time we got to Ethereal we were having fun and I think that shows in the recording.

Was it a logical step, a conscious decision moving into a more melodic direction or was it a natural progression? Were you definitely more inclined to rock out than to doom?

A natural thing I’d say, we never really sat down and planned much back then.

Did the album mark a big musical change for Cathedral? Did you turn into a more commercial direction?

We didn’t think of it as commercial, in fact we thought everyone would hate it!

The interjection of a lot more NWOBHM and a more traditional metal writing style certainly was no disappointment, wasn’t it?

I don’t see a lot of NWOBHM in there except maybe Fountain…but maybe I’m too close to the whole thing. I’ve said this before but I don’t think anyone should have been surprised after Soul Sacrifice.

With The Ethereal Mirror Cathedral took a less extreme route than was prevalent on Forest of Equilibrium. In your opinion, did the band manage to keep this release varying in moods throughout the entire album? Is the mood definitely lighter and brighter for the most part?

On the surface I suppose it is lighter, but if you delve a little deeper you might find a troubled band about to enter a bad part of their career while being hassled by an overpaid american producer whilst staying in a haunted house. And people wondered why we were always drunk, haha.

How do you view that Lee Dorrian changes his singing to some lowed clean voice and the instrumentation is heavier and more experimental?

That’s just how it evolved, there was never any decision to do it. Some of the songwriting was cleaner so Doz had to change his approach in parts, and I thought he did bloody great.

In 1993 further British doom records were released, such as Serenades (Anathema), Turn Loose the Swans (My Dying Bride) and Icon (Paradise Lost). Was this period the heyday of British doom metal?

In my opinion the heyday was earlier: Forest, Lost Paradise/Gothic etc.

Your last works with Cathedral were the After Forever split with Biohazard, the Statik Majik and the Cosmic Requiem EP. Sum up, please, these materials! Can you give us any details regarding on these stuffs?

I had no idea we did a Biohazard split, that’s cool. I was very unhappy on Statik, I was being nudged out as far as songwriting was concerned and was even being told what to play in the studio, whereas on earlier stuff it was all a product of all of our ideas. It’s still not easy stuff to listen to for me.

Cathedral’s career is separated mainly in two different musical periods: during the first years of existence (1989-1991) the band played a slow and ultra-heavy style of music, with influences ranging from traditional doom metal to the extreme metal scene. While the second phase (1992-2013) found Cathedral experimenting with new sounds while adopting characteristics of 70’s metal and inducing touches of progressive and psychedelic rock. How do you explain this?

It’s a lot simpler, we all came from more extreme music than doom…actually I’m not sure I like that wording but you know what I mean…what came after was just a natural progression into the band that Cathedral ultimately became…which is basically Hopkins. If you had to introduce someone to Cathedral, you wouldn’t play them Serpent Eve, you put Hopkins on.

When did you decide to leave the band? What kind of reasons did lead to your departure at all?

I left after the Rob Halford’s Fight tour…I’d told them I wanted out before that though but I don’t think it felt like a done deal til the end…maybe they thought I’d change my mind, and to be honest so did I, I’d spent three years with these guys. But a lot of stuff had gone on, and one in particular I couldn’t get out of my mind. It was time to go, but it did break my heart a bit although initially it was a relief to be off tour for a few weeks, haha.

Did you stay in touch with them later on? Did you perhaps follow Cathedral’s career?

Not intentionally, but I’d usually get a phone call when they were in town, and I still do. They were and are a big part of my life, Doz in particular. I used to hang out with him when Cathedral weren’t rehearsing or anything, he’s just a nice guy to be around.

What are you doing these days? Are you still in the metal scene or did you get off from it?

Can you tell us about your musical involvements after you left Cathedral?

I tried to get a rock band together in the vein of Deep Purple/Free but I could never find a good enough singer.

Adam, thanks a lot for your answers! How would you finish this extensive feature? What are your last thoughts, comments for our readers?

I would just say thank you for your questions. I certainly never thought all those years ago that I’d be sat here in 2018 and people would still care about that stuff. I hope my answers haven’t been too boring, and if anyone wants to say hi I’m on Facebook and all that, come and have a natter. Thank you!