Nahaya is a melodic thrash metal band from San Antonio, Texas. Their first release is a four song EP called Transcendence that came out in July this year. I like the stuff so I wanted to know more about the band. Vocalist Carl Elfin Ford, bassist Semir Özerkan, guitarists Daniel Abbott and Ryan Peters were so kind as to answer my questions.

Are you currently four or five in the band? I saw five names but only four guys on your latest Facebook photos. What happened with Ryan?

Danny: We are a five piece (the answering team plus drummer Zachary Herber). Due to Ryan’s work situation he had to relocate temporarily to Maryland. But he’s really dedicated to making it work, he flies back to Texas for shows, then flies back up the next day!

Ryan: Yea, it’s definitely not ideal. But it has given us the opportunity to be very selective about the shows we book each month, and gives us time to really plan and promote them in order to make sure that even if we only do a single show in a month, it’s a banger. 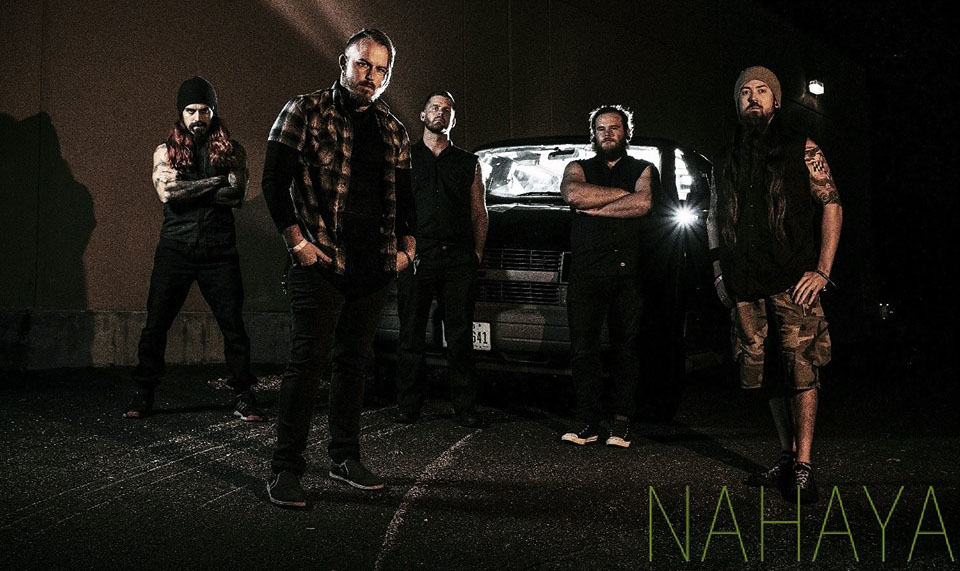 How did the band get together in the beginning?

Ryan: Semir and myself played together in a band called “Perish the Land” in San Antonio, and had been talking for a while about starting something on the side that was faster, cleaner, and had a more European type of style. I had already been writing music for that project for a couple of years. So after “Perish the Land” sort of disintegrated, we were off to the races.

Did you play in any other bands before?

Danny: Semir and Ryan came from their previous band “Perish the Land”. Zac used to play in a band called “In Spite”. Carl was in several projects; “Sworn to Secrecy”, “Sella Tursica”, and “Gimme the Creeps” to name a few. I previously played in “Painting the Massacre”.

You mention In Flames, Dark Tranquility, At the Gates, Soilwork, The Haunted, Children Of Bodom and Amon Amarth as your favourite bands and your main inspirations, but who were your local idols in San Antonio in that time: S.A. Slayer? Juggernaut?

Danny: None of us except for Carl are natives here, so we don’t know much about the old school bands, but there are a ton of current bands that kick so much ass. My personal favorites are Immortal Guardian, Realm Of Disgust, Memories In Broken Glass, Darkness Divided, and Shaping The Legacy. I could keep going but I don’t know how much space I have, haha!

Carl: As far as the elders of the SA metal scene I drew a lot of inspiration from Union Underground, Pitbull Daycare, and Upon A Burning Body but there are so many innumerable new say acts changing the game.

What does your band name mean?

Ryan: “Nayaha” actually means “the end” in Arabic. I studied the Arabic language when I was in the Marines back in the early 2000’s, but never thought it would come in handy in the civilian world! I went with “the end” as a sort of reminder that the time we have to make something great out of this project is always getting shorter, so it’s now or never. That’s probably a little dramatic, but hey…motivation is motivation.

Semir, do you have Turkish origins? Were you born in the US?

Semir: I was born in Adana, which is a southern town in Turkey. I became an American citizen this year after moving here from Turkey in 2011 to follow my only passion: music.

Your first stuff, Transcendence EP came out about a month ago. Did you release it yourself? In what kind of formats is it available: digital (mp3), CD, vinyl?

Carl: We released it digitally up front but we are getting physical CD copies of the EP that will be available when we open up our online store.

Semir: It is available on pretty much every digital music platform, even ones only for specific countries. I believe even Russia and China has some!

Would you like to sign with a big label in the close future or do you want to stay totally independent?

Danny: We would definitely consider offers from labels, but we’d be very particular and wait for a good deal. In the meantime we’ll keep doing it ourselves, it’s been working so far.

Semir: I want us to focus on building our name first. And then when it comes to labels, I want them to already see and know that we are capable of doing it ourselves but, with their little extra push, we can reach a bigger target.

Ryan: That’s one of the good things about being a little bit older and having a new project. When an offer comes along, you get to really scrutinize and weed out the bullshit. You get to have the mentality of “We’re doing OK on our own. What can you all do that we can’t?”

What is the meaning of “Transcendence”?

Carl: The meaning of the album title had a lot to do with people that I’ve lost in my life. The ability to move forward and carry on with respect to them because I’m sure that’s what they would want us to do. A story never truly ends with loss. It’s like a plot device in the greater story of our lives.

How are your songs born? Who brings the riffs, melodies and the lyrics?

Danny: Typically Ryan or myself will come up with the song ideas and record a rough draft at home, then bring the basic idea to the rest of the group and we build off that and refine the idea. Carl writes all the lyrics, the rest of us aren’t clever enough for that.

Carl: I’m fortunate enough to have great musicians who put together these amazing song ideas and I write about the way music makes me feel in a general sense. It’s usually context to content.

My most important question is: when is your debut album going to come out?

Ryan: That’s a little tricky. Due to the overall nature of the metal game, there seems to be more of a benefit to having smaller releases more frequently than trying to save up a bunch more money, and spending a lot more time in the studio. When we all have full-time jobs, booking studio time for everyone all at once for a week straight or more just isn’t realistic. But don’t worry, we already have new material locked and loaded.

Will your musical direction change on it?

Danny: We’ll definitely stick to our fast melodic roots, but you’ve gotta change it up a bit to keep it fresh! We’ve all got a broad range of influences and I personally would love to explore and expand our sound.

Ryan: The main aspect that I’m focusing on is taking what we’re already starting to do, and work to always improve upon it. Not necessarily changing it, but mastering it. Cleaner playing, more mature song structures, smarter transitions, etc.

Carl: We will hold the speed and melodic roots close to the chest but there will be progress in tying in different styles that are complementary to our original sound.

Semir: We want to stay melodic, and stay inspired by our Scandinavian and American thrash metal influences.

Will the songs of the EP and The Marauder single feature on it or will you write brand new compositions?

Ryan: As I mentioned before, shorter releases more frequently is the direction we’re going at this point. We already have our next release almost ready to do, and we’ll most likely release it as a supplement to the “Transcendence” EP. But don’t worry, both “Transcendence” and the follow-up EP will each have an official music video going along with them.

Do you have any other songs that you missed from the EP?

Danny: Yes, there are 5 or 6 songs that didn’t make the cut on the EP. We may release those on streaming services for free in the near future.

Do you play any cover songs on your concerts?

Danny: In some of our early shows we covered a song or two, but not since then. At the Gates’ “Slaughter of the Soul” and “Suicide Nation”, and also “Fuckin Hostile” from Pantera. We’ve actually got a few other covers we’ve played around with but haven’t been performed that are metal covers of non-metal songs, like 80’s pop and country stuff.

Have you ever had any gigs abroad?

Danny: Never played any shows out of country, but we really want to! Hopefully in the coming future it will be a possibility!

Do you have any chance to appear on the European stages in the near future?

Ryan: Having our music reach outside of the US to places like Europe has been a major goal since before Nahaya even had a name. Now that it seems like we’re getting some attention from Europe and elsewhere, it’s really only a matter of time before a European show just makes sense. I guess we should make sure our passports are up-to-date…

Semir: Definitely, our biggest target is Scandinavia. Once we start to reach that, I have full faith that we will blow their mind with our songs and performance, it all starts with high self-esteem, believe in yourself and your band mates, and let the metal gods do the rest. 🙂

How would you recommend you music to the Hungarian death/thrash fans?

Semir: I love Hungary! I have several Hungarian friends in Turkey! Helló emberek! If they love feeling the rain on their hands while reaching out for their greatest goal in life, I tell them to close their eyes, put their headphones on, and listen to some Nahaya. Melodic thrash/death metal fans, if you love speed and melody, Nahaya will give you what you’re looking for.

Ryan: I would just say just give it a chance. We’re pretty heavily influenced by some of the greatest European thrashers in the game, so if you like to get down with ripping guitar harmonies at about 230 bpm or faster, you probably won’t be disappointed.