Mexican band Acrania mixes progressive thrash metal with jazz and latin music. The upshot is something very unique and phenomenal. They released three albums until now and start to work on the next one. I asked drummer Johnny Chávez about their career, musical concept and tour plans.

Before Acrania you already played with Luis in Necrofilia. Did you play another style of metal music, without jazz and latin elements?

Yeah, Félix (the original guitar player of Acrania) was also in the band. Necrofilia was something entirely different. It was the first band we ever had and we weren’t sure about what we wanted to play so it came out sounding kinda thrash, kinda punk, kinda old school death. Not really what we wanted but we used it as a vehicle to experiment until we got to something close to what Acrania is.

As I know, Alberto is a founding member of Acrania, too. How did you get together?

We met him through some friends in common. At the time we wanted to reinvent ourselves and our music and decided that the name „Necrofilia” didn’t suit the path we were going for and so we got rid of our old bass player (since he wasn’t up to the experimentation we were going for and also tbh, he really didn’t play that well) and we found Alberto who was just the right guy for us.

How did you invent to make this kind of music?

Well, one day we realized that we all shared the taste for jazz and latin music and prog besides metal, and that made us think that we should do music that goes with us and our environment. I mean, we grew up in Mexico City, not in Stockholm or NY, so instead of making whatever someone else has already done (and greatly) why not try to paint a picture of our lives in Latin America through our music.

Your musical influences are very diverse. Does everybody love everything or one of you loves jazz, the other one loves latin music, and so on? What are the common points of your interests?

As I mentioned above, we all like a bunch of stuff, though some of us listen to some genres more than the others we all enjoy music a lot. We all love Atheist and Cynic (which are huge influences for us). We also love Paquito D’ Rivera, Dave Brubeck, King Crimson and any type of salsa music, too. We have a lot of music that brings us together.

Are there any bands in Mexico that play similar music?

Not that I’m aware of. There are a bunch that explore more the prehispanic part of our culture.

How big audience does this kind of music have there? How big crowd do you usually play in front of?

Do you have to face any – political – difficulty or obstacle in Mexico to play whatever and wherever you want?

Not really. Or at least we haven’t experienced anything like that until now.

How important is it for you to proclaim your opinion or your attitude in some political or social issues via your lyrics?

It is very important for us. Growing up in a city like this and being in touch, closely, with our heritage and how politics affect our lives (speaking throughout Latin America in general), we find that there’s a lot to say about it. It’s an escape route of sorts for all the anger, frustration, joy, etc that living here and having this system for life brings to us.

In your opinion, is it an advantage that some elements of different styles are mingling in your music – so this way you can get to more people, or is it a drawback because jazz and latin music fans may consider your music too hard, and on the other hand, metal fans may find it too soft?

A bit of both. Although people are way more open minded nowadays than when we started so we find ourselves getting new fans both from the metal scene and from the totally unrelated one. We do get a lot of comments about the growling from non-metal people. They always want us to change that part but… no can do!

Acrania means “lack of cranium”. Why did you choose this name? What would you like to express with it?

Well, we thought it was the perfect explanation for what we do. Having no cranium means to us that we have no barriers (mentally and musically) so we can go and mix and experiment as much as we want.

You released three albums (and an EP) until now. Can you draw the camber of your musical evolution? How did your music changed album by album?

It has been a constant evolution for us. Every record has it’s own “personality” so to speak. The first one is a collection of songs we worked on for years. And it was our first attempt at the sound we wanted, so it’s not completely “whole” in a way. The second one was like the breaking point for us, we finally understood where we were going and how to achieve it. And the latest one is (to me) where we finally “broke the code” and were able to get to the point we wanted ever since we recorded the first one.

They give out some “scholarships” to projects they find interesting and that feel like they support our culture so we approached them and won it once. After that we got offered another one so we could fund our latest release and they helped us with some flight tickets, too. It was a bit of luck and a lot of hard work getting that.

When and how did your two “freshmen”, César and Dani get into the band?

César got into the band at the end of 2012. We sadly had to part ways with our founding guitarist Félix Carreón and since we knew no one that could fit his shoes we decided to launch an open audition and César just nailed it.

Dani has been with us for a year now. Our latest percussionist Ignacio Ceja got married and chose to work just playing salsa music (he made his own orchestra and is doing great!) and we found ourselves on a dilemma. Somehow Luis realized he had a neighbor who was a percussionist and we auditioned him and man! He’s just magnificent.

How are your songs born? Do you work out the themes separately and set the ideas together in the rehearsing room or do you always jam to create anything new?

Luis and César bring the “skeleton” of the song to the rest of us and from there I write the drums and make some percussion arrangements and from there we jam the tunes and try to figure out if it works or not. It’s a complicated and long process but very enjoyable, too. 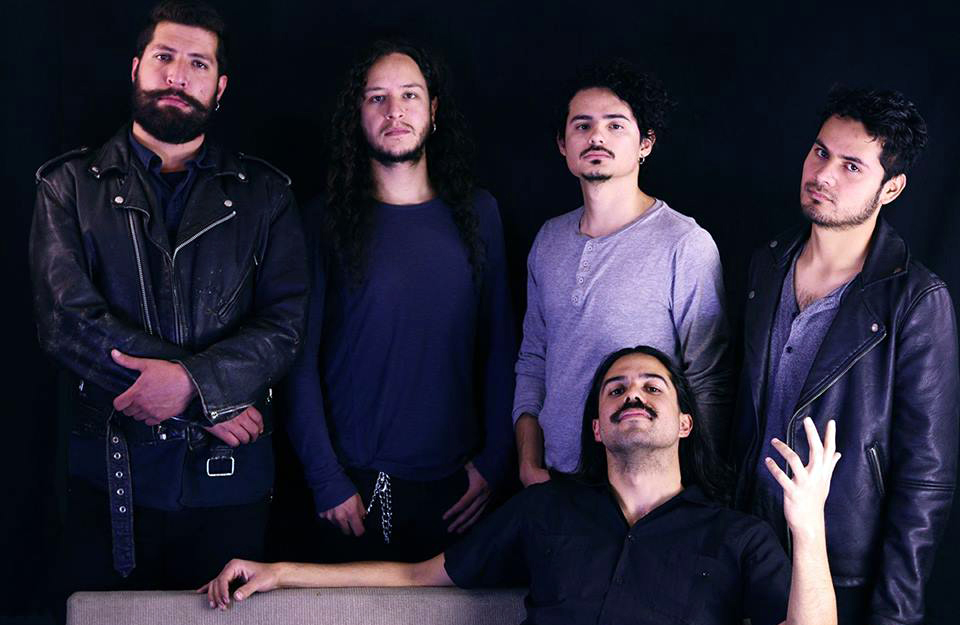 Your latest album Fearless was mastered by Brett Caldas. Why did you want to work with him? What kind of role did he have in creating the final sound of the album?

He had just worked with two bands with whom we’re friends. Both very different in sound, one is called Agora (prog metal) and the other is Voltax (heavy metal) and I listened to their albums and was amazed by how good they sounded and how Brett found the right sound for each, so I approached him and it was a delight to work with him. He took our final mix and transformed it into what we wanted. Glued every little piece together.

Until 2015 you released a new album in every two-three years. Your last stuff came out in 2015 so it’s a logical question: when is the next album going to see the light of day?

We are actually starting to work on that. Hopefully we’ll have a new album by mid next year.

How about the new songs?

As I said, we’re just starting the process. So far we have 3 “skeletons”.

Does the album already have its title?

Nope. Not even lyrics written yet.

In the recent years you toured in Europe several times. What is the difference in behavior/attitude between Mexican and European audience in your opinion?

European audiences have the stigma of being colder and not that involved. But honestly, when we played over there we had nothing but great times. It was funny for us to see people trying to dance and headbang at the same time. Mexicans/latin audiences are more “loose” not as stiff but also not as easy to conquer.

Can we count on you coming over to Europe in the close future? Don’t miss Hungary this time!

We are working hard on getting over there again. If we manage then of course we’d love to visit Hungary!

Until this, what do you message to the Hungarian metal fans?

Thanks so much for supporting us. We appreciate it so much. We hope to see you over there next year and in the words of your own Pokolgép… Metal Az Esz!