Hi, first of all, thank you for taking your time and answering our questions!

Hi László and readers of Rattle Inc., thank you for having me!

Could you introduce the band to the Hungarian readers, who might not be familiar with you yet?

Decadence, something both old schoolers and new wavers will enjoy. Plus, it’s all 100% underground. It has been inspiring to be part of this band of since the start of this century and counting. We’ve released four full-length albums, two of which were released within one year, and the fifth full-length came last year. We’ve promoted the Underground music scene, pushed for the DIY, licensed our top selling release to three different labels simultaneously while running it through our own label, pushed for other bands to do the same, and had all promotion done by fans for fans through street teams, fan clubs and Metalheads from all over the world.

In addition to amazing fan driven concerts, we most recently visited Venezuela that became the summing up of the 10 years together. Decadence never stopped, it evolved. And now we are back to continue spreading the message. As for our music, the base is Thrash Metal. Think of a hybrid between Testament and Kreator with a next level of melody and viciousness on top of it that could reminiscence of Death. The vocals follow that same combination.

How do you split the tasks between the two of you?

Nowadays I am behind the Decadence Underground Network. Kenneth Lantz is behind the sound. Kenneth Lantz and I know each other from even before Decadence and we have been writing music together for over 15 years. On our latest album Undergrounder I have not written the music. Kenneth did it all and I supported him with thoughts and ideas and gave feedback to his work. Previously, I would do half of tracks on the albums and get his feedback on my work as well.

This time around I wanted do give him full creative space to do it all and I’m so proud of what he has accomplished. We have pushed ourselves a lot to bring out the very best in each other. You will hear an interesting synergy of Thrash Metal elements mixed with Death Metal elements in a way that will remind you of the good old days with some energizing new touches!

I don’t see any Decadence tour dates. Do you have any plans to tour, especially in Europe?

The good part about being an underground band is that you can do whatever you want whenever you want. Our latest album Undergrounder felt like a comeback album and now we’ve got a brand new feel for the band. Would be awesome to visit Hungary, I would enjoy that and playing for you guys. Keep your fingers crossed for that! Or even better, get in touch and get us over there!

What do you consider as the biggest achievement of the band?

I’m so impressed with Decadence fans. You are really what has made this band and what has brought us back to doing this again. I’m so grateful for that and want to make sure everyone knows who made this band, and that’s not me, it’s all of you fans out there. In the chorus of Undergrounder-track Manifesto there is a line that goes: “The one who is many”. That is referring to Decadence and all the fans around us carrying the band forward. That is our biggest accomplishment.

As a female singer, do you feel that being a woman is a disadvantage in the metal scene, or not at all?

I’m a musician in the Metal scene, and that’s that.

Do you have any idols among female metal singers?

There are many extremely talented female vocalists out there, as well as male vocalists. I don’t separate the two. And idols are for worshipping and I don’t do that, hopefully no one sees me as an idol either, I’m only human (or alien) like the rest of us. 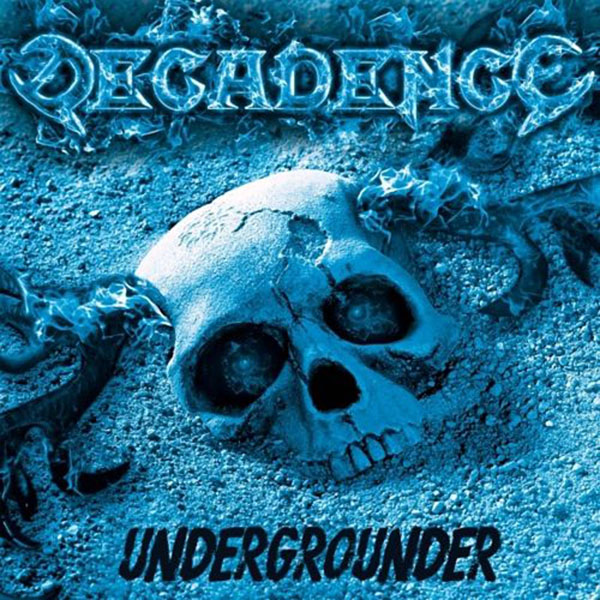 The title of your last album (which got 4 out of 5 points in our fanzine) is Undergrounder and you continuously emphasize that underground is an important part of your music philosophy. Could you tell us why you find underground an integral part of the band still, after several albums?

Wow, 4 out of 5 points, that’s great, thanks! Undergrounder is a name or description if you like, of who we consider Decadence to be after all this time. And who we consider our fans to be. It’s a statement. Decadence’s mission is to encourage other bands to also go DIY. And be able to continue doing great music while still owning the creations and never letting go of the passion behind it. That’s why we do it. One of the greatest feeling of all is that we’ve done it alone. That means without ever being signed to any label. We’ve released five full-length albums, two of which were released within one year, and a garage bootleg.

And now we got back to continue spreading the message. The message is to be independent and do what you believe in without relying on anyone or anything. There is pride in creating something from scratch, acting rebellious and dare to do things your own way because you believe in them. This is what we stand for and so does the title Undergrounder.

What is on your playlist nowadays? Name 3 bands! 🙂

Thrash Metal, particularly the Bay Area era, lies closest to my heart in general and I still listen to bands like Testament, Metallica, Kreator and Megadeth every day. Crossing over the subgenre, I consider Death to be the greatest band of all time. So yes, I guess all this makes me an old schooler then, no new bands as favorites anyway! I’m also a big fan of 70’s Rock so you will definitely find me listening to that as well.

Kitty, thank you for the opportunity and your answers!

Thank you and the Rattle Inc. readers for supporting Decadence. I look forward to continue doing what I should do – bring you more music!