During the 80’s the compilations were very popular and helpful for both the bands and for the fans, the bands had the chance making a name for themselves. Did you release any compilations?

No, we didn’t. But we would have loved to had we knew what we were doing.

How was your connection with the bands? Did you get on well with them? Were they colleagues or friends?

We were kids. So they were all nice to us. I wouldn’t call them colleagues or friends except Katon from Hirax and Gene Hoglan from Dark Angel. They were our friend. But most of the other bands just treated us well, but we were 14 years old and they were in their 20’s or older.

Did you pay the studio costs as the bands entered the studio to record their material?

I have no idea how the finances worked.

Did you have an own home studio where the bands could record their albums? Did you have mixer, sound engineer etc.?

The bands had studio time and on occasion we got to hang with them in the studio. But I don’t even remember where that was.

How did you support your bands? Did you pay adds in metal magazines or fanzines? Did you send them on tours?

We didn’t provide any support in any way. We couldn’t even get the records we produced into the record store. That’s why we didn’t make any money and all the bands had to go to other labels. At least we never prevented them from pursuing success.

Would you say, that thrash metal reached its peak around those times?

I don’t know about peak. But it was really popular. It started to enter the subgenre categories with D.R.I. having a punk background and Venom and Hellhammer going the death metal route or Hirax and Dark Angel maintaining the heavy metal vibe.

Do you agree with, that Slayer, Anthrax, Megadeth, Dark Angel, Exodus and Metallica opened the doors for the second generation of thrash metal and made the genre relatively popular?

Sure. They were the first of a generation. So many bands have been influenced by them. And so many genres have been spawned. 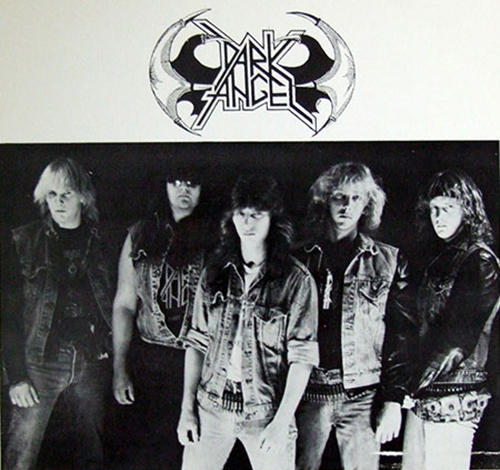 How was your relation with metal magazines and fanzines?

We did our own. We didn’t have any relationship with any other magazines.

Did you like reading fanzines? Which fanzines do you remember?

We read all of them. Hit Parader was the glossy commercial one. But we found all kinds of little fanzines. I don’t remember any in particular, but we loved discovering new bands.

Could you tell us how did a day go? I mean, what were your daily tasks?

I was in Junior High so that was my day. On weekends we went to shows and hung out and listened to music. We made mixed tapes and sent letters to bands.

Did you give your bands artist freedom or did you chip in what they have to do? Were you satisfied with the approach of the bands?

We had no input as to what the bands did.

What were the labels that you got on well the best with? How about other labels such as Metal Blade, Combat, Megaforce etc.?

We didn’t interact with any of them. We would see Brian Slagel at shows but he didn’t acknowledge us as human beings.

As far as the cover of the albums, did you have a designer or an artists who drew, painted the covers? Did you also make motion covers for different records? I mean, did you submit, what kind of covers the bands have to use?

The bands provided the art.

Did you always pay royalties to the bands? Could the bands earn some money as far as the selling, merchandise etc.?

Did the bands of Metal Storm shot videoclips at that time? Did you consider it important to shoot videoclips?

No. Video was not a thing back then.

No. No metal shows at all.

Was it easy getting in touch with radios, TV channels, magazines etc.?

Radio sucked. They did not play metal.

Could you tell us how many items were sold from the releases of Metal Storm? What was the most successful record of the label?

I have no idea.

How were the releases of Metal Storm distributed in Europe?

No European distribution at all.

How much did the fans, the media like your releases?

I think the fans that got to hear the records loved them. Even today you can read reviews of the records and they are classics. Maybe the production quality is a little low, but the music is substantial.

Are there any bands from the early days or later on that you regret not having signed or failed at the last minute because another label made a stronger offer?

Hirax is the cutting edge of speed metal. They are still going strong, touring and selling music. I don’t regret not signing them because I want them to be successful. But we knew they would be the cultural icons that they became. I really wish we would have signed Metallica. I think I might have had a different carreer path if that had worked out.

Would you say that it’s easier than before to promote a band nowadays for a label with the new tools, such as internet, or is it just a totally different world and nothing can’t be compared?

As far as the internet, what do you think about downloading of music? Do you support it or are you against it?

I am for getting music to the listener. I am for bands and musicians benefitting from their music being listened to. I can’t afford to pay record store prices. Back in the day one guy would buy a record and make a tape of it. And we would pass that tape around to all our friends. There is no way all those people could pay for all the music they wanted to listen to. So we had to share. We would make mix tapes of our favorite songs. Now it’s a digital playlist and we copy mp3’s. If someone really likes something they will pay to have the original. I don’t know what the best solution is but my gut feeling is the more people listen to your music no matter how it was obtained the more money the band will make in the long run.

In your opinion, is it easier to get a deal nowadays than 30-35 years before?

You had to hustle back then. We would trade tapes and get demos and sneak recorders into shows. We didn’t do it to make money, just to listen to and share music. I hope that continues in the same spirit. I don’t want anyone to get ripped off.

My last question: please tell us your 10 alltime Metal classics and why these did you pick up?

This is a hard question. But I love it.
Hirax: Raging Violence – Honestly one of the greatest speed metal albums of all time. Seering vocals and soul stomping metal.
D.R.I.: Dealing with It – Punk rock the way it was meant to be.
Suicidal Tendencies: Suicidal Tendencies – So many classics. So strong and so original.
Iron Maiden: Number of the Beast – Enough said.
R.K.L.: Keep Lauging – Original and talented. It spoke the truth.
Slayer: Show No Mercy – Packed with power and paved the way for so many talented bands.
Metallica: Kill ‘Em All – The greatest Metallica line up and the Metallica I want to remember.
Motorhead: Ace of Spades – Lemmy is my all time favorite rock star. He created an entire genre, he called rock n roll.
Black Sabbath: Paranoid – It’s tough to pick an album from bands like Motorhead, Iron Maiden and Black Sabbath. They all have so many iconic songs. I hate to be cliche and pick the least obscure albums. But these have the songs you sing in your sleep. They built dynasties on these songs. They have so much to offer but this is where it all started.
Dio: Holy Diver – You have to pick one. It could have been any one, but I picked this one.
The Offspring: Smash – Again one of many great albums by a great crossover band.
Crobot: Legend of a Space Born Killer – Just to throw something in from this century. I saw these guys open up for Motorhead. Awesome new metal. I like it.

Mike, thanks a lot for your answers! Anything to add to this extensive, in depth feature?

I really appreciate you reaching out to me. I love this music. I love this art form. I wish you the best of luck passing on information and ideas to legions of fans and artists and I hope this takes the world by Storm.