Adam Lehan’s about the beginnings of his career

Since the releasing of Forest of Equilibrium album Cathedral belongs to one of my favourite groups. That masterpiece has had a great effect on me back in the day, one of the biggest doom records of all time. Guitarist Adam Lehan was so kind to tell me about Cathedral’s early period and more!

So Adam, do you still remember how did you discover music and metal in general? At which point did you start finding an interest in metal?

A couple of my uncles were in a variety group in the 70’s called The Grumbleweeds who had their own radio show, so music was always around to a degree. I started getting into metal when I was around 12 years old but had no money to buy albums so joined a record library and just taped everything I could find.

When did you decide to become musician? How did your choice fall on guitar?

I had always had cheap toy guitars and stuff as a child, and my uncle was a guitar player so that might have been it… I was always attracted to the shape of a stratocaster. I decided I was going to try and become a musician when I was about 14.

What were your influences to be a guitarist at all? Were you self taught or…?

Early influences were Brian May, Eric Clapton and Ritchie Blackmore. I was self taught.

Did your parents always support your musical ambitions and endeavors? Did they 100% stand behind you?

Yes, I was lucky in that my folks understood why I was so obsessed with it and supported my decision.

Do you still remember how and when did you get involved in the underground scene? Did you perhaps take part in the tapetrading/fanzine network?

I was very shy as a young person, and hid away from the world to a degree until I was about 17 and got my first band going called Deadline. From there I started hanging around with some people who were more into hardcore punk and introduced me to a lot of the underground stuff.

Did you have penpals from all over the world whom you tapes/fanzines traded with?

No, I’m afraid I didn’t do much tape trading early on, but I did start doing it a little by the end of the 80’s. It was also a good way to get a lot of the „video nasty” horror films that were banned in the UK.

At what age were you the members of Deadline, Flight and Park Drive? What type of music did these bands play? Have you ever recorded any materials with them?

In Deadline I was 17/18 and it was basically a really bad Venom inspired band, we were pretty dire but were young and naive enough to keep going. Flight and Park Drive were basically the same band, a project I started while in Cathedral. All these bands recorded but only some Flight tracks have survived, you can hear them on Facebook.

Were these acts your first experiences by the way?

Deadline was my first real band.

When did you join Lord Crucifier? Is it correct that the band moved in 1985 to Halifax, England, due to their dissatisfaction with the metal scene in Italy?

Yes, they moved to England because of the Italian music scene. I joined them when I was about 18 I guess but I only stayed with them for a few months.

Lord Crucifier recorded some materials during their existence. Can you speak us any details about them? Did you manage to make a name for the band?

They recorded some demos and an LP, but I didn’t play on any of them I’m afraid.

Do you agree with that the origins of thrash metal are generally traced to the late 70’s and early 80’s, when a number of bands began incorporating the sound of the New Wave of British Heavy Metal, creating a new genre and developing into a separate movement from punk rock and hardcore?

Yes, I would agree!

At the mid 80’s thrash metal ruled the underground scene. What do you recall of the British thrash scene, when bands started popping up such as Onslaught, Virus, Sabbat, Hydra Vein, D.A.M., Deathwish, Ignorance, Slammer, Xentrix, Anihilated, Seventh Angel etc.?

To begin with the local thrash scene was quite small, so Deadline played mostly with punk bands at gigs rather than metal. We would do interviews for fanzines though and hear of bands like Bolt Thrower etc. But obviously as time went on and I ended up in Acid Reign then I became very much aware of the thrash bands all across the UK. 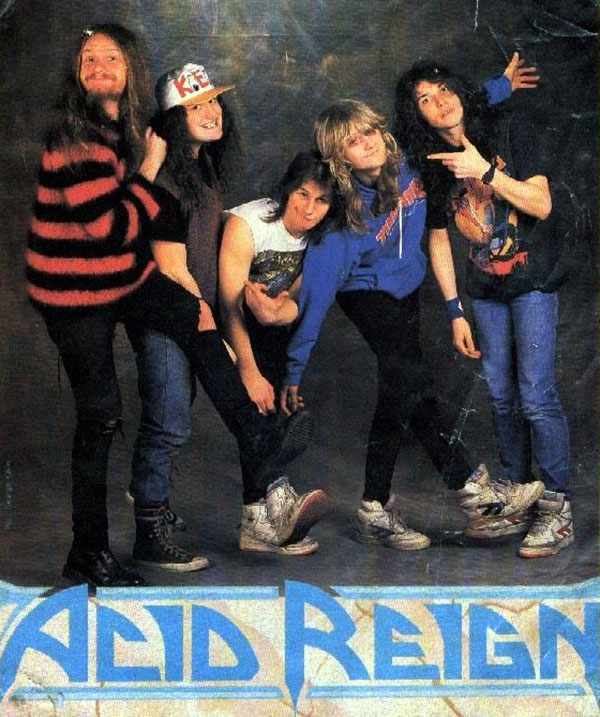 How would you explain that the British thrash scene had often been the subject of dismissal due to their relatively short number of substantial and longstanding acts, as well as a far more limited impact on the development of the sound?

It seemed to me that people in the 80’s in England were more interested in the American and European bands, few people in the UK were really supportive of UK thrash bands, not enough people anyway.

There were certainly many bands, but they struggled to make an impact on a global level.

Did all the British thrash bands have an own style and sound or did try to jump on the Metallica bandwagon? Were they heavily influenced by the Bay Area scene?

Yes it certainly seemed like most UK bands would either try to emulate either the Bay Area sound or the European sound, especially the stuff coming out of Noise. Which may explain the problem really.

In 1989 you joined Acid Reign to replace Gaz Jennings. How did you get in the picture exactly? Were you the first choice of the band or did they try out other guitarists as well?

The local scene by the late 80’s was quite healthy so I knew Acid Reign and they were aware of Deadline and Lord Crucifier. When Gaz left, I think I’d be right in saying I was the first and last choice, as far as they told me anyway.

How can you sum up the Acid Reign period?

Acid Reign was fun at first but it wore off for me pretty quickly. They’re nice guys but I never really felt like it was mine.

Was it a more serious/earnest outfit compared to the previous ones that you have played with?

More like the opposite! The frustrating thing was that a lot of time and effort went into the songwriting but the gigs were more about joking around and whatnot. I did hang around in Harrogate a lot during that period though which is how I first met up with Gaz and heard what he was doing his Morbid Doom demo.