I don’t need to write any detailed introduction considering this new outfit, it’s simply enough to mention two names, Mr. Alex Marquez and Mr. Gus Rios. Latter told us the story behind of Create A Kill.

So Gus, thanks a lot for accept of the interview request! How did Create A Kill get together? What did motivate you to form the band?

I had written some songs for Malevolent Creation’s Invidious Dominion album, which was a very thrashy album, and Phil would only allow 2-3 songs on the album that he didn’t write which I totally understand because it was his band. Three of my songs made it onto the album, but I had two more that even Erik Rutan (who produced that album) thought were really good. I sat on those songs until I quit Malev back in 2014 and then wrote a bunch more! I knew Alex had a killer thrash style voice and so I asked him to do vocals on it. But then the Gruesome thing took off, and now here we are. But to answer the question clearly, I’ve always loved thrash metal the most and wanted to hear some evil fast thrash!

Is the nucleus of the band you, Alex Marquez and Daniel Gonzalez?

The nucleus is kind of really just me. I asked Alex to come and write lyrics and record vocals, while Daniel just did the two guest solos. I think the press release is a little misleading, but the truth in the end is that I could not have done this alone. I wrote all of the music, but without lyrics and vocals, its just an instrumental album. And I am very grateful for all of the help!

As I read, you are handling the guitar duties along with Daniel Gonzalez, Alex Marquez is doing the vocals, but what about the bass player?

Daniel only did two guest solos while I wrote and recorded all guitars and bass. I have my own studio, so it’s just easier to get things done this way.

Is Create A Kill a project or do you want to do it as a full time band?

I would love for it to become a more full time thing, or at least co-exist at the same level as Gruesome. In the end that isn’t up to me to determine… If there are enough fans liking what we’re doing, then the demand will require it to become more than what it is now.

How long are you acquainted with Alex Marquez, by the way? Are you friends?

I’ve been really close friends with Alex for probably 20 years at this point…like a brother to me. He was one of my favorite drummers in the early 90’s, too! No one has groove in death metal quite like his.

In your opinion, does he belong to the best, most talented drummers?

Absolutely! His sense of groove and feel is second to none in metal! He has his own voice and not many can say that. 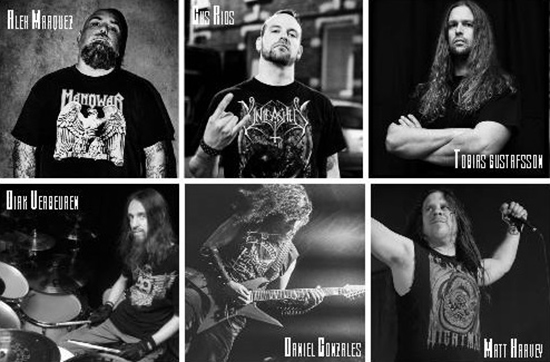 Since you are involving in other outfits as well, such as Gruesome, Upon Infliction, Evil Amidst, and the other guys are also taking part in several outfits, how much time can you spend with Create A Kill?

Again, that will all depend on well this album is received. If the demand is there, I will put together a solid band and take this out. I already have some guys lined up in case!

At which point did you start working on the material? How did you write the songs?

Way back in 2009 when MC was writing for the Invidious album, I wrote I think like five songs, three of which made it onto the album and the last two sat there until I quit MC five years later. I write by going to my studio, turning on my Marshall to decent volume, smoke some weed, ask Jeff Hanneman for his presence and grace, and write riffs as evil and fast as I can! Then I record them into pro tools to a click, record drums and then record bass and guitars. Then off to either Matt or Alex…or Dirk or Tobias for this album.

What bands would you cite as your influences?

I was always much more into the more extreme thrash bands of the late 80’s. I liked Testament, Megadeth, Metallica, etc, but once I heard Reign in Blood I just wanted to continue searching for the fastest and most evil shit I could find! Kreator, Dark Angel, Devastation, early Sepultura and obviously Slayer would be the main influences. But there are also traces of Malev and Vader because I love mixing in the blastbeats, too!

When did you enter the studio to record the material? What about the recording sessions?

The entire album is a mix of various sessions. I would write a song, record it, and then send it to Alex. Same process with Dirk and Tobias…I sent them demos and told them to add their own voice and ideas to my skeleton arrangement. The guitar sound is the only constant thing on the album…it was always my Marshall with about three different guitars. Dirk and Tobias both did their drum tracks at their convenience either at home or at a nearby studio.

Tobias Gustafsson and Dirk Verbueren appeared as guest drummers, how did you pick up them?

Both of those guys are world class drummers, but they are both also super cool guys who I am privileged to call good friends. I knew that their styles would be a good fit for what I was looking for because they’re both big Dave Lombardo fans and fully understand that vibe. I am very grateful for their contributions!

Is you goal with the music to keep the flame of the 80’s thrash/death metal alive?

Yeah, I like thrash metal ugly, visceral and evil! When the production becomes too modernized and sterile, those elements get very diluted I feel. Also it seems like no one is doing this style these days, so hopefully there is a market for it and I can keep doing this!

Both the drum and the vocal parts were devided, how did you decide it? I mean, what did it depend on, who played the drums and who singed the songs?

The drums I picked the songs that I felt would fit each guys style best. For Dirk, the sow is mine is pretty intricate with some fast double kick, which I knew he would just KILL! Tobias’s tune, premeditated, is very slayerrific and I knew that he would do his best Lombardo impression, while throwing in his explosive style. Alex I had do a song that again, I felt suited his style best. As far as vocals, Matt really just ended up doing the last three songs left to record because Alex had moved away to Arizona and didn’t have access to a studio. But I’m very pleased with Matt’s performance and will certainly feature him more on the next album!

Would you say, that is this a difference between Alex’s and Matt Harvey’s voice? Hardcore touches can be found in Alex’s performance, while Matt’s voice is deeper, similar to growling…

You pretty much nailed it! Alex has that hardcore influence along with the Bay Area thrash vibe while Matt is a total German thrash evil!

Do you think that the shared past of Malevolent Creation is noticeable and audible?

I think it’s very noticeable. To me MC was always a very thrashy death metal band and these songs were intended to be MC songs at one point. All I really did was record them in E flat instead of C sharp and basically turned the deal more towards thrash than death metal.

Can you still give us any details regarding on the material?

Like I said, they were supposed to be MC songs that I then recorded with a guitar tuned higher. It’s basically like what if MC was a thrash metal band I guess.

You were responsible for the recording and mixing. Are you satisfied with the result?

Very much, but of course like anyone there are things that I would like to do better. For the next album I want to have a more consistent sound and not so many guests. Make it more of band vibe and production, but still ugly and not modern.

The album was released by Repulsive Echo, what can you tell us about this label?

Kostas who runs the label truly believes in this album and that is the #1 factor to a succesful band/label relationship. Repulsive has been doing reissues and things like that for strictly the love of metal. It’s a label run by a fan for the fans.

Were there other labels interests in the band, by the way?

I didn’t shop around. Kostas was there from the beginning and there was really no reason to seek out a bigger label at this point. I have a studio so I didn’t need a big budget and with a bigger label it’s easy to get lost in the mix. I know that Repulsive will give this release 100%!

Do you plan to play any headliner gigs or to appear on several festivals? Do you have tour ideas in mind?

That all depends on whether or not enough people want to hear us live! I’m hoping for the best!

Gus, thanks a lot for your answers! Any closing words for the Hungarian readers?

Thank you for the support and I’ll see you guys on July 24th with Gruesome!