Singaporean psychedelic stoner/doom band Marijannah released its debut album called Till Marijannah in February 2018. I like the stuff so I wanted to know them better. I sent my questions via e-mail, vocalist and drummer Nicholas Wong answered them.

Nick, where does your band name spring from?

It means “come to Paradise” in Malay, which is the national language of Singapore.

Which bands did make the biggest influence on you?

Which label would you use to define your music: psychedelic stoner/doom or anything else?

Please tell me about Singaporean heavy metal life! What are the most popular genres? Are there a lot of concerts of local and international bands? How enthusiastic the fans are? What kind of a position does Marijannah take on the Singaporean stoner/doom scene?

Death metal is pretty popular and hardcore is huge here. We have loads of shows all the time, both of local and international bands. Singapore has become more and more of a must-hit city in Asia for touring bands in the last decade. There aren’t enough stoner/doom bands to make up a scene but we’ve done well at shows playing with bands of other subgenres of metal. The crowds are welcoming and we don’t feel out of place at all.

How free are you as a musician in Singapore? Does your government forbid, sustain or support heavy metal music?

It’s pretty neutral, the government doesn’t actively forbid or support it. Hundreds of shows happen with no trouble from authorities but of course, like most other conservative countries, it’ll be difficult to be a band if you’re outspoken about glorifying or supporting things that aren’t in line with the law.

Did you/will you have possibility to play gigs abroad?

Yes we’ll be on tour with Potion (psychedelic heavy metal band from Sidney, Australia), playing shows in Indonesia and Malaysia in July. We have something else planned for somewhere a little farther away in the fourth quarter of the year and we’ve released international tour and festival offers for next year. 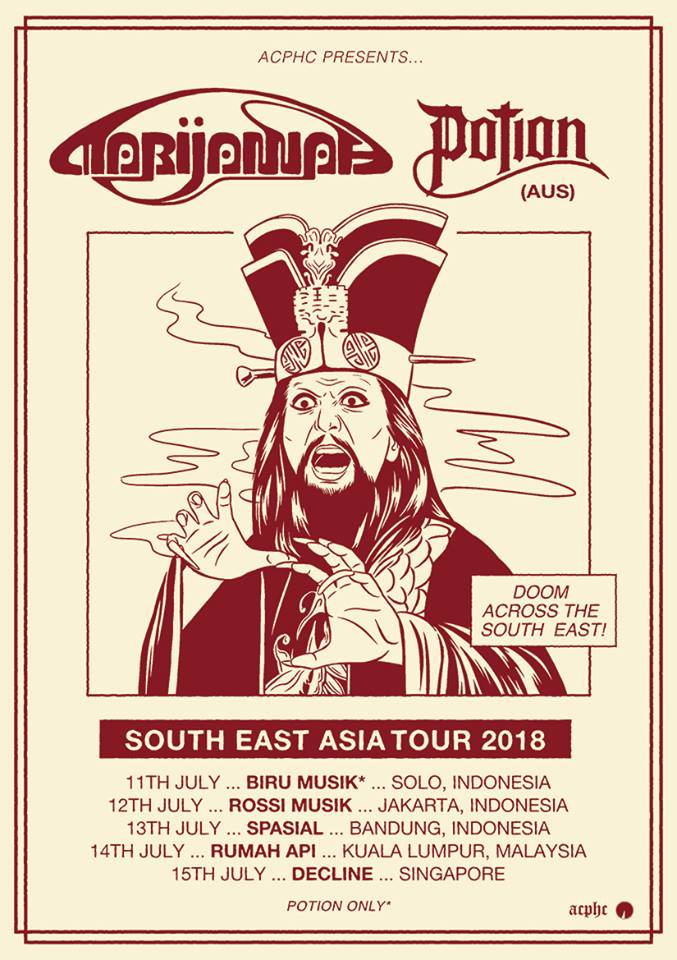 The members of Marijannah play in other groups like Wormrot, Satan!, Abolition A.D. and Caulfield Cult. What should we know about these bands?

Wormrot is the biggest band in Singapore, Satan! and Caulfield Cult are dead, Abolition A.D. might seem to be alive but they’re actually deader than dead.

Why did you release „just” a four song album? Have you got any other songs?

I think 29 minutes is a good length for a debut release. Anything more would be too much to digest from a brand new band at that point. We’re working on songs for a new record right now and we have 5-6 fresh bangers that we’re polishing up and we’ll look to bring them to the recording studio in August probably.

How are your songs born? Do some of you bring the basic structures, the riffs, or the melodies? Or do you find out everything together…

Rasyid (Rasyid Juraimi – guitar, vocals) writes 90% of the riffs and the 3 of us (Nick, Muhd Azri – bass, Nicholas Ng – guitars, vocals) try our best to keep up.

Do you play covers on your concerts, too?

No, we are too lazy to learn other people’s songs. Skinny (guitarist Nicholas Ng) and I play WWE entrance song covers during practice sometimes.

What can be the next step for you: more concerts, new album?

Tour in July, recording of the new songs in August and September, another tour in October or November, chill out after and in between. Thanks for doing this with us!