Were both demos spread around? Did you spread them in the tapetrading/fanzine network?

We did but the first demo was much more well received than the second one. This happened for a couple of reasons. The first demo had better sound quality and the songs were more straight forward. Michelle, Greg and I were really influenced by Prog Rock and Jazz Fusion so it was reflected in our songwriting. Expressing yourself creatively doesn’t always resonate with everybody. We were just letting the creativity flow without concern for catchy choruses and riffs.

Did it succeed to draw the fan’s attention to the band? Did the demos help you to make a name for Wargod?

Yes, it did. We were blown away at the response we got from the fanmail. We sold all of our demos, shirts and stickers and signed autographs for some people. It was awesome and really humbling at the same time. We had a giant box of fanmail and a lot of it was from Europe.

What were your views on the L. A. scene at this point compared to the early 80’s one? Were you familiar with bands such as Death Force, Decapitation, Necropolis, Megadeth, Necrophagia, FCDN Tormentor, Agent Steel, Holy Terror, Evil Dead etc., that belonged to the next wave of thrash metal?

Yes, very familiar. I had seen and heard all of these bands except for Death Force. My pre-Wargod band Decpaitator became Decapitation and then Necropolis the following year in 1986 with lineup changes along the way. Necrophagia rehearsed next to us at our rehearsal space and they were great. A few of the guys from Decapitation and Necropolis are still good friends of mine. The scene was changing in a big way since the early 80’s and we could feel that some thing new and exciting was happening. The hair metal thing was in full swing at this point but there were so many great thrash bands coming up at that time. I for one thought it would never get mainstream exposure. I am glad I was wrong.

You appeared on several compilations, such as with Warning (mislabeled as Day of Attonement) on Speed Metal Hell Vol II (New Renaissance, 1986) with Redemption (mislabeled as Preserved Corpses) on Thrash Metal Attack (New Renaissance, 1986) and with Intimate with Evil on Metal Massacre Vol. VIII (Metal Blade, 1987). Did these materials manage to draw the fan’s attention to the band? Did these materials help you to make a name for Wargod?

Actually, Day of Atonement and Preserved Corpses were the correct song names and they were tracks from our first demo. Intimate with Evil was actually called Intimate with Death and appeared on our second demo. We re-recorded it for Metal Massacre VIII at Track Record in Hollywood in August 1986. Unfortunately, we broke up in September 1986 before any of these compilation albums were released. Michelle continued to receive fanmails at her PO Box but we had all moved on and there was no band anymore so nothing became of it.

After Wargod, Michelle, Greg and I recruited Jim Korthe (Phantasm/Dimestore Hoods/Third Strike) on drums for a new Wargod and changed our name to Dementia. This lasted three months from October 1986 until January 1987. We demoed three songs that were Wargod leftovers. Jim left and joined Phantasm and we broke up for good. Jim tragically passed away in 2010. He was a very talented drummer and singer.

Did New Renaissance and Metal Blade – or any other labels – show an interest in signing Wargod at all? Did you perhaps start negotiations with any labels?

There was talk of doing an album with New Renaissance but we broke up quickly after that so it was only in the very early stages of discussion.

When and why did Wargod come to an end? What lacked for the band getting bigger?

Wargod broke up after our last gig on September 18, 1986 at The Country Club in Reseda, CA. Most of the people at that gig were our friends and Lee left the band afterward. He was frustrated at our lack of progress which was very understandable. We only played 5 gigs over a period of 14 months, our songwriting process was slow and ever changing and we did not have a record deal. Things were progressing very slowly and that was our downfall. Lee was right to leave the band. We were spinning our wheels.

After Wargod’s demise you and Michelle contributed to Post Mortem’s The Missing Link EP, then Michelle went on to form Phantom Blue. Rob joined Attaxe, In Cold Blood and Subversion, but what have done Lee and Greg at this point?

Lee moved back to his native Ohio and played in some bands. Greg and I actually formed a progressive rock band called Xcranieum in 1989. We recorded two demos and an album in the 1990’s.

Did you and Michelle only help out for Post Mortem or did the band want to join both of you them? How did the recording sessions go?

Katon (W. De Pena, singer) from Hirax recommended Michelle and I to record with them. They were on tour and their guitar player had quit so they wanted to record some songs since they were in LA at the time where Michelle and I lived and where New Renissance Records was located. The EP was recorded at Kitchen Sync in Hollywood, CA in March of 1987. The recording session went great and was a lot of fun!

We had rehearsed the material at Michelle’s house in February 1987 so it went smoothly. The Post Mortem guys are very cool and we had a great time recording it. We recorded additional material that did not make it on the EP. Michelle recorded a short classical guitar piece as an intro to Fetus Man which I still have a copy of. We also recorded a song called Terminus which is a song that ended up on the next Post Mortem full length album.

Our recording of it was never released. We also did a couple of silly improvisations called Rock and Roll Ending and Beginning where we just played beginnings and endings of fake songs. Before they went back home, they asked me if I would be interested in joining the band and moving to the East Coast but I declined the offer.

How would you describe the EP?

I loved it! I was very pleased with the EP even though Michelle and I did not contribute to the songwriting process. The songs had already been written. I also liked that they included older material on the EP. I wish we could have done more songs. I think it came out great though. I think the recording of the song Terminus did not meet their standards. We did not get a great take of it.

What happened with you after it? Did you appear in any other bands or did you stop playing music?

I joined Phantasm a few months after Katon De Pena left the band in September of 1987. We did a one song demo and played two live shows in January 1988. My involvement with Phantasm ended for good in June 1988. Although Rodney continued on as a three piece and recorded an instrumental Phantasm demo in late 1988 into 1989 that is kick ass!

After Phantasm, I played in a progressive rock trio called Xcranieum with Greg from Wargod and did music for TV shows along with electronic music performances and recordings throughout the 1990’s. I am still playing guitar, recording and playing live with a few different bands along with my own projects.

Do you still follow what’s going on in the metal scene? Do you listen to the old, classic stuffs or are there any new acts, that you discovered in the last 4-5 years?

Yes, I still follow the metal scene. I do listen to classic stuff all the time but I like some newer stuff, too. I would have to say as far as more recent bands are concerned, I really like Animals As Leaders, Night Demon, Ghost, The Sword and Meshuggah to name a few. I am always happy when a new Satan, Accept or Destruction album comes out, too!

Are you still in touch/friends with Gene, Robert, Lee and Greg?

I am not in touch with Gene but I saw him at a show about 10 years ago. Rob, Lee and Greg yes. I lost touch with Lee and Robert for a while but we have since reconnected. Greg and I have always been close friends since Wargod.

Phil, thanks a lot for your answers! Any final thoughts for the Hungarian readers?

Thank you for your support and interest! Back in the Wargod days we actually received a few letters from Hungary. I look forward to visiting your country in the not too distant future. Thanks so much! Cheers! 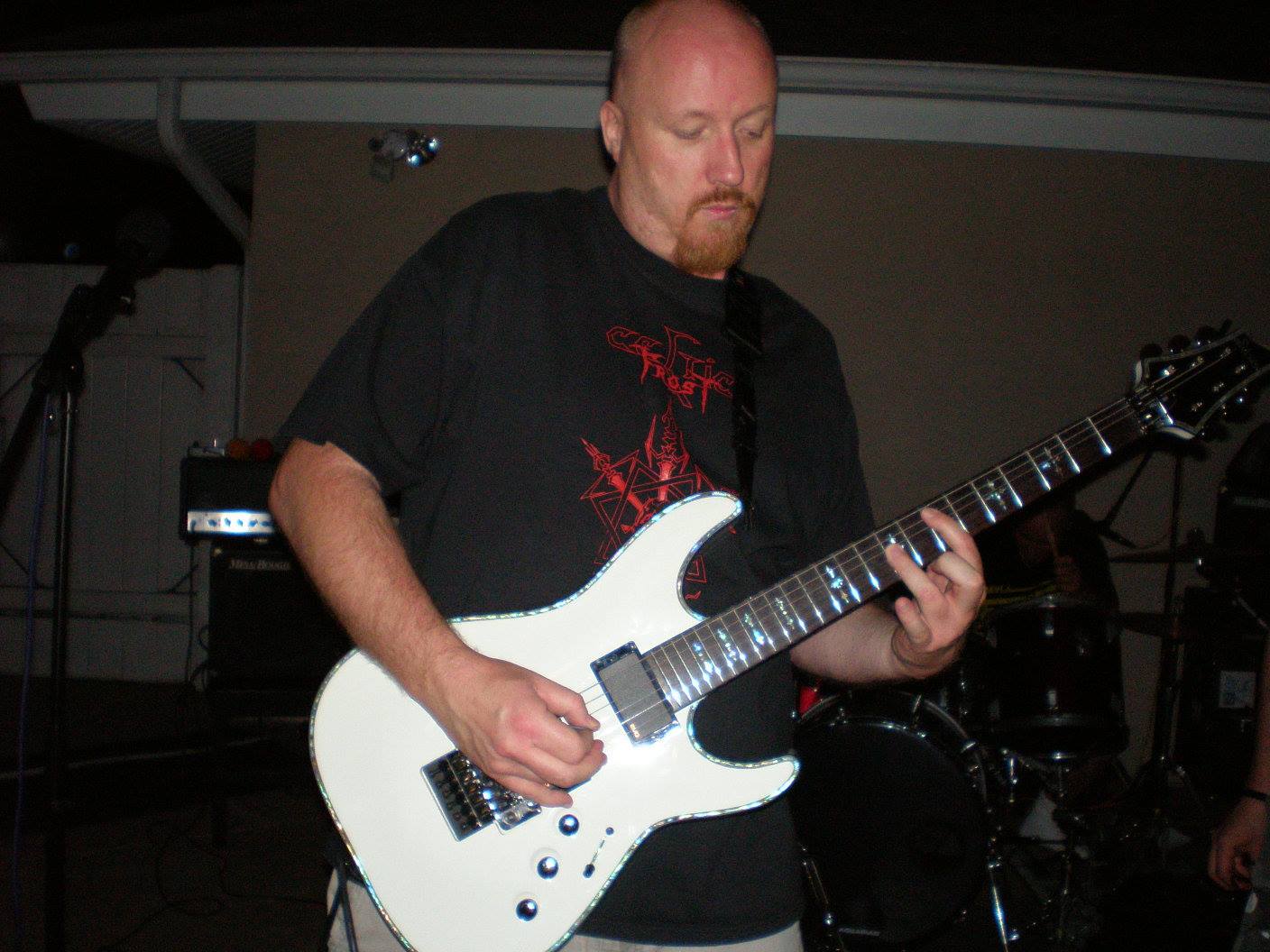