During the 80’s a lot of compilations were released by several labels, such as the famous Metal Massacre, Speed Metal Hell, Thrash Metal Atack, Beyond Metal Zone, Stars on Thrash, Born the Metalized, Iron Tyrants, New York Metal – 84 to name a few. Did they help a lot for the bands to make a name for themselves? Were these samplers good things to introduce newer bands for the fans?

Absolutely. The Metal Massacre series for sure. Those MM compilations help launch Abattoir, Armored Saint, Trouble, Slayer, Metallica, Bitch, Fates Warning and on and on…They would all play locally, too, so fans got to hear them first on vinyl, then see them live. It could have been the other way around, too. I’m sure the other compilations that you mentioned did the same thing for their featured bands.

Which year was the best for metal and why?

Ooh, its a toss up between ’83 & ’84. 1983 because of the official releases that year. 1984 because of all the demos that we got our hands on that year: Possessed, Hellhammer, Celtic Frost, Exodus, Venom, Dark Angel, Slayer, Destruction, Sodom, Bathory, Mantas/Death, Jag Panzer and so on. It was an exciting time for the birth of thrash. If the metal fans only knew what we had months before they were actually released… I’ll say 1984!

What do you recall of the fanzine world of the 80’s? There were millions of fanzines coming from worldwide, such as Shock Power, Battlefield, Blitzkrieg, Blackthorn, Phoenix Militia, Whiplash, Violent Noize, Metal Meltdown, The Book of Armageddon, the list goes on…

After BD was done in late 1985, I would read various other mags that you mentioned, but only for a short period that year. I got bored reading. I wanted to SEE bands live, not read about them. So. Cal was a great place to live because of all the clubs there.

Was it a kind of impenetrable scene? I mean, there were a very big amount of fanzines, every day or week popped up a new one…

Yeah, there were too many trying to get into the game by that time. They would cover boring bands – to me anyway.

Which fanzines did you like personally? With which fanzine editors did you have friendship, good connection/relation etc.?

I never really friended any other editors from other magazines. Like I said before, I wasn’t reading other magazines from 1985 on… I was going to a lot of shows.

Because of the big amount of fanzines, was it hard to pick up fanzines for the fans/collectors?

No. Do you mean availability? If so, It wasn’t hard to buy magazines in So. Cal. There were plenty of stores in my area. 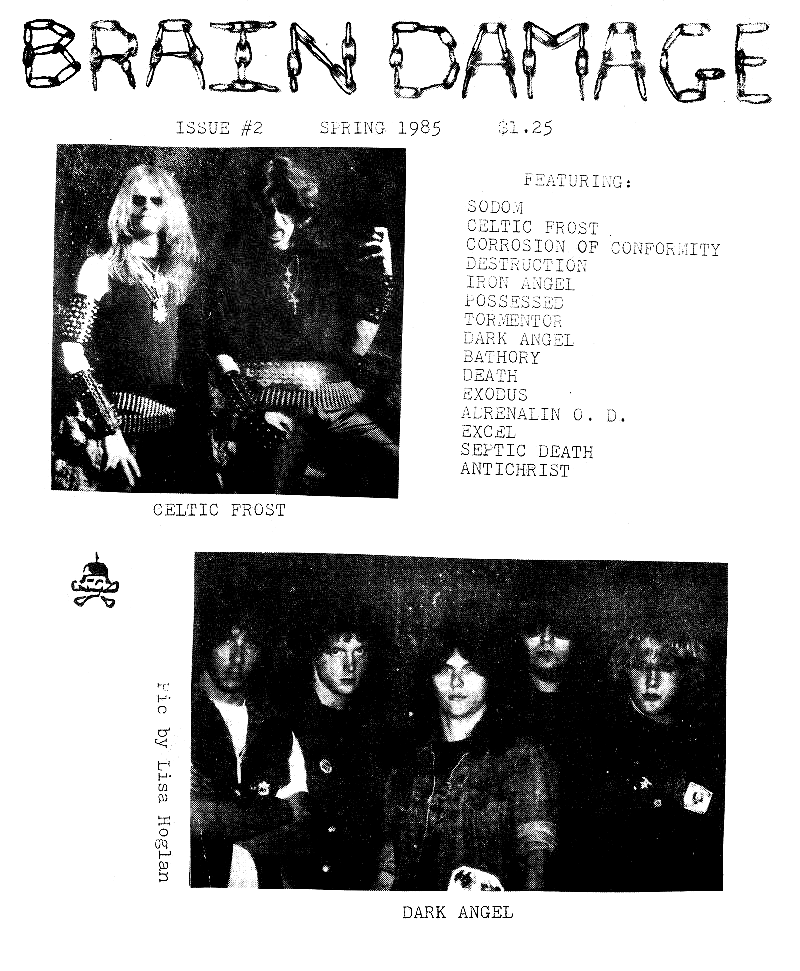 What is/was the importance of the fanzines in your opinion?

The most important thing to me about fanzines is to find out about bands! Today you can see and hear music instantly on the internet. Back then, if you lived in a city where bands never played live, then you only could find out through various magazines, like ours!

Why and when did you stop doing Brain Damage?

We never really picked a date to end BD or even talked about it. In the fall of 1985, Vadim and I entered high school. That changed things between us. I focused on my drumming, taking lessons and pursuing music classes in HS. Vadim began drumming & formed a band. He went in that direction, playing live locally etc. We lost touch and issue #3 never was started.

Did you go on writing for other fanzines/magazines? If so, in which magazines/fanzines did you take part?

I never wrote for another magazine after Brain Damage. I was focused on my drumming and lessons.

Did you remain in touch with Gene, Lisa, Mike Rubinstein and Vadim later on? Were you aware of Vadim founded Metal Storm Records?

Gene, I had a chance to catch up with about 5 years ago when he came into town with his band Meldrum. That was cool to see him again. Lisa, I’ve touched base with in recent years via e-mail. She has been a big help behind the scenes with both of Gene’s DVDs. Atomic Clock & Atomic Clock Strikes 2. Pick them up! Vadim & Mike, I lost touch with in late 1985. I was aware of Vadim and Metal Storm Records. The label’s first release was supposed to be a compilation album of local metal bands. Not sure if it was ever completed though…

How do you view Anthrax, Megadeth, Metallica and Slayer being mentioned as The Big Four of thrash metal? What’s the reason of it? Do you like their present records or only the old, classic ones?

Ah, the Big Four. I think that they get credit because they were the first to get signed and release albums in 1983. Well, except for Megadeth. You have to remember that Megadeth had written most of their debut album in 1983, too. Their demo was traded by fans in ’83 about 2 years before they would finally get a label to release it in 1985. So I think fans accepted them because their music was already out in demo form.

With Exodus, Bonded by Blood demo was recorded in 1984 and traded during that year as well until Combat signed both bands. I wish they released BBB in 1984, then they might have been included as the Big Five! I still like all 5 of those bands. I’ve purchased everyone of their albums in the last 33 years. Metallica being my least favorite currently of these 5 bands. Anthrax – For All Kings, Megadeth – End Game & Thirteen, Slayer – God Hates Us All & Repentless, Exodus – Tempo of the Damned & Shovel Headed Killing Machine have been my favorites from those bands since their classic albums in the 80’s. Heavy, heavy stuff.

What are the most underrated thrash metal bands in your opinion? Why did it fail them to be bigger?

I always thought and hoped that Tank, Raven & Anvil would have made it bigger. I love those early albums from each of them. Tank never made an effort to tour the U.S. They supported Metallica briefly in ’84, but that was it. Raven I saw on the Kill ’Em All for One tour. Great show. The first 3 Anvil albums should have sold more in the U.S. but I think the planets didn’t line up for them and Raven. Timing and location (Canada /Anvil) probably had something to do with it. I was always routing for Possessed to write killer, heavy stuff too in the mid 80’s. Seven Churches was such a great album. Unfortunately, they didn’t continue to and also had problems within the band. Too bad.

In your opinion, did the scene become oversaturated at the late 80’s/early 90’s? How did you view/like the grunge, pop/punk and nu metal scene later on?

Yes it did indeed. I embraced the grunge era only because it had roots of old metal, not thrash & speed, but a taste of heaviness. I remember where I was in late ’91 when Nirvana’s Teen Spirit video was a Buzz Worthy video on MTV. I heard the heavy chords and stopped what I was doing. It was refreshing to hear something loud & heavy that wasn’t Anthrax – Persistence of Time or Pantera – Cowboys from Hell. 1991–1996 were good years for grunge. Some decent albums came from the big four of grunge (Pearl Jam, Nirvana, AIC, Soundgarden). Pantera, Anthrax & Slayer kept me going through the 90’s until the 2000’s when I would discover Burn the Priest, Lamb Of God, Killswitch, Shadows Fall and other nu American metal bands. It was refreshing to me. 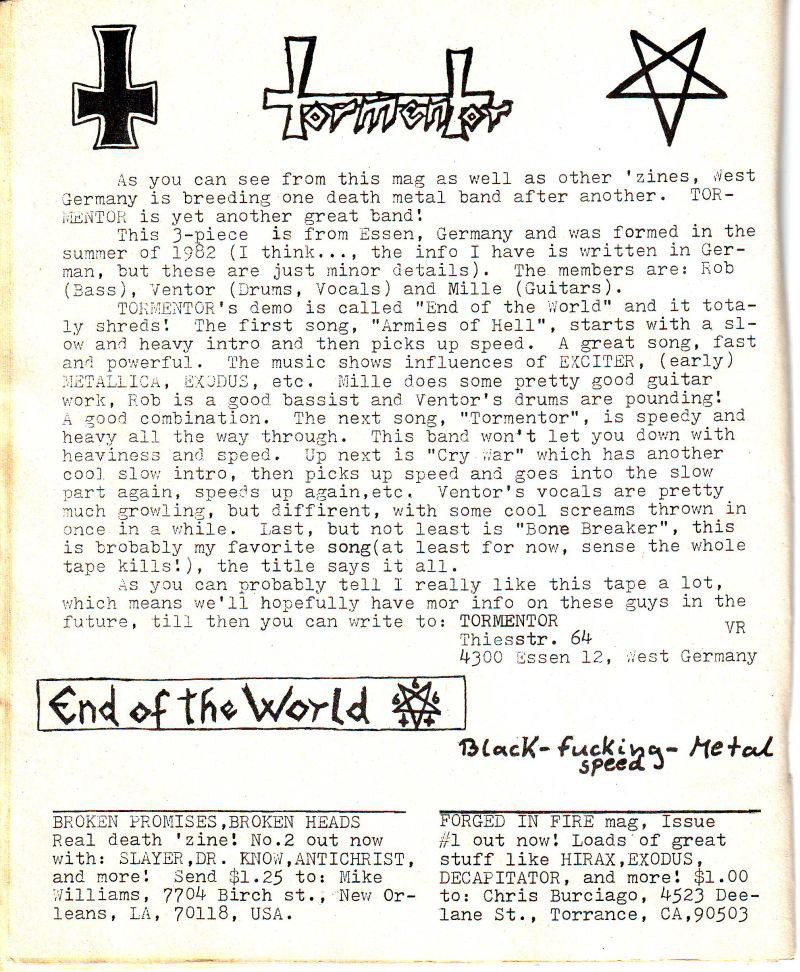 Did all of these type of music kill the traditional metal? Did these movements force a lot of bands to change their style/music drastically and turn their backs on metal and their fans?

I don’t think so. Any classic 80’s band will and have stood the test of time. There were a lot of bands in the 2000’s that copied what was popular at the time, but Lamb Of God and others survived because of their consistent writing of great albums. What was different in a good way was Strapping Young Lad. One of Gene Hoglan’s bands with Devin Townsend. Listen to their discography with a killer live album and live DVD, For Those Aboot to Rock. (not mispelled). Some of Gene’s best drumming. They were different, but were fun to watch and listen, too. Great stuff!

By the way, what do you think about the reformation of cult, classic bands, such as Artillery, Onslaught, Metal Church, Death Angel, Heathen, Possessed, Necrodeath etc., that happened in the last 10-15 years?

It’s not the same to me. Didn’t pay much attention to those bands since the 80’s really.

Are you still proud of Brain Damage these days? Who were your best friends from the scene? Are you still in touch with them?

Brain Damage hasn’t been on mind in years except about 8 years ago I saw a copy of it on eBay. I don’t have any official copies anymore (my dad didn’t know and threw away a box of various copies after I moved out of the house), so I followed the auction. I couldn’t pay the $125 is sold for. I couldn’t believe it! I haven’t seen one since. So yeah, I’m proud to have been a part of the whole experience. I also appreciate you having an interest in it, too.

Do you still keep an eye on what’s going on in the underground? How do you view the scene these days?

I do not keep up with what’s current in the underground.

What do you think about the Internet and the downloading/mp3 files as a whole?

The internet is great for finding info on bands almost immediately. That’s great. It has probably hurt magazine sales though. As far as downloading, I’m old school so I still want the product in my hand. Whether it being an LP or CD, I still want the artwork & booklets. That is just the collector in me. As for the CD, I could just import into my Itunes and have both the mp3 as well as the physical product.

How do you view the webzines? Do you often read them?

My last question: please list us your first ten all time favourite records, gigs and album cover artworks! Please, tag your thoughts/opinions onto your lists!

Favorite gigs: Iron Maiden/Saxon/Fastway, June of 1983, Long Beach arena. I was 12. This was my first concert. Any Motorhead gigs. Saw them about 9 times. Any Rush show. R40 in 2015 was probably my favorite. Seeing Slayer, Megadeth, W.A.S.P, Dark Angel, Hirax, Possessed, C.O.C. or Exodus in small clubs during 1984 would have to complete my list. 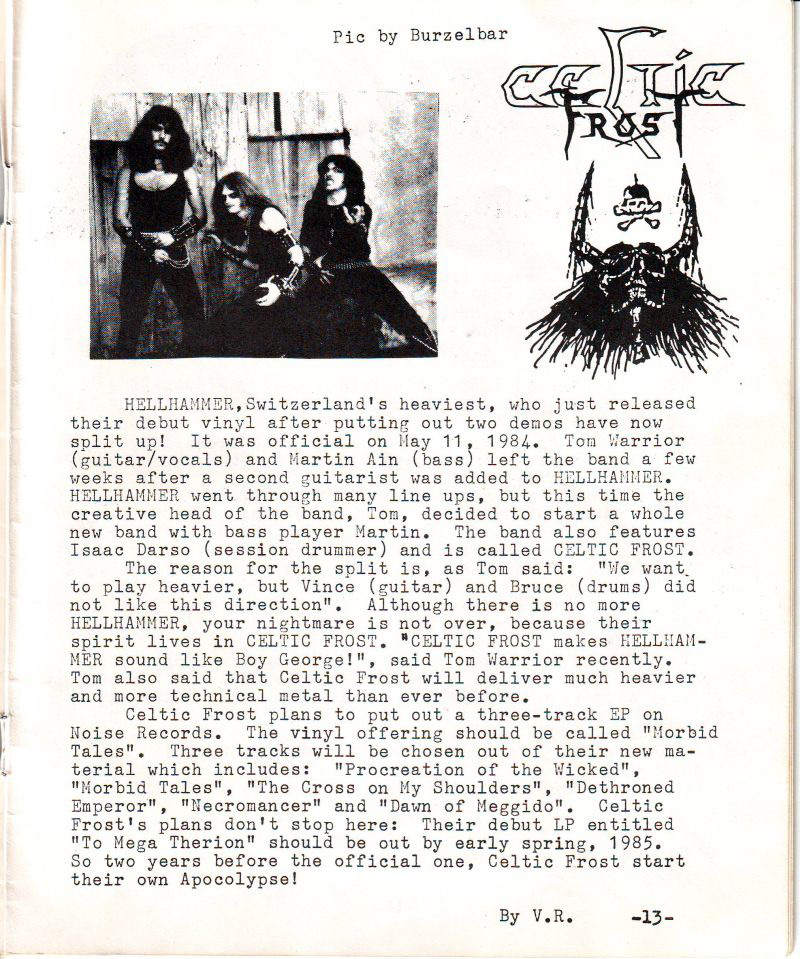 Thanks a lot Ron for wasting your time to do this feature. Anything to add, that I didn’t cover?

Well, thanks again for your interest in BD after all of these years! I hope your readers like the history and stories that I have shared in this interview. Vadim, Gene and I didn’t realize the impact it would have on the history of death fanzines across the world (if any at all). I guess we were one of the first to cover such heavy bands before they had their official releases. We were only 14 & 17 years old respectively, but we were FANS of this genre first, then editors!

The Brain Damage issues can be downloaded from here: sendbackmystamps.org