L. D.: You also featured both on At Death’s Door (with Burnt Identity) and on Rock Hard Presents Monsters of Death (with Opportunity Is Gone) compilations. Did these open more doors for Morgoth and help the band getting more fans?

H. B.: I would’t say that they opened any doors for us. These were just compilations – nothing more and nothing less.

M. G.: Well, I never really knew how much impact these compilations had internationally, but even when I was in Australia a couple of years ago, people said: Yeah, I know Morgoth, because of that compilations… So it internationally was great to be on there and got the band known to people all around the world.

L. D.: During early 1993 you entered the Woodhouse studios to record your second effort Odium. Were you prepared for this album? What about the recording sessions?

H. B.: Of course we were prepared. The recording sessions were great and we had a really good time during recording Odium.

M. G.: We did a lot of touring with the Cursed album and after we came back from touring unfortunately lost our reahearsal room, that was located in an old slaughterhouse. So for the Odium we wrote the songs in different locations. First we rented out a hut in the mountains, which was really productive, and then we relocated the whole band to Dortmund into an industrial area, so I guess you can actually hear those influences of the habitat on Odium. It has definately some different flavours on it…

L. D.: Would you say that the death metal scene was oversaturated those time?

H. B.: Yes, today I think so. Death metal became more and more popular over the years and I think that it reached it’s peak in the mid 90’s.

M. G.: There where so many bands all of a sudden. And a lot of them just sounded not very interesting and exciting. 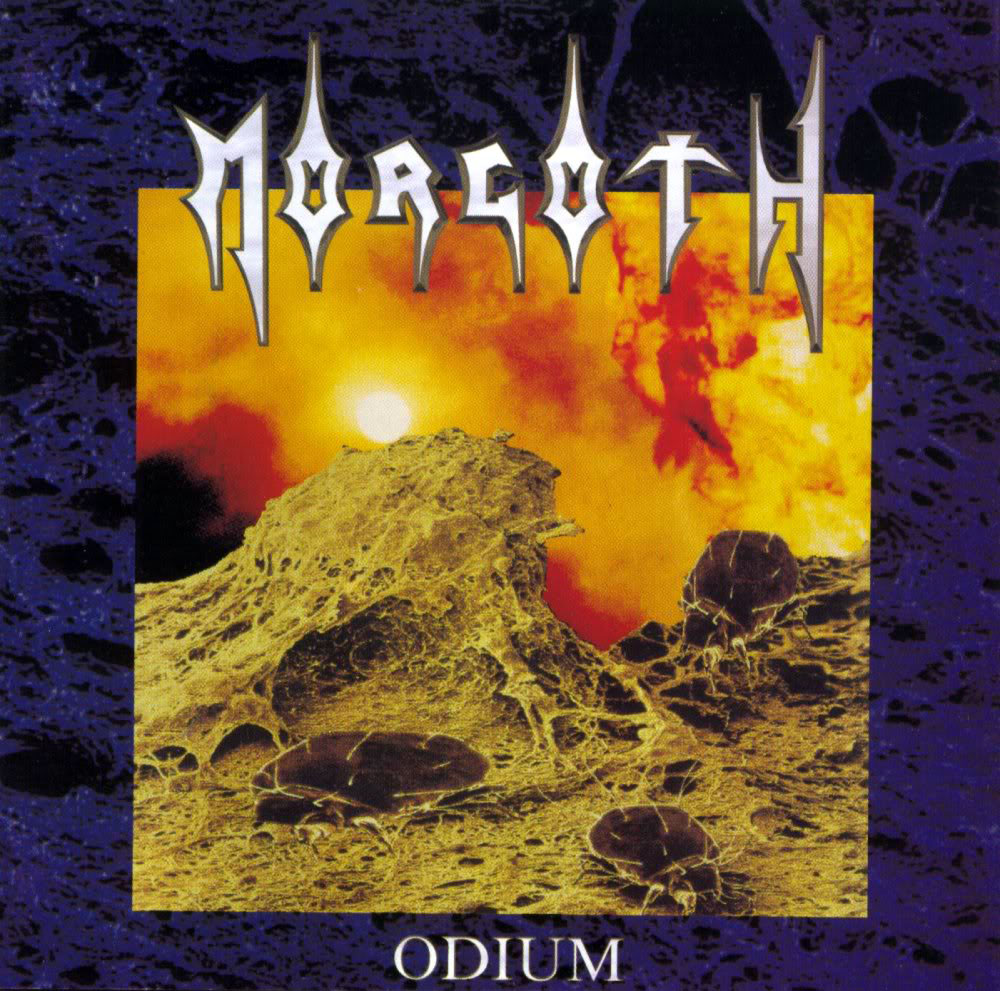 L. D.: Do you agree with that Odium is very similar to what Kreator did with Renewal? Did you pound out a death metal record sprinkled with industrial influences and challenge the mind of the listener?

H. B.: We didn’t plan to do a death metal album with industrial influences when we wrote”Odium. (The only album we “planned” before was Ungod, because after a break of almost 20 years, we wanted to release a true death metal record.) All the other records were a reflection of what we liked at that time. They are a reflection of the music, the movies, the books and the art, that we were into at that time.

When we wrote Odium, we listened to industrial bands like Ministry or Nine Inch Nails a lot. We liked the coldness and the marching machine similar sound of industrial music and integrated this style in our own music. But this happened unconsciously and it was not deliberately planned.

M. G.: Mmh, yeah maybe… In 1993 we were not interested in listening to many death metal bands that did not give us any new influences. We all moved on with our musical tastes and I guess that´s what you can also hear on Odium…

L. D.: Does it mean that your musical horizon dilated and you discovered newer music?

H. B.: Our musical influences changed over the years a lot and of course you could hear that on our albums.

L. D.: Did Odium become more varied than Cursed? What were the biggest differences compared to the first album?

H. B.: I think the songs on Odium are more technical and complex than they were on Cursed. After the many concerts and rehearsals we improved a lot and I think that is quite audible on Odium. The other thing is that we experimented a lot with new sounds and samples to create a certain athmosphere. And also Marc’s voice was more variable than it was before.

M. G.: I guess the most obvious thing is, that Odium is not just a classic death metal album anymore, which the ones before definately were. There are these flavours of industrial and all sorts of other influences and moods in it…

L. D.: Are the song structures slowed down and are there weird eerie sections and effects? Did the music move into a kind of progressive direction?

M. G.: Yes, we just said to ourselves that we did not want to produce a „Cursed Pt. II” album… We wanted to develope and also CM did not put any pressure on us to deliver just a classic DM album… It was more experimenting with different moods and tools like a sample machine, that we bought. 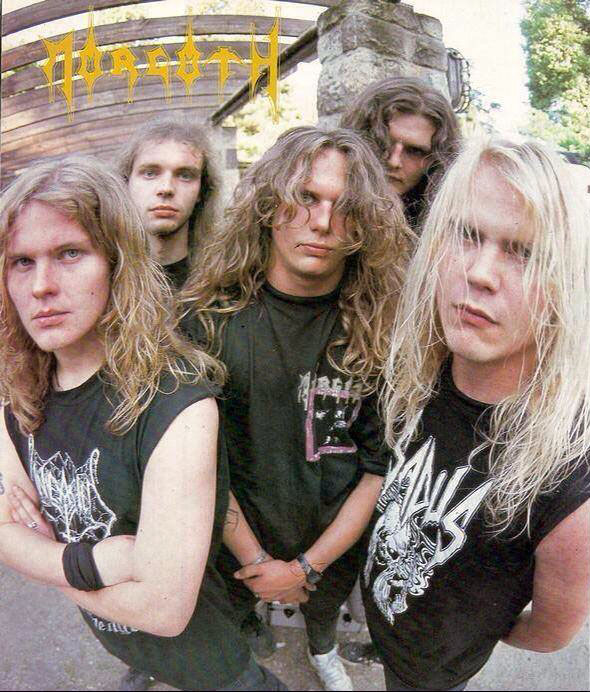 L. D.: Is the album solid from start to finish and sets a grim and desolate picture of a world crumbling away into the abyss of space?

H. B.: Ha! That gets to the heart of it. I could not have said that better. At that time, a lot of things happened in the world. Many songs were written under the impressions we had at that time. There was this terrible outbreak on the Balkan conflict and the Second Golf War. The Tschernobyl catastrophe was not too far away. Times were changing back then and often enough not only for the better.

M. G.: Well, at least that was the intention behind the whole process of writing it. A dark, desoltate future that is going to rise…and finally transports crumbled mankind back into space.

L. D.: Does the music have an unsettling, dark atmosphere? Did you want to do a unique album?

H. B.: We always wanted to do something unique. I think Odium has a very special atmosphere. It’s raw and brutal on one side, but it’s very creepy and disastrous at the same time. I think this mixture it is that makes Odium a very unique album.

M. G.: Absolutely right! It´s mostly atmospheres that still interests me nowadays if I listen to albums. It has to have some certain thing that grabs you and puts you on to a musical journey.

L. D.: How do you explain that you decided to continue along the death metal path, however, you incorporated industrial parts, sounds as well as some polyrhythmic drumming during some midpaced moments?

H. B.: Like I said before. The music we do is always a reflection of our personal lifes. It’s always a journey from the past to the present. And so it was with Odium as well.

M. G.: Well the DM background is of course the dominant part of Morgoth, but as I said before, all bandmembers had their personal influences musically and spiced it into the sound.

L. D.: You did a videoclip for Under the Surface, was it often rotated in Headbanger’s Ball?

H. B.: Yes, it was very present and we got a lot of attention from it.

M. G.: The clip was done by Carsten Otterbach’s girlfriend, who was an art-school and film student back then. It took many, many hours to get the video done with the stop-motion technique. I was trapped under that camera for days, hehe!

L. D.: Were the fans surprised as far as the music goes? Did wait for a next Cursed or…?

H. B.: I think the fans were a bit of surprised at first. But they followed the path we took very quick and a lot of our fans liked Odium just because of the unexpected things we did.

M. G.: You could tell, that there were some people who were disappointed that it wasn´t „Cursed Pt. II”, but hey, I think music always has to be 100% honest. We could have easlily done a Pt. II and go the safe way, but we wanted to develope ourselves as a band and were curious to see what we could do with this…

L. D.: What about the sales? Were all of you satisfied with the results in the end?

H. B.: The sales were really good and we were really proud when we holded the result the first time in our hands.

M. G.: Well, I don´t count success in sales… Sales wasn´t as successful as Cursed, but I guess that was also because we did not tour that much for that album.

L. D.: Would you something change on the record these days?

H. B.: No way. Today it would sound completely different, of course. But just the „imperfection” of the sound provides this album it very unique atmosphere.

M. G.: Back then I think the low end on the record was a bit lacking, but CMR put out a remastered version some years ago that sounds ways better in those terms. No, I wouldn´t change anything really…it was a great picture of the time…how we felt and what concered us…

L. D.: What were the shows/tours in support of the album? Can you tell us more about it?

M. G.: We just did one tour in Europe and a couple of festivals…that was it… unfortunately…

L. D.: Did Odium stand the test of time?

H. B.: I think it definitely did. It was quite unfamiliar for the fans at the beginning, because of it’s industrial influences and Marc’s voice at certain parts. But I think that’s exactly what made the difference to other death metal releases at that time and I think exactly this difference is the reason why Odium is still very popular among our fans.

M. G.: Yes!!! The only thing I would change nowadays is the artwork…

L. D.: Guys, thanks a lot for your answers! Anything add to mention that I forgot to cover?

M. G.: Nothing I could think of… Thanks, Laszlo! And hail to the Hungarian metalheads!!!