I don’t need to write any introduction, the Master, the Legend answered my questions! (It happened after Possessed’s gig in Dürer Kert, Budapest, on the 7th of August, 2017)

László Dávid: Thank you for this awesome show, Jeff. You’re here in Hungary for the first time. How do you feel about it?

Jeff: We’ve had an amazing crowd and an amazing time, so far this is the best show of this tour.

L. D.: Two days ago you’ve played at the Wacken Open Air in Germany. How did that show go?

Jeff: It was good. We’ve had some little technical difficulties, monitor related. We have our soundman today and he works a lot more seriously. But it was a great show and we’ve had a great time.

L. D.: Was that the opening gig of the tour?

Jeff: Yes, it was the first gig of the tour.

L. D.: But it was the second time you’ve played Wacken, is that correct?

L. D.: You’ve signed a deal with Nuclear Blast in May. How did it happen?

Jeff: Well, from what I hear, they got a hold of our demo tape with five songs and they loved it. They sent the tape to Markus, owner of Nuclear Blast, and he said “Christmas has come early, the eighth church is here, sign them now!” I also heard that for the past four years, Kirk Hammett of Metallica has been after Nuclear Blast suggesting them signing Possessed. 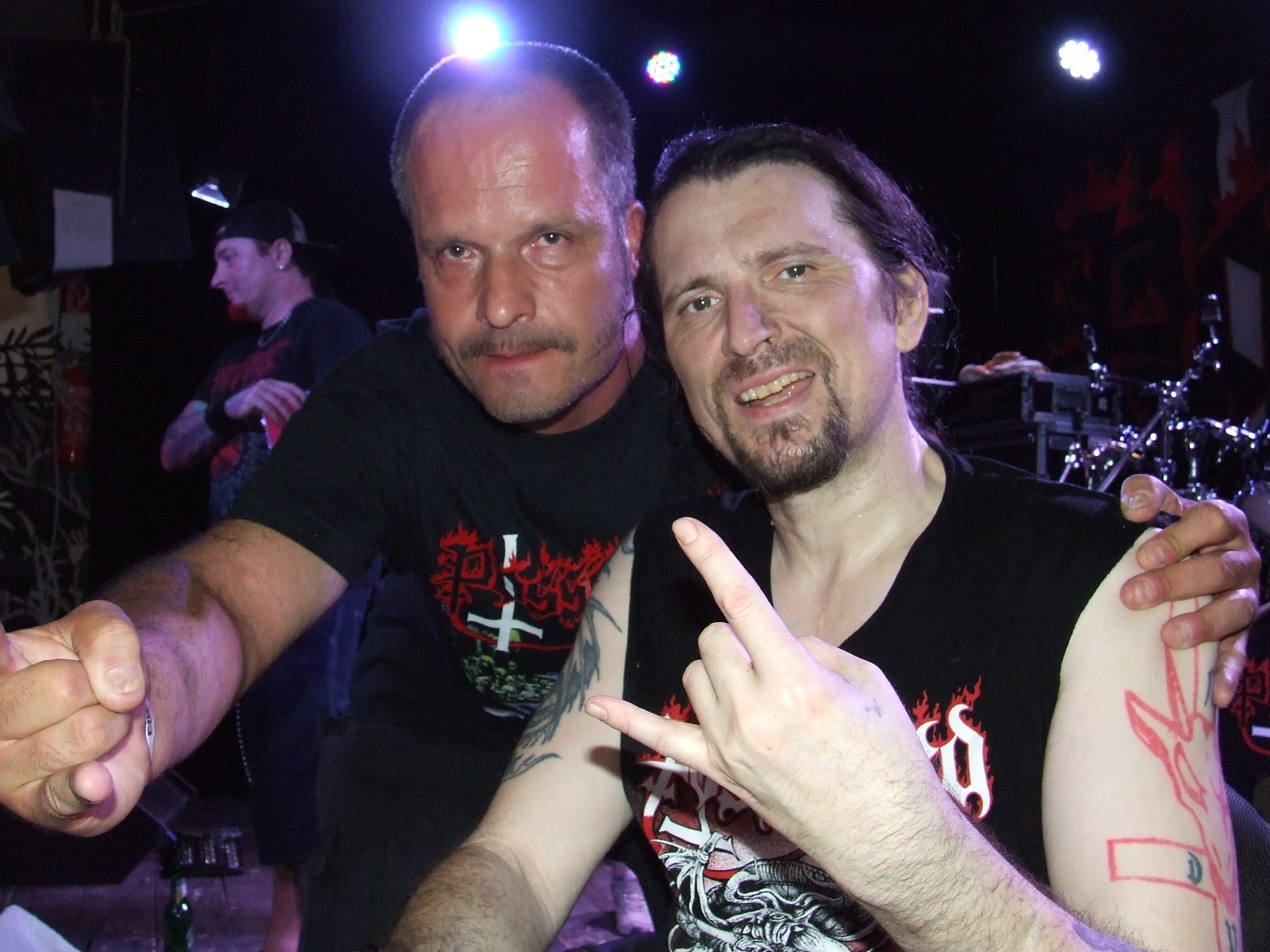 Jeff: There were plenty of them.

L. D.: How does the songwriting process go in the band?

Jeff: I’m writing a lot of the new music and I write all the lyrics. And Dan is writing music as well. I have written at least four songs and Dan has written three so far.

L. D.: How many songs will there be on the record?

Jeff: Everything is brand new.

L. D.: You did a tour over Europe with Belphegor and Absu last December. How is it that you couldn’t make it to Hungary then?

Jeff: I don’t know, it has to do with our tour booking and management company. Maybe there wasn’t any offer. We can only go where we’re offered.

L. D.: Let me ask you about an old story. Is it true that the Exodus guys were the ones who brought your demo tape to the attention of Brian Slagel of Metal Blade? 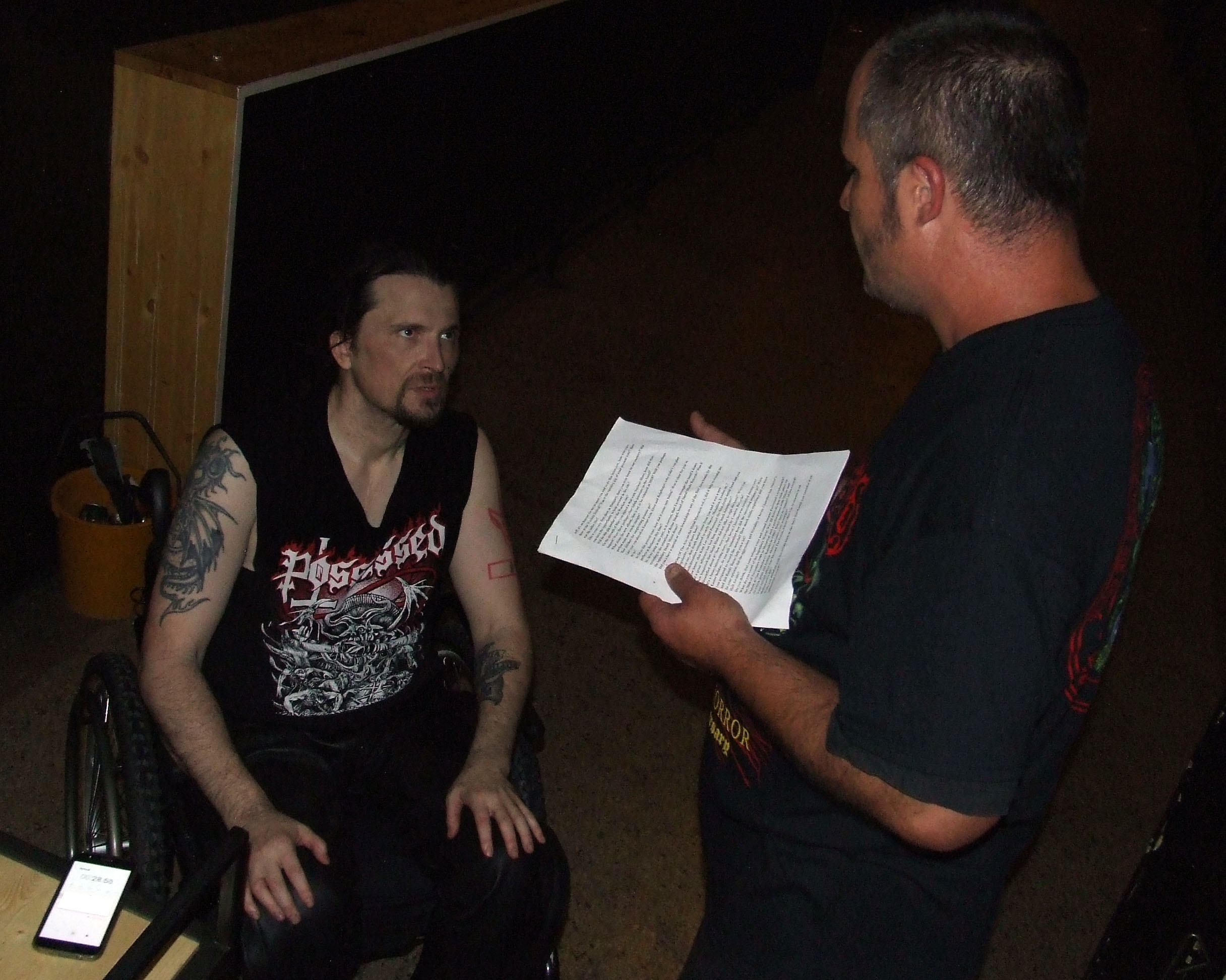 L. D.: So there was a very special, close friendship between you and the Bay Area bands.

Jeff: Yeah, Exodus, Metallica, all of them basically. All the Bay Area metal bands were very, very close. We all supported each other, we used to hang out with all those guys. Death Angel, Attitude Adjustment…

L. D.: You were the one who came up with the term death metal, is that correct?

Jeff: Yeah, we invented that term because we were playing something that was faster, heavier and different. And we said “Oh black metal’s taken, speed metal’s taken, thrash metal’s taken, we want to be known as the only death metal band.” We thought that Possessed would call itself death metal, we wrote the anthem Death Metal and I honestly thought that Possessed would be known as the only death metal band in the world. But then it actually became a genre and I thought it was very honoring, it was awesome.

L. D.: Would you say you’ve had a totally new approach and direction as compared to the early Metallica, Slayer or Exodus?

Jeff: I think it was completely different animal. Much different, much faster, much darker and much more over the place.

L. D.: Even Kam Lee of Massacre called Possessed the first death metal band that had influenced both him and Chuck Schuldiner.

Jeff: Well, the fact is that Chuck’s first band, Mantas was an Iron Maiden and Judas Priest cover band. But then Chuck heard what I was doing and he actually moved out to be around me and I kind of mentored him. Then two years later when he made his first album, he used Randy Burns who produced our album and he took a great influence. I remember him coming to me and saying “Listen Jeff, I sound exactly like you.” And he was proud of that, he was proud of the fact that Possessed was his No 1 influence. So me and Chuck were very good friends. 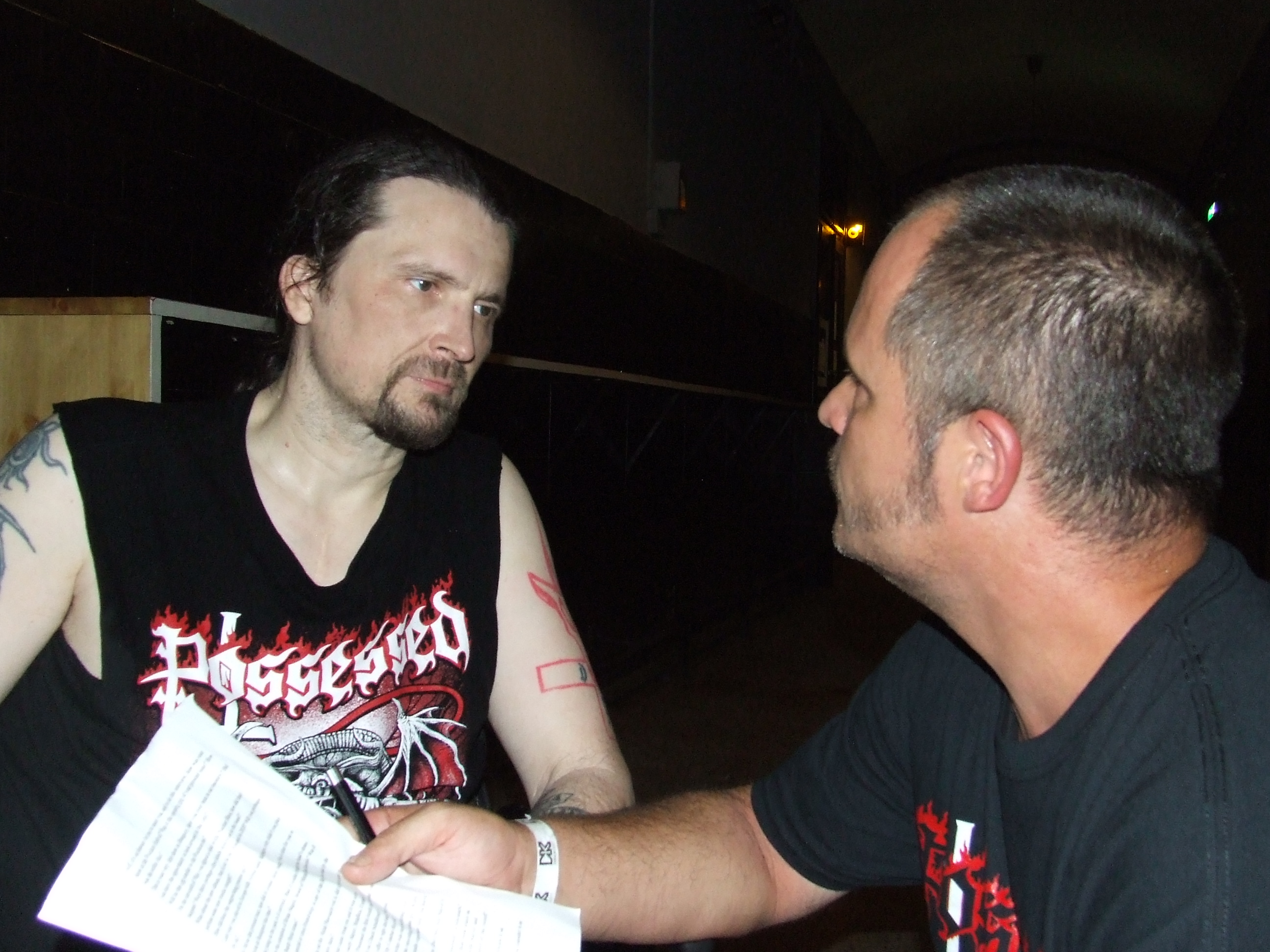 L. D.: Seven Churches was recorded during Spring Break. You were high school kids back then. What do you remember of the recording process?

Jeff: We moved to Prairie Sun in Cotati and we stayed there for a couple of weeks recording. During our break, we went to party with the band Blue Cheer. We went partying hard with them and we had a very good time. The original mix was a monster, it sounded awesome. Then Carl came down and mastered it and he toned everything down for some reason. But I think it still works, it’s still my favorite album.

L. D.: Did you have any studio experience by that time? Were you well prepared for the studio sessions? Did Randy Burns really help you much with the recording?

Jeff: As far as Seven Churches, we basically played it as a live album. We nailed it through first or second take and it was very good. I locked all the windows, had a 151 Bacardi, four types of wine coolers and a bit of methamphetamine and I just got fucked up. I turned on the red light with nobody seeing me and I just fucking worshipped the devil. It was really heavy.

L. D.: After the record got released, you played your very first show outside of the States which was the legendary WWIII Festival in Montreal. Can you tell us about it?

Jeff: Well, we had been playing since 1983 so by the time we came over in ’87 we were ready to go and it was a beautiful experience. The crowd was very awesome and we did really well.

L. D.: I understand you played at the Kabuki Theater in San Francisco with Venom and Slayer in early 1986. 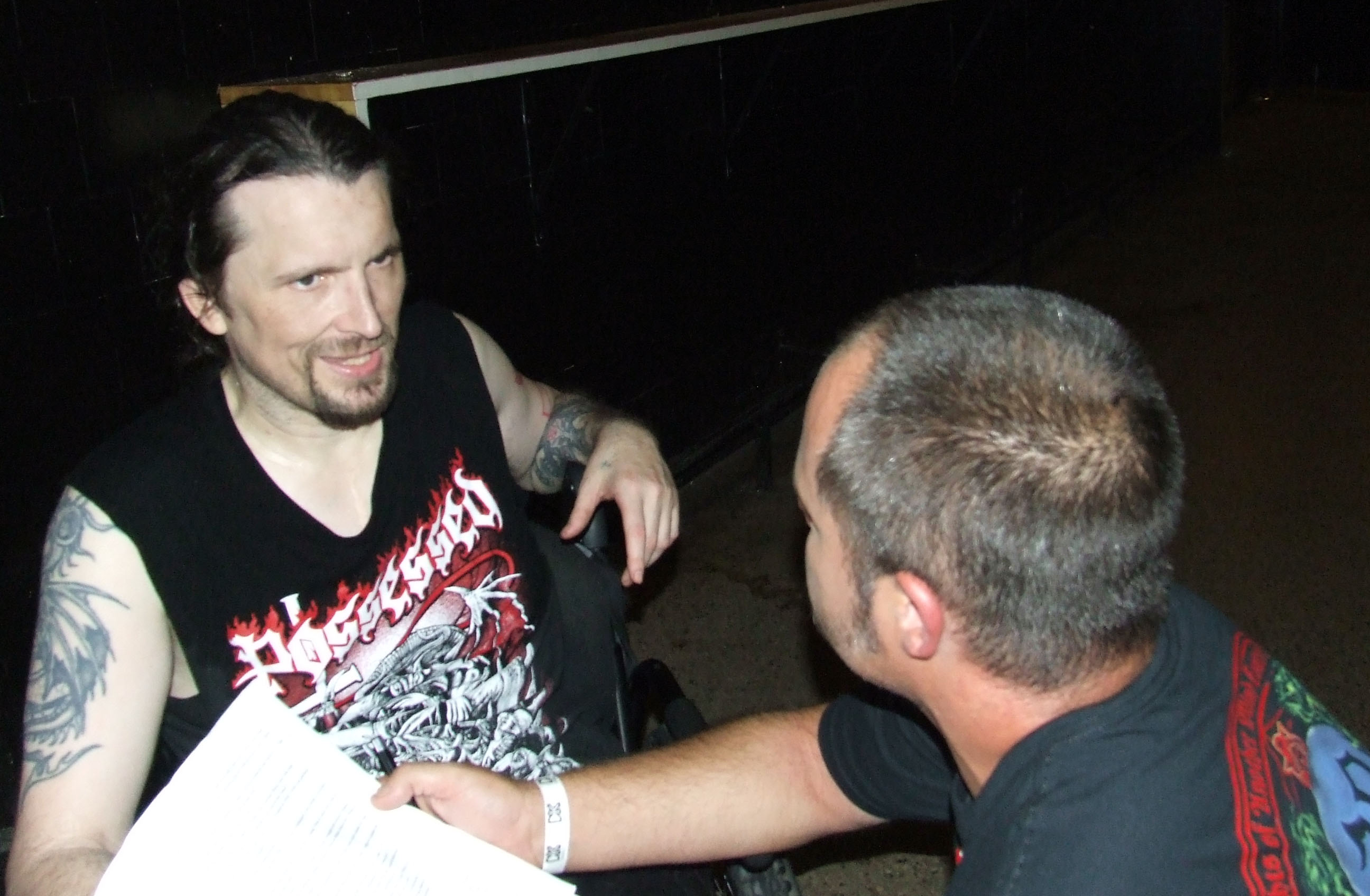 L. D.: Whose idea was it to release Beyond the Gates on Halloween?

Jeff: That was under the record contract with Combat that we had to make an album every year and that was our second of three. We did two albums and an EP.

L. D.: You played your very first European shows with Deathrow and Voivod after that, is that correct?

Jeff: Yes, it was a great tour.

L. D.: What about the Gates of Darkness Tour with Dark Angel?

Jeff: Oh yeah, that was fun. 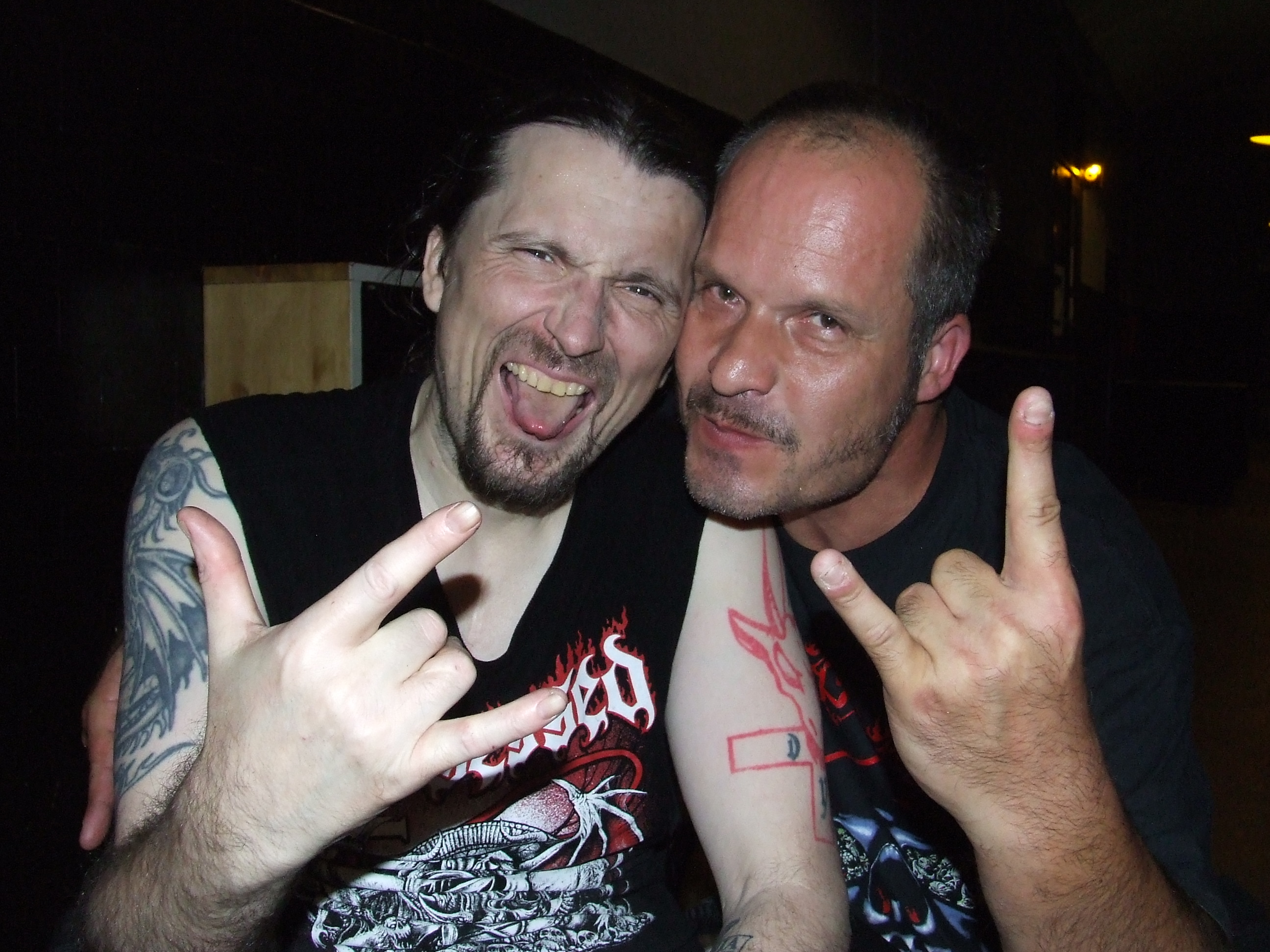 L. D.: Would you say that the unique sound and your voice were the trademarks of Possessed?

Jeff: Yeah, we just wanted to do something we believed was different. There was a lot of hair bands and stuff like that and we wanted to be an archetype in music. And we just played what we wanted to do. We loved punk rock at that time. T.S.O.L., Agent Orange, Discharge… The archetype of metal was the scene of punk rock.

L. D.: How did Joe Satriani become the producer of The Eyes of Horror EP?

Jeff: He was a good friend of ours and he used to give lessons in music. He gave lessons to Larry and he asked him to do it. He said he would do it for six thousand dollars. We learned a lot from him. We used to do everything in analog back then. We learned how to turn tapes backwards and how to fuck with all that. It was a very unique process.

L. D.: Would you say your music became more diverse on Beyond the Gates and The Eyes of Horror?

Jeff: Yeah, we didn’t want to get pigeon holed. We didn’t just want to be super fast, we wanted to cover a larger spectrum with those. That’s why I think today that Possessed is the truest in its kind because a lot of death metal bands nowadays have their certain specific set of rules. So it was a conscious decision to try to widen our spectrum.

L. D.: Are you still in touch with the former band members?

Jeff: I’m in touch with Larry through his mom. They made a conscious decision that they don’t want to tour anymore and they don’t want to play in Possessed anymore and so I had to move on. I don’t dislike them we just don’t talk that much and they’re doing their own thing. Larry’s in Primus, Mike Sus no longer plays and Mike Torrao just plays for fun.