The Swedish thrash scene was overlooked during the 80’s, although several cool thrash acts were coming from the country, such as Merciless, Agony, Mezzrow or Fallen Angel. Leprosy from Helsingborg (formerly known as Sadistic Pain) was a short lived band that manage to release two demos and a rehearsal tape. For two years ago To The Death Records released the Death to This World compilation, that contains the band’s two demos. Former drummer Niclas “Nicke” Olsson told us the entire story about the band.

Laszlo David: So Nicke, Leprosy was formed in 1987 as Sadistic Pain by you on drums and Christian „Damen” Carlsson (R.I.P.) on bass/vocals. Do you still remember, how did you get together? Did you perhaps know each other earlier? Were you close friends or school mates?

Nicke: I found Christian „Damen” Carlsson in another band I don´t remember the name on a Youthgard and I knew Mange Liljetoft through another friend who had a record store and we formed Sadistic Pain.

L. D.: At which point did the line up become complete? When did guitarists Magnus Liljetoft, Patrik Svärd and vocalist Patrik Olofsson join the band?

Nicke: We had a rehearsal room under the record store and me, Mange and Damen started to create songs there. Mange had a friend called Patrik ”Peo” Olofsson. Peo had not sing before but we tried him in the band and he kicked really hard and he was the right person for the band. Patrik ”Svärra” Svärd asked us to help and play solos on the first demo ”Death to this world” and after the recording we asked him to join the band and he said yes. 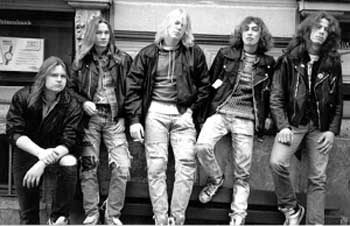 L. D.: Was Sadistic Pain the very first band experience for all of you or have you been involved in small, tiny acts before?

Nicke: I have played in a few local bands before and the other guys too.

L. D.: How did you opt the music, that you wanted to play? Which bands would you cite as your most important musical influences?

Nicke: Leprosy manager Thomas Wilms introduced me speed and thrash metal and the most important band for me when I created music was Sepultura, Death & Obituary.

L. D.: Have you ever recorded any demos, rehearsals as Sadistic Pain?

Nicke: We recorded some rehearsal with Sadistic Pain but I don’t think none of us has them anymore.

L. D.: Is it correct, that your style was thrash metal with brutal vocals, that hinted at death metal?

L. D.: Around this time happened the great Swedish death metal boom, a lot of bands started popping up trying to make a name for themselves, such as Nihilist, Carnage, Grotesque, Mefisto, Morbid etc. Were you familiar with the underground? I mean, were you deeply involved in what was going on at this point in Sweden?

Nicke: We listened to the early Entombed, Mefisto, Damien etc. but we found our own style and didn’t copy the Stockholm death metal bands and I’m very happy over that.

L. D.: You came from Helsingborg, how was the metal scene in your town, in your area?

Nicke: We had a few band in Helsingborg this time called God BC & Hysteriah.

L. D.: How do you view, did the thrash bands overshadow by the death metal movement? How about bands such as Merciless, Tribulation, Mezzrow or Agony?

Nicke: We hadn’t problem with that, I liked these bands and bought their records.

L. D.: Before the release of your first demo tape the band name was changed to Leprosy. Did it perhaps inspire the second Death record?

Nicke: We changed our name before Death released the Leprosy album. It was really funny for us, when the album came out, we had a big laugh of that.

L. D.: What can you tell us about your rehearsals? Did you take the band seriously?

Nicke: We practiced and recorded in the rehearsal very serious. But we lived a rock ’n’ roll life, so when we played live we drank and took a lot of drugs that time. None of us did that, the most serious person in the band was Svärra. We didn’t understand what went with Leprosy. I learnt a lot from the mistakes we did that time and in my future bands which I played with.

L. D.: Did you start writing originals right from the start or were you jamming mostly on covers?

Nicke: We played some Metallica, Death and Sodom covers but we wrote our own music, too.

L. D.: How about the songwriting process?

Nicke: Me and Svärra made the most music and Peo wrote the all lyrics in Leprosy.

L. D.: In November 1988 you recorded your first demo, called Death to This World. How was it recorded? Did you record it in a studio or in your rehearsal room?

Nicke: Death to This world & Full of Hate we recorded in a studio in Landskrona outside Helsingborg.

L. D.: Could you give us details regarding on the demo?

Nicke: I can say I was really fucked up when I recorded this both demos and when I listen to them today I say to myself: How could I play so good when I was so fucked up with alcohol & other drugs?

L. D.: Both you and Damen did backing vocals, was it because to make the music more brutal or…?

Nicke: Yes, Damen sang backing vocals on the concerts, me and Svärra sang at the demos.

L. D.: Did the songs have a more thrash metal approach than your later material?

Nicke: Yes, Death to This World was more thrash metal and Full of Hate was more death metal.

L. D.: After the releasing of the demo Miko Mattson joined the band to replace Damen. What happened with him?

Nicke: Yes, Damen chose the drugs instead of the band and Micko Mattson was a closed friend of us so we asked him to join us.

L. D.: Were there any personal and musical issues, differences?

Nicke: The problem was that some of us chose the drugs and we got in jail and after that we splitted up the band.

L. D.: How did Miko get in the picture by the way? Was he the first choice of the band or did you audition other musicians, too?

Nicke: He was the first choice and we had no audition. 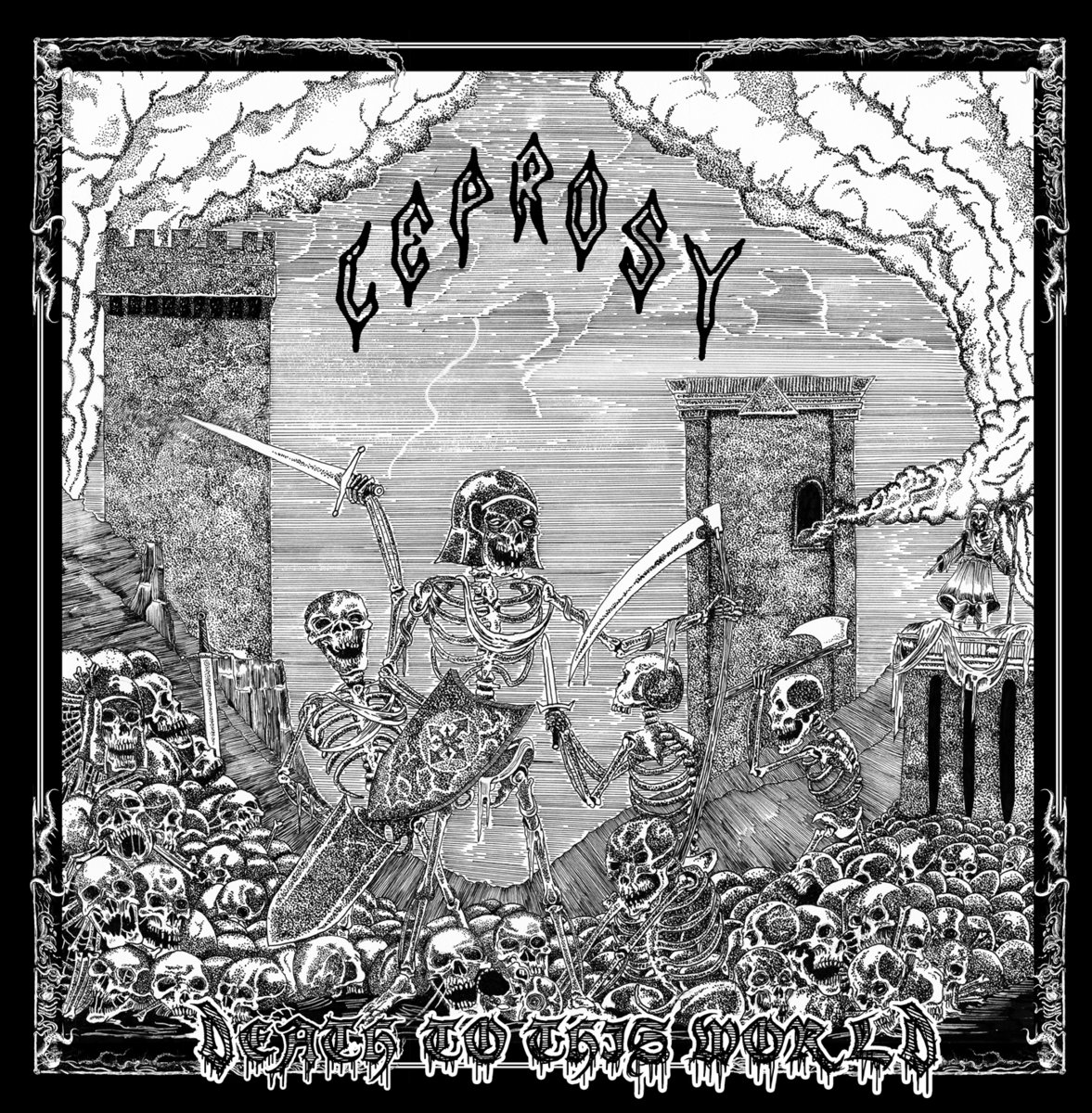 L. D.: What about his musical background?

L. D.: A sad event happened, Damen has passed away. What happened with him exactly? I think it was a big loss for you…

Nicke: When he died I lived in Stockholm and I had no contact with anybody in the band. I was very sad over his death and he was a really good friend but the drugs took his life and then I chose to stop using drugs and to be clean.

L. D.: In 1990 came out your second demo Full of Hate. How did the recording sessions go with this effort?

Nicke: We recorded this demo also in Landskrona and we did it like the first one.

L. D.: In your opinion, were there any similarities, differences between both tapes?

Nicke: No, we did it on the same way.

L. D.: Did you develope compared to the first demo? Was it a better representation of the band?

Nicke: The second demo was more brutal and more death metal than the first one. Full of Hate demo was what Leprosy is had to be.

L. D.: Would you say, that you turned into a more complex and matured brand of death/thrash and the death metal part in your sound was unmistakable increased and much more dominant than before?

Nicke: Absolutely, we developed as the band and the new songs were more professional.

L. D.: Although you offered more sophisticated material, you didn’t lose any single piece of their brutality, don’t you?

Nicke: No, we were more brutal with the new songs.

L. D.: Which channels did you promote the demos through? Did you send them for fanzines, magazines, labels? Did you shop them around to attract some labels interests?

Nicke: We sent only the first demo to fanzines, magazines, labels and Earache Records what interested in to sign us but we fucked that up.

L. D.: If I’m correct, Full Of Hate has been never officially released, hasn’t it?

Nicke: That’s right but now we released both demos on vinyl and CD.

Nicke: Yes, and you can find these songs on the CD.

L. D.: By the way, did you have songs written, that never made up on any Leprosy efforts?

Nicke: I think we have a few songs that we never recorded in the rehearsal room.

L. D.: What about live situation? Have you gigged a lot both in Sweden and outside of Sweden?

Nicke: We played two times in Sweden and one gig in Denmark, then we played 3-4 gigs in Germany.

L. D.: Despite delivering a quite convincing brand of thrash/death metal, you unfortunately never got signed and weren’t able to present your killer tunes to a wider audience. How do you explain this?

Nicke: The problem with Leprosy was that few of us started using a lot of drugs and chose the drugs instead of music. If we didn’t use drugs I’m sure we could be as big as Entombed. We were a really good live band and we gave everything when we played live. So some of us destroyed this dreams with drugs.

L. D.: Why and when did the band split up? What kind of reasons did lead to the demise of the group?

Nicke: The drugs and the jail splitted up the band.

L. D.: Were all of you involved in several acts after Leprosy? Did you remain in touch with each other?

Nicke: Yes, Me and Svärra continued in other bands. I play in Haven and Svärra plays in Cloudscape today, Mange & Peo didn’t play in bands anymore but Micko plays in a band.

L. D.: Two years ago To The Death Records and Cryptorium Records (former on vinyl, latter on CD) released a compilation Death to This World containing your both demos. How did that happen? Were all of the Leprosy bandmembers involved in the project?

Nicke: To The Death Records had a contact with me and they wanted to release the demos on vinyl. I thought that’s a joke but they was really serious and I said: go for it! Cryptorium Records talked with Svärra and he said the same. Me and Svärra from the band was only involved in this. 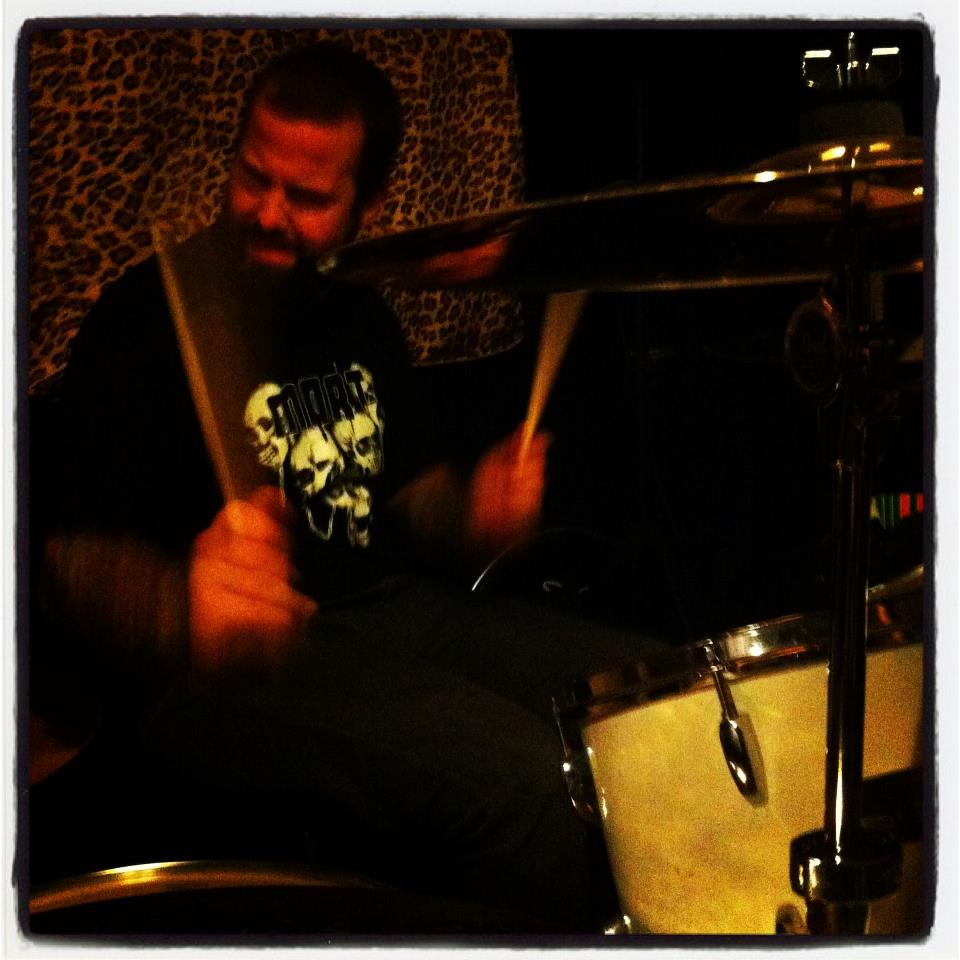 L. D.: Was it done only for die hard fans? What kind of goals did the compilation serve?

L. D.: Is the release sold out or is still available?

Nicke: The vinyl sold out but we have CD’s yet.

L. D.: Do you consider the material as a true convincing testament?

Nicke: Hahaha! Yes, I think it is.

L. D.: What are your best and worst memories during the Leprosy period?

Nicke: The best are all the live shows. I miss them so much, we kicked some fucking ass live. The worst is the split up.

L. D.: Nicke, thanks a lot for the interview. Anything to add, that I forgot to mention?

Nicke: Thank you! I have a dream to make a Leprosy reunion, so we will see what happens in the future. More will be revealed.